It's that time of year again, the time when fresh foods are abundant and reasonably inexpensive. Through a friend's church, I was able to get boxes of peaches for $15 a box, so we bought three boxes. We fresh-ate a lot of the peaches. My hands-down all time favorite fruit is peaches, so it's no surprise that half the top box was empty by the time I got around to canning them. 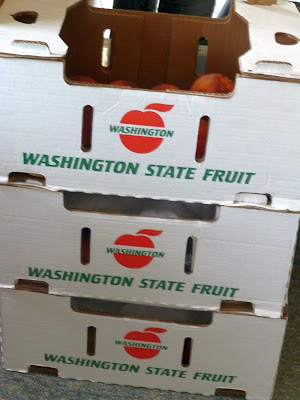 I wasn't sure how many jars I'd need, so I started by washing twenty quart jars. The girls were gone for a day -- busy cleaning motel rooms for a neighbor who owns a motel -- and I sorely missed their help. 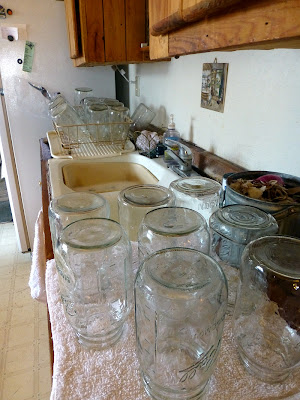 I found one jar with a nicked rim, so I pulled it aside. Chipped jars won't seal. 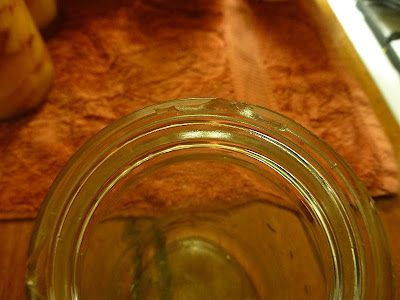 I labeled it and put it in the pantry for storing dry items. 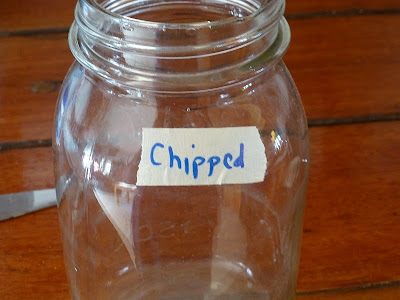 First task was to boil water so I could dip the peaches and slip the skins. I found that processing ten peaches at a time worked well. 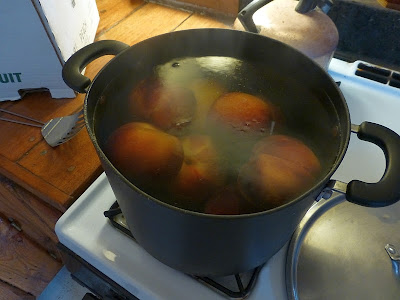 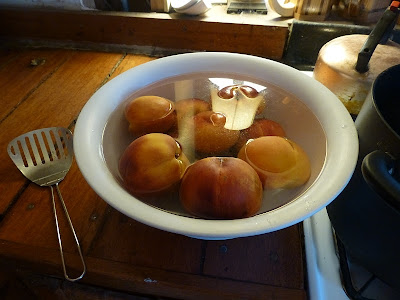 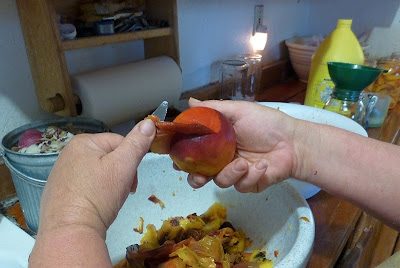 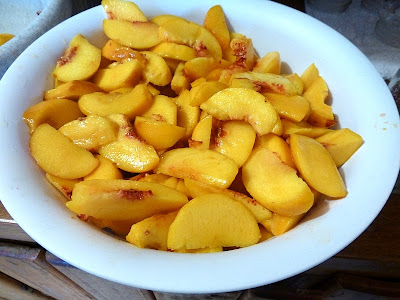 As I filled each jar, I added about a tablespoon of lemon juice to slow browning. 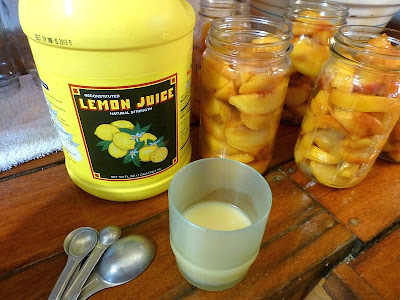 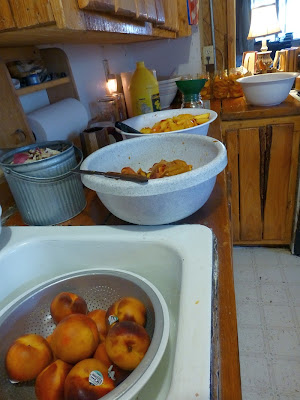 I ended up with twenty-two quarts. Not bad. 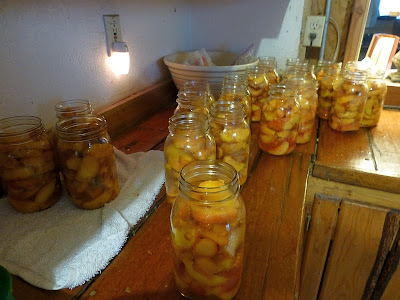 Scraps. I thought about making some fruit vinegar, but decided not to since I still have a lot of vinegar left. This bowl of scraps went into the compost pile. 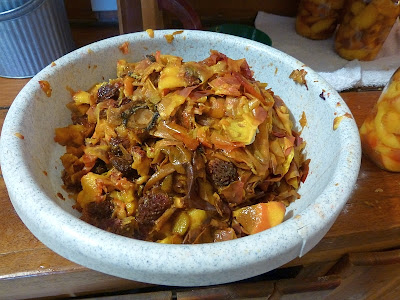 Making syrup. I prefer a light syrup, which is a 2:1 ratio of water:sugar. 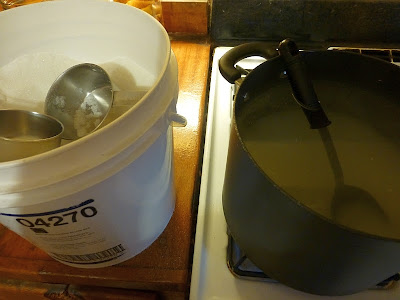 Topping the jars with syrup. 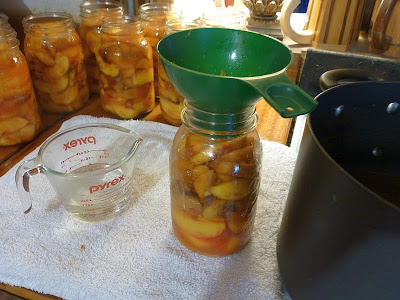 I pulled out the rings I needed... 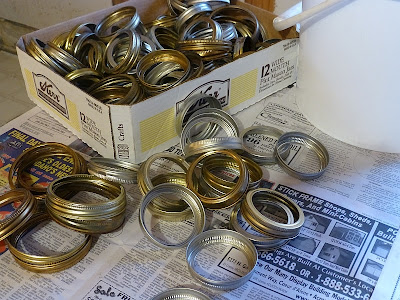 ...and scalded the Tattler lids and gaskets. 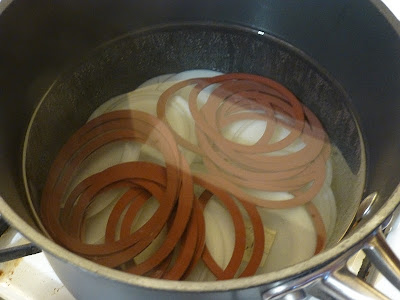 Peaches can be water-bath canned (30 minutes for quarts), and my two biggest pots held twelve quarts between them. 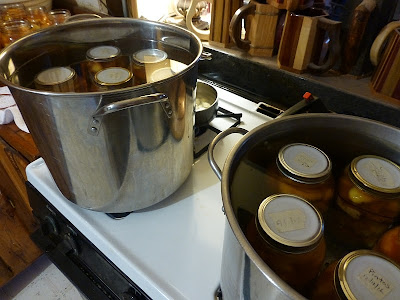 I started cleaning up the mess while the first batch processed. The floor was sticky, so out came the mop. 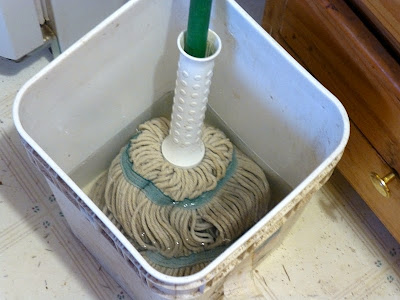 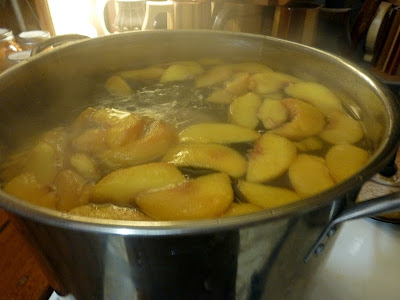 Lost a jar. It happens. 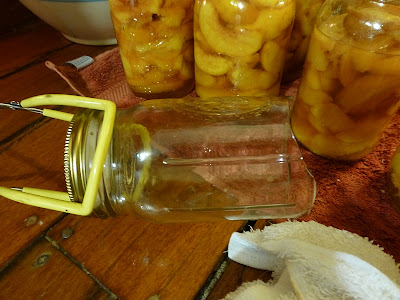 By the time second batch of jars were out and cooling... 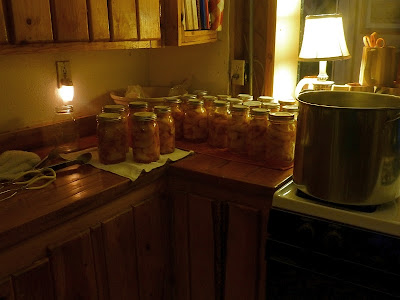 ...it was well past 10 pm and I was staggeringly tired. All-day canning sessions are tough. 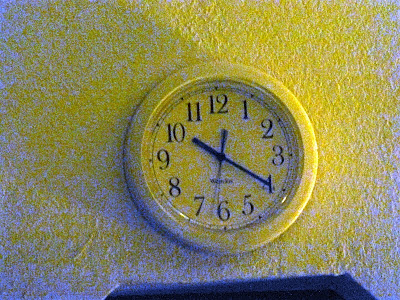 The next morning I made sure to wash the very sticky jars. It's normal for the jars to vent during processing and cooling, which left them very sticky on the outside. I gave each one a good scrub. 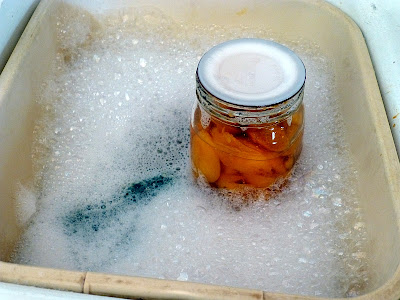 Cleaned and ready to store. 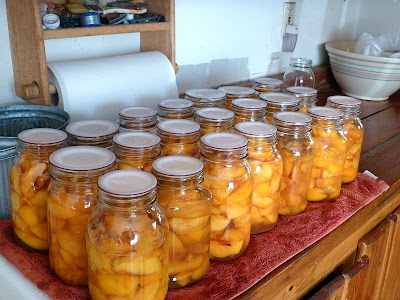 I also scrubbed my rings, particularly necessary after a sticky project like peaches. 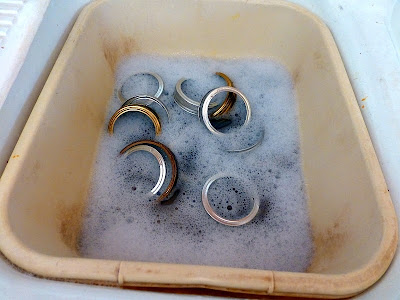 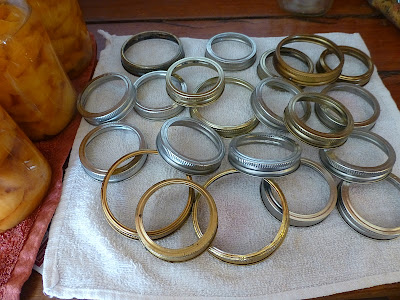 I'll be doing a lot of canning this fall. Peaches? They're just the beginning.
Posted by Patrice Lewis at 8:49 PM