A couple of days ago, our friend and neighbor Enola Gay put up a blog post about her 17 year old son's ambition to become a butcher. As homesteaders who frequently call upon the services of butchers, I can think of no finer and more useful profession. This young man has a solid career path open to him which virtually guarantees employment no matter how dire the economy. 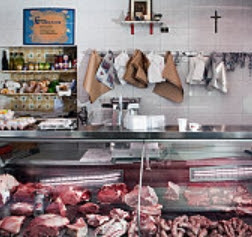 But someone, it seems, took exception to his path in life and wrote a comment on her blog post, to wit:

Why don't you get Mr. Dumb Ass, er, I mean, Mr. Hand Grenade into a college so that Mr. H.G. won't be yet another loser walking around armed waiting to go postal when the world, which he is not prepared for, overwhelms him and he realizes that he is a working class cog and will never get ahead or have anything on a butchers wages.

The words were vile, of course, but Enola handled the snarker with her usual class and grace.

Now hold these thoughts in mind for a few moments while we switch to another scenario.

My husband brought to my attention a blog which mentioned a recent college graduate named Andria who has an “Honors BA in Social Justice and Peace Studies” and is pursuing a Master’s degree in Gender Studies.

And how are these lofty degrees serving her? She writes: "I have a honors BA and I’m defending my MA thesis in two weeks. I am also apply for jobs and I can only find stuff in the service industry. I applied for a Hotel Front Desk Clerk job today. My degrees mean NOTHING. I am at the end of my rope."

Andria may sneer at the service industry, but it begs the question: Where does she want to work? Or perhaps more pointedly, where does she EXPECT to work? Who hires Gender Studies majors?

I don't mean to be snarky or to denigrate certain areas of study; I genuinely want to know. Who hires Gender Studies majors? 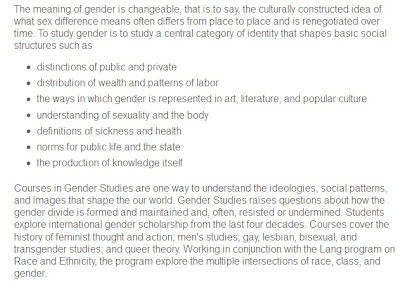 It makes me wonder what on earth Andria was thinking when she decided to devote five or six years of her life and possibly acquire a heavy student loan debt in order to obtain degrees which are hard to utilize in the best of times but essentially become useless in a bad economy. Did she think through her career path ahead of time? Did she look into the number of paying jobs available to Social Justice, Peace Studies, and Gender Studies experts?

As Vox Day so cuttingly put it, "And she just figured this out NOW? She has a degree in 'Social Justice and Peace Studies.' She will soon have a second degree in 'Gender Studies.' She's very lucky the service industry will consider hiring anyone with a pulse, because any employer looking at those degrees has to knows she is a walking, talking, sexual harassment and/or discrimination lawsuit waiting to happen. In fact, a Gender Studies degree actually has negative value, given that credentialed feminists are considerably more likely to cause disruption in the workplace. It's bad enough to acquire garbage degrees in economic boom times. It's even worse to do so in the middle of a five-year depression."

This is harsh, yes, but I see his point. I don't know if I'd be inclined to hire her either.

All this makes Master Hand Grenade's choice to become a butcher seem wise, forward-thinking, and intelligent. Not incidentally, since I'm well acquainted with this young man's character, I'd hire him in a heartbeat for ANY job, including hotel front desk clerk.

For those who think Gender Studies majors are somehow morally superior to "working class cogs" like butchers, please check back in ten years and let's compare Master Hand Grenade's and Andria's career paths.