On establishing a neighborhood watch

Following is a guest post from Naomi Broderick, a rural mother of three who writes on behalf of Protect Your Home, an authorized dealer of ADT Security in Phoenix, Arizona.

(As a personal side-note, years ago we needed a security system for an office where I used to work. The office had mice in it, so standard security systems wouldn't work because the movement of the mice would trigger the alarm. After some research, we contracted with ADT Security (which silently monitors by sound) and were very pleased with the result -- especially after a thug threw a rock through an office window and tried to make off with some equipment. He was caught on the premises.)

_________________________________________
Before our colonies even became a nation, and before our modern era of home security equipment and alarm systems, town watches were the answer in keeping neighbors safe. These organizations were formed on mutual trust out of the common interest of protecting everyone’s families from wrong-doers and domestic disputes.

While they’re called “neighborhood watches” these days, the essence of these groups remains the same. While keeping home surveillance or firearms available to defend yourself can be effective in deterring crime and taking action, there’s a certain sense of peace in a neighborhood watch that money can’t buy. They represent the sense of security that bonds a community, and the fabric of good will towards neighbors that defines American suburbia. 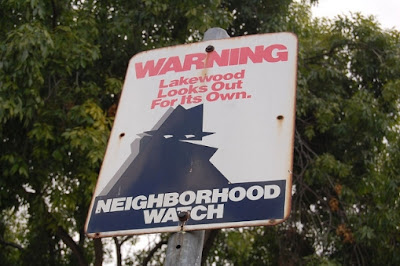 More important than what they represent is the fact that they’re darned effective. According to the FBI’s neighborhood watch statistics, communities with such watches have a reduced crime rate of up to 43%. On top of deterring crimes, these programs are fantastic at locating and reporting crimes when they take place. They also help citizens in cases of accidents, fires, or other emergency situations.

Many skeptics call foul with these programs as being a way for mavericks to take the law into their own hands, but the true role of watches is to observe and contact authorities when something seems amiss. Given their help in aiding authority, these programs have also been prided among many communities as developing better relations between residents and the authorities.

If you live in a rural or developing suburban neighborhood, it’s very possible that your neighborhood lacks such a watch program. You can locate watches in your neighborhood using USAonWatch’s locator. It can be difficult to establish a credible watch alone without competing with the voices of other watches; ideally a neighborhood would have one unified watch in which everyone is on the same page.
But if you’re unsuccessful in finding a neighborhood watch to participate in and care for the welfare of your area, it might be a great time to register your own watch with your neighbors. Some essential components for any neighborhood watch are:

• A group of committed neighbors with sound judgment and a respect for legal boundaries to plan and execute a watch schedule
• A means of regular communications, such as a mailing list, e-mail addresses, or cell phone communications
• A meeting place, such as a resident’s home or a community center
• The involvement of an officer of the law to help train members (contacting authorities to explain your desire to start a watch will often allow them to offer you an available officer)
• Brochures on appropriate watch conduct and protocol

It’s also crucial to hold meetings regularly, and be sure to keep up with certain trends and hotspots related to crime in your area. For more specifics on starting your own credible neighborhood watch on protecting your home and neighbors, see more information in this manual.

Posted by Patrice Lewis at 1:05 PM