In the past, I've received emails from readers asking what books we use when teaching our daughters. I figure now is as good a time as any to go over what we're using.

Please remember this is what we're using at the moment. Our resources are fluid and often change.

We don't use pre-packaged curriculum. Besides being beyond our price range, we prefer the flexibility of what we call the "wing it" school of teaching. This means we can draw our core subjects from a variety of resources.

The basic topics we cover are:

Math
We've had excellent success with the Spectrum Math series, which carried both girls through 8th grade. Unfortunately that's where it stops, so it left us floundering for additional resources until we found a few that worked. 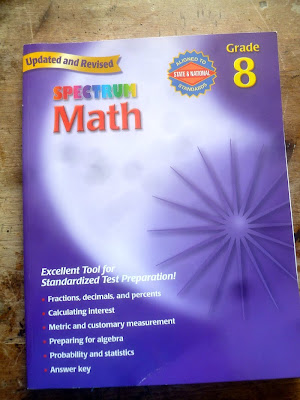 Right now Older Daughter is finishing up Algebra. We've used a number of different books for her. 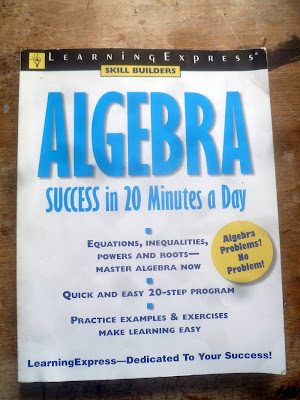 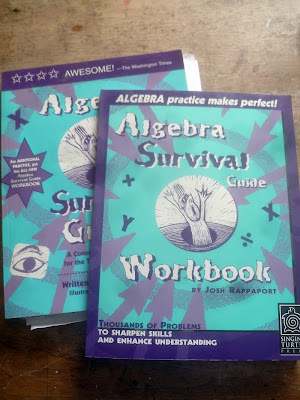 We have books in reserve for geometry and advanced algebra but haven't started them yet. Younger Daughter is working through the last of the Spectrum books.

Science
Despite both Don and I having master's degrees in the sciences, I was groping a bit. We have tons of resources, of course, but I lacked a logical progression of the various fields. We worked through some very nice books but couldn't find anything more in-depth. 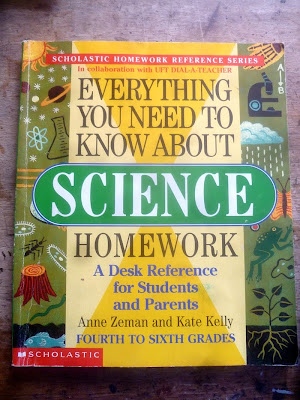 I finally got some guidance from a science series put out by Classical Conversations. 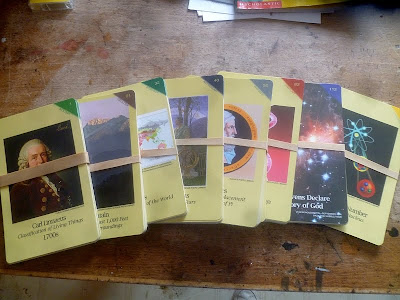 These cards are merely guides, which I then back up with numerous other resources we have at home, in the library, or online. So far they've proved very useful, providing overviews of biology, geology, astronomy, anatomy/physiology, etc., along with the famous scientists who contributed to each field. 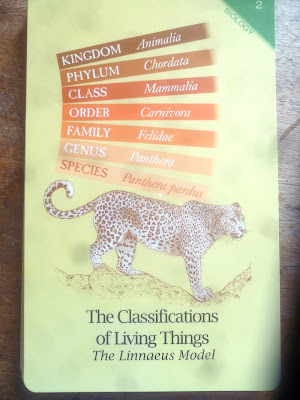 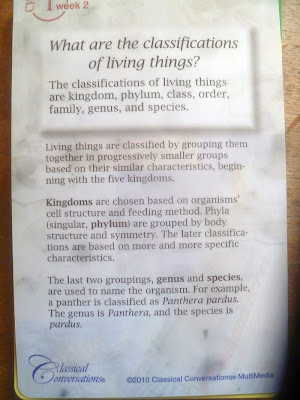 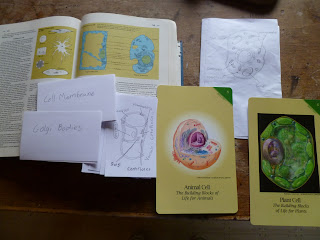 History
Don and I are history buffs, so we have dozens -- maybe hundreds -- of books on various periods of history. It was a little more difficult to find a good comprehensive overview for the kids, though. Some of the Christian history books were too skewed toward a Christian perspective, to the point where I felt history was distorted. I found the same with modern text books, which are almost comically negligent about religious influences through history (not to mention lots of PC re-writing of history).

For world history we started with A Child's History of the World, purchased through the Calvert School. 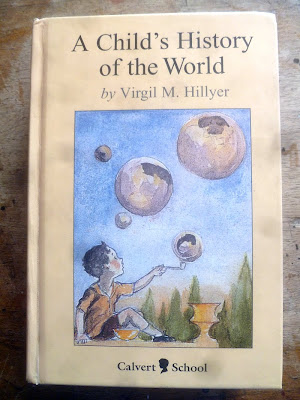 We supplement world history with lots of resources, including the Usborne Encyclopedia of World History... 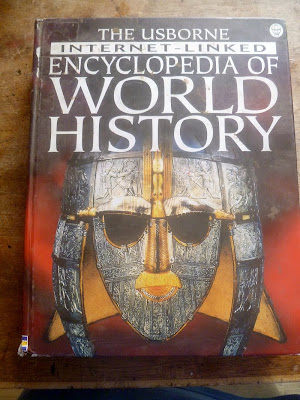 ...which has beautiful illustrations. 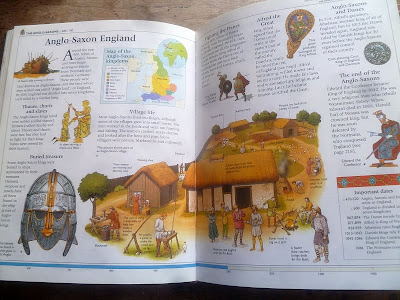 For American history, we worked our way through the excellent 12-book series History of the United States (put out by Golden Books). Unfortunately this series was written in the early 60s, so their history stops at that point. 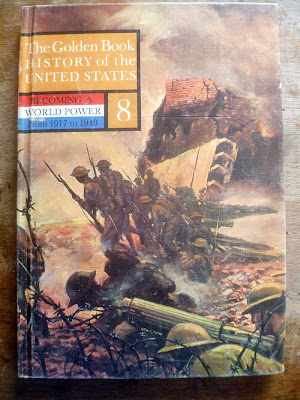 We supplement with lots of other sources, such as Don't Know Much About History as well as our set of World Book encyclopedias, etc. 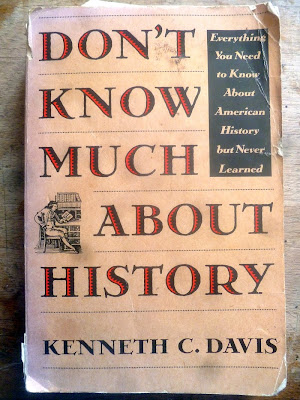 Right now Older Daughter is working her way through this text, picked up at a library sale. She finds it interesting but very "PC." 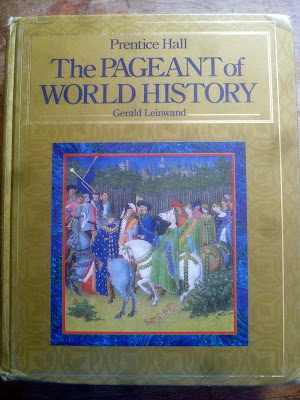 Civics
For civics we're still using Bruce Gorden's Self Evident Truth, which is the guide the girls used when memorizing the Declaration of Independence. 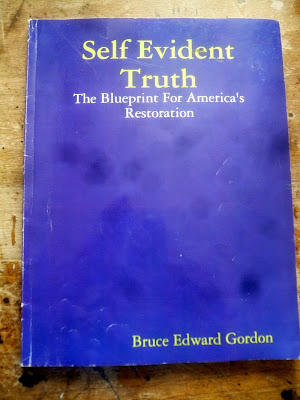 Since we do a lot of political writing, needless to say we have a large number of resources around the house. But specifically for the Constitution, we'll soon be starting a 10-week course on this document put out by Hillsdale College called Constitution 101.

English
Now this is a funny subject to address, because we don't really study it.

A few years ago we were trying the usual round of spelling tests, writing assignments, etc., and for a variety of reasons they just didn't work with my girls. As a homeschooling mom, I learned there are times to back off and leave something alone. As a writer, I didn't want to be a "stage mom" and insist the kids write write write (I didn't want them to learn to hate writing).

So I left them alone. And you know what? They're excellent spellers and excellent writers. Comes from all that reading, don'cha know. I've always told them if they can write like educated young women rather than a couple of texting monkeys, they'll be miles ahead of the curve. So far so good.

Oddly enough, for a professional writer my grasp of grammar is purely instinctive. We have grammar references, and the girls are forever asking me to clarify points of punctuation, such as the proper placement of apostrophes. 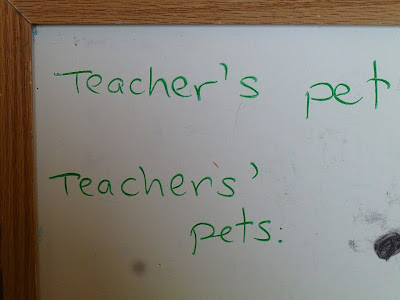 Required Reading
Needless to say, with over 5000 books in our house, there's no shortage of reading material. Nonetheless, there are certain classics I want the girls to work through. 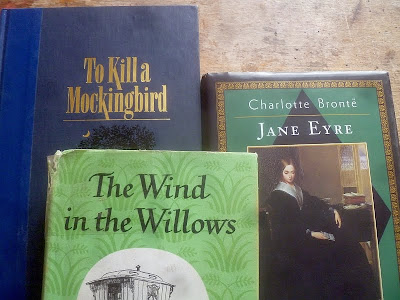 There's all kinds of lists of books every high schooler should read which can be found online. While I'm not following any of these lists slavishly, I'm finding a lot of good recommendations.

Geography
This is a subject about which I feel strongly. There are far too many pathetic examples of high school kids who literally cannot find the United States on a world map. Not my girls!

We started with this oversized children's atlas, bought at a library sale when they were toddlers. It's been very useful... and still is, when we need a big map. 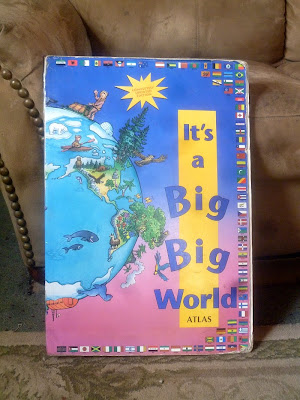 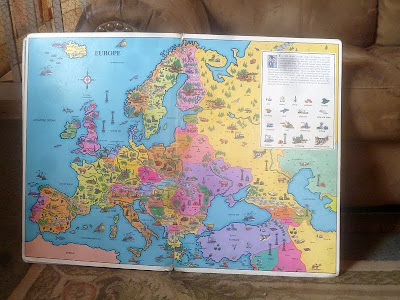 Last year we did states, state capitals, and state locations. 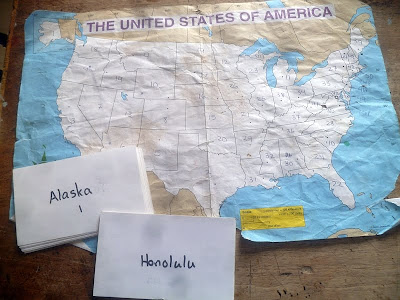 For world geography, we bought a board game called Where in the World?, though we never use it as a game but purely as a learning tool. 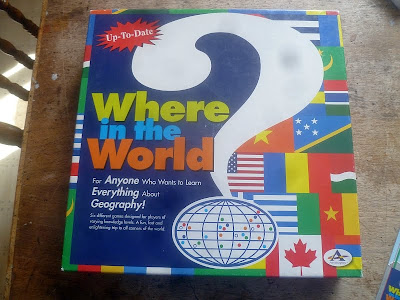 The box contains color-coded regional maps with no names, only numbers. 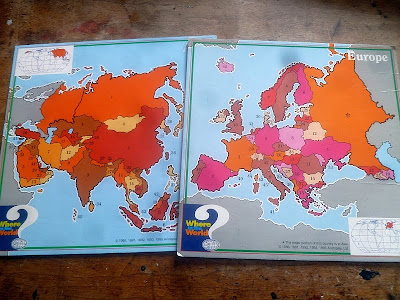 They're accompanied by color-coded cards for each country, divided by region (usually by continent). 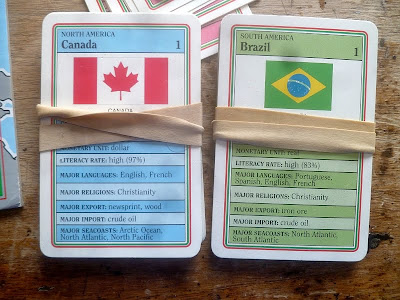 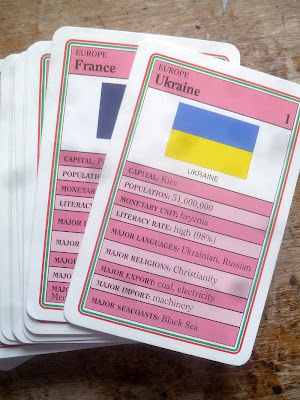 The kids are memorizing the location of every country. They will also learn the capitals of many (but not all) of the countries. We also discuss cultures and environments of various regions and nations as well.

Foreign Language(s)
This was a toughie. Older Daughter needs to concentrate on a language for her future plans as a nanny, so we're studying French... which is the one and only foreign language I studied as a student. (It's bringing back a lot of memories!) 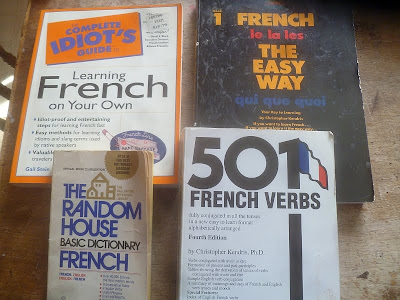 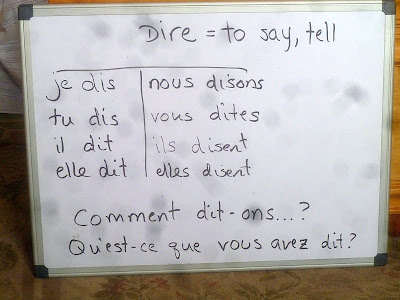 Trouble is, Younger Daughter has less than no interest in learning French (though we make her sit in on the lessons, poor kid). Instead she wants to learn... Japanese. Clearly this is a language in which I have no experience whatever, so she's teaching herself. 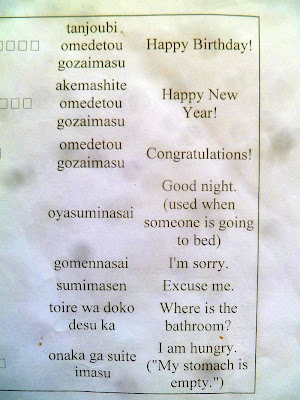 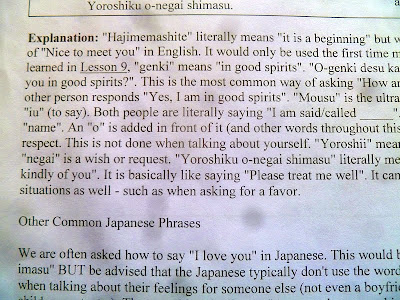 She has an interest in someday teaching English in Japan, so learning the language is very important to her. Unfortunately she's on her own here, but she's driven and fascinated by Japanese culture, so she's making progress with the help of some online sources which aid in pronunciation. 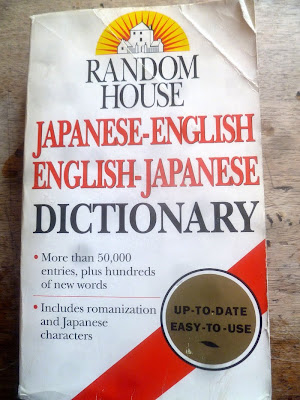 Bible
We don't use any particular Bible resources, though we probably should. Rather, the kids are just assigned Bible readings. 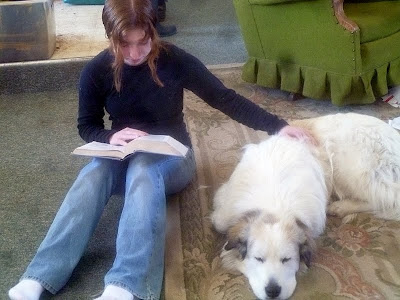 Oddly enough, we seldom use the internet as a teaching tool, though we're aware of its richness. I've downloaded printable versions of such things as the Periodic Table of the Elements, bios of people we're studying, and we've used YouTube clips for watching the process of meiosis and mitosis.

The girls have reached the age where some of their subjects can be studied independently. They often work through history and geography, Bible reading and required reading on their own. Together we go through math, science, civics, and French, and often history and geography as well.

There are zillions of homeschooling resources out there, and unfortunately we can't afford them all. These are the things we've cobbled together within our budget. So far we're pleased with the girls' academic progress and feel proud of their accomplishments.
Posted by Patrice Lewis at 9:01 PM