There is a television series that's just hit the prime time called (pardon my language) Good Christian Bitches (later modified to Good Christian Belles after the understandable outcry). It's made by the creators of "Sex and the City," so I guess that tells you something. We don't have television reception so I've never seen this latest example of Hollywood art, but I gather the basic premise is to show how Christian women are nothing but a bunch of biblical hypocrites. Ha ha -- it's so amusing, don't you think, to watch women be catty? And placing them in a church environment just seals the deal, in the opinion of Hollywood.

(Just as an aside, imagine a Hollywood brainchild called "Good Jewish Bitches" or "Good Muslim Bitches" and see how quickly the producers would get flayed. But hey, it's open season on Christians.)

This show is apparently full of splendid advice, such as "cleavage lets your cross hang straight" and other useful suggestions. 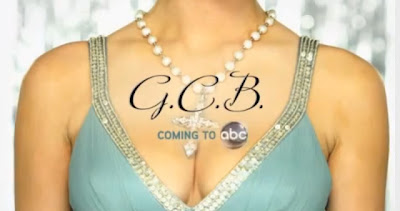 As I see it, this is just the latest example of Hollywood's absolute disdain for Middle America and its values. I was going to link to a trailer to demonstrate my point, but after watching it I didn't want my girls to see the shocking content, so I found another, slightly less racy trailer (here). And keep that in mind: the first trailer I found was so shocking I didn't want my girls to see it... yet this show is now on prime time television, where young people all over America can hear the catty language and watch the degrading situations played out in this sitcom. 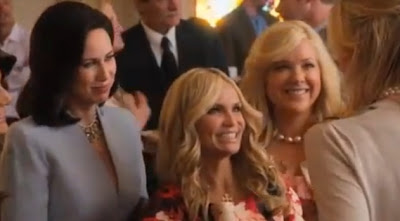 As with any television show, the actors and actresses involved are drop-dead beautiful. But what good is all that beauty if its purpose is to ridicule and scorn an enormous segment of our nation? Its whole essence is the mockery of values, particularly Christian values. Such ideals as modesty and chastity are held in contempt as unattainable and unrealistic (and unnecessary) goals. The nuclear family is shown as dysfunctional (of course) and a source of oppression for women (of course). It's considered "empowering" for women to dress like skanks and seduce men away from their marriage vows. It's sole purpose, apparently, is to illustrate (with the help of lots of cleavage) how religion is bad.

But no one ever talks about how religion is good -- how many lives have been turned around, how many overwhelmed people have found solace, how many challenges have been overcome because of faith (and this doesn't even examine how many souls are saved).

What it comes down to is Hollywood's persistent ambition to demonstrate how secular life is vastly superior to religious life. The pious are hypocrites and idiots. All devout church-goers are in reality closet deviants bent on fulfilling their animal urges. And somehow, in some way, Christian values are to blame for it all.

Now this petty and superficial television show is moving into the prime time, where countless numbers of young people, whose faith may still be fragile, will fall under its outwardly-beautiful and glamorous sway.

So anyway, this morning I was writing this blog piece and getting on my high horse when I got bumped down to earth by a sobering piece written by columnist Dennis Prager. It seems he and his wife, who are traveling in Australia, met a young waitress from Iran who was raised Muslim. Due to the violence she saw around her while growing up, she now considers herself an atheist.

"Nothing produces atheists like despicable religious people," writes Prager. "They do far more harm to religious faith than all the atheist writers and activists in the world put together."

This statement made me wince because there are far too many times when Christians are seen in a similar light. While I can't go into details, let's just say I'm in a position to see a LOT of chatter back and forth between the political left and the political right, between atheists and Christians, between progressives and conservatives. Many people will claim that conservatives are more verbally restrained than the name-calling and vitriol that marks the left; but I'm here to tell you it ain't necessarily so. There is just as much mud-slinging, name-calling, and nasty language coming from so-called Christians; and it serves to reinforce every bad opinion atheists could ever hold of us.

As a Christian I am held to high standards, standards I continuously fail to meet (which is where forgiveness of my sins is so comforting). Nonetheless those standards are there, and I must strive toward them. I must guard my tongue and my (typing) fingers from falling into the classic human failings of gossip, name-calling, and hypocrisy. In other words, I -- and every other person who calls him or herself a Christian -- must be ambassadors for our faith. We must represent the goodness and mercy of Jesus, not the gossip and slander that GCB illustrates.

I'll fail, of course. But at least I have a Higher Authority to whom I can lift my fallen eyes and beg forgiveness.

But you still won't catch me watching Good Christian "Belles" any time soon.
Posted by Patrice Lewis at 8:36 AM