Since canning has been on my brain lately, I decided to make and can a batch of split pea soup, a particular favorite of Older Daughter.

I started with two pounds of split peas and four quarts water, which is as much as my Crockpot will hold. If it held more, I'd have made more. 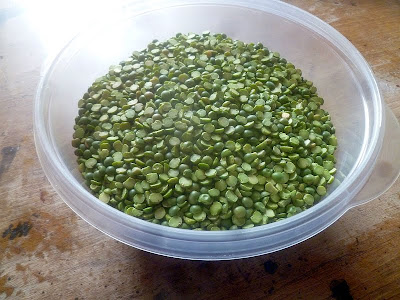 Older Daughter is something of a purist when it comes to split pea soup. She doesn't care for any other veggies in it, such as onions (which make her gag) or carrots. So, I just added some spices -- onion powder (which doesn't make her gag, go figure), garlic powder, cumin, salt, and pepper. 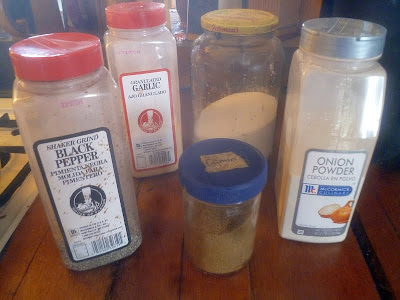 The recipe called for ham, but we didn't have any. We did have some bacon though, so I cut that up... 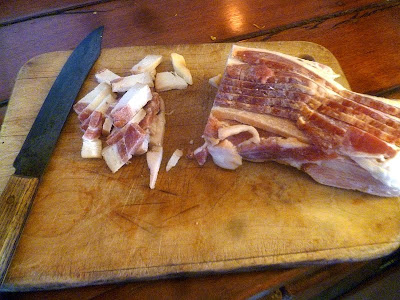 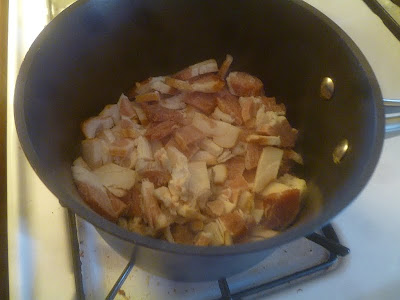 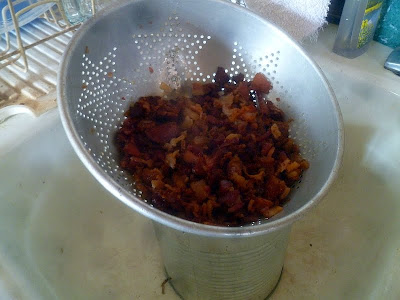 ...and added that to the soup. It doesn't stay crispy, but it tastes good. 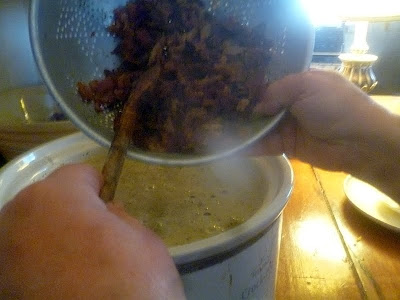 I let the soup simmer all day and we had some for dinner, then I put the crockpot in the refrigerator overnight because it was too late to can it.

The next day I re-heated the soup to boiling. 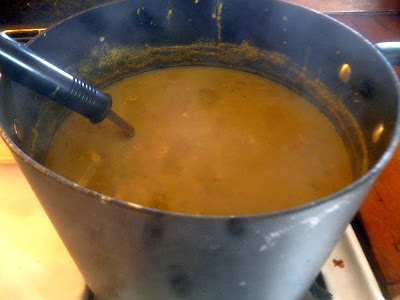 Meanwhile I washed some jars. I wasn't quite certain how many I'd need, so I washed sixteen, which turned out to be way too many. 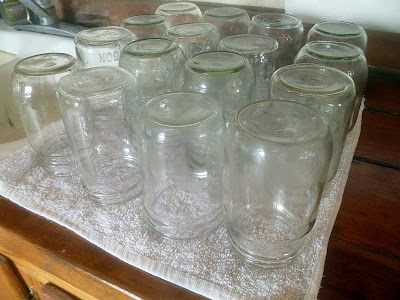 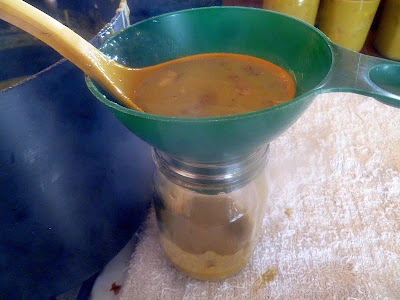 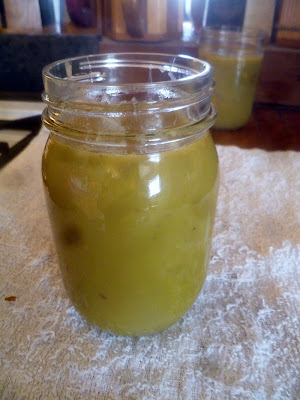 I like to leave about an inch of headroom in each jar. 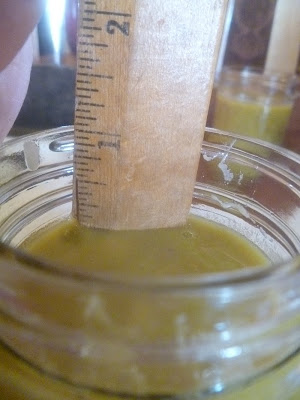 I ended up with nine pints. 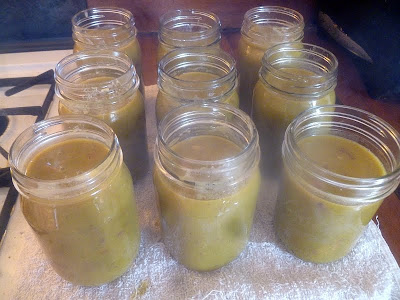 Scalding my Tattler lids and gaskets. 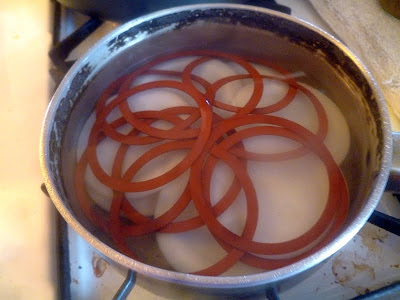 By the way, a note on rings: discard them when they get too rusty. I just threw out the ring on the right. When a ring gets rusty like this, for some reason it doesn't do as well keeping the lids in place while canning. 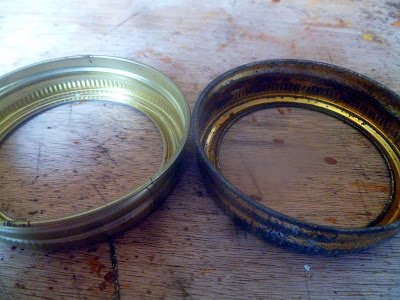 A pressure canner needs about two or three inches of water in it to create steam. Never can in a dry canner -- you'll ruin it. 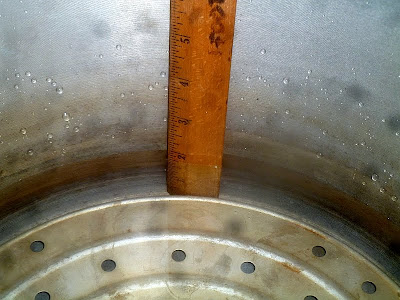 I got all nine pints on one layer. 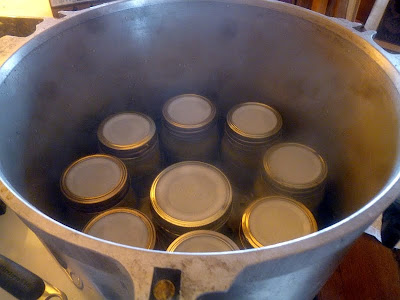 Once the lid is on, I heat the canner until the water inside is boiling and begins to produce steam. The canner must vent for about ten minutes -- and this means the steam is screaming out for ten minutes. (Bad photo, sorry.) 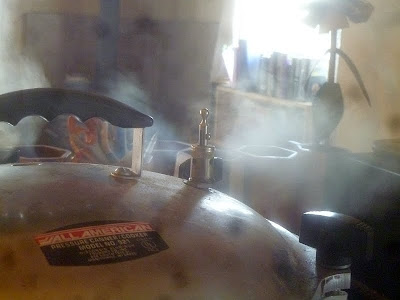 After that I flip the petcock closed and let the pressure start to build. It takes my canner about 15 minutes to build to twelve pounds of pressure, which is the pressure I need for our elevation. I need to keep a close eye on the gauge during this time so I don't overshoot and build the pressure too high. 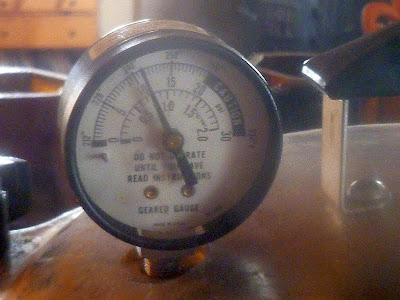 Only when it reaches this pressure do I start timing the processing time. Because the soup has meat in it, and because it's in pint jars, it needs to be canned for 75 minutes. And here, in my humble opinion, is the secret to successful pressure canning: kitchen timers. I keep one set for the full processing time (left), and one I keep clipped to my collar to beep in five-minute intervals, to remind me to check the pressure. 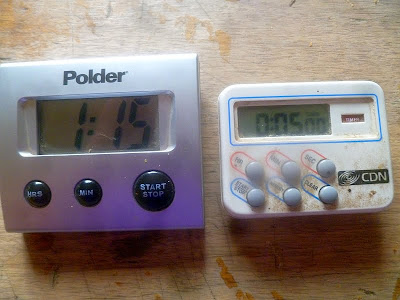 After the soup was processed, I pulled them out of the canner and put them on a towel to cool. I let them cool overnight before removing the rings to make sure they sealed. 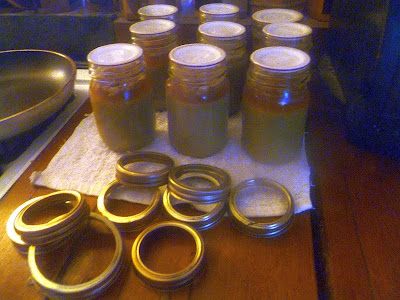 The "morning after" aftermath of an evening spent canning -- canning stuff all over. 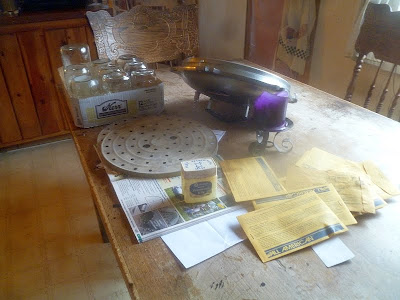 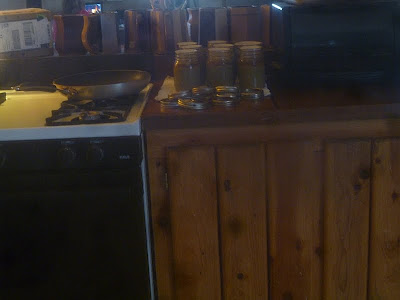 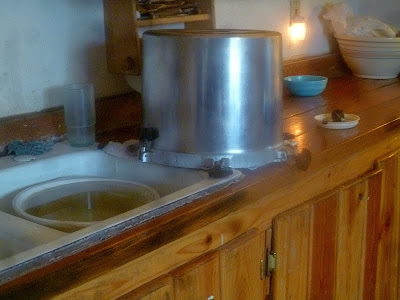 The building of a nice pantry-ful of home-canned goodies is by doing this kind of thing once a week or so -- adding a few more jars here and there.
Posted by Patrice Lewis at 9:14 AM