The beauty of bakery buckets

During my radio interview last Friday evening (which, by the way, can be heard here), the subject of bakery buckets came up. I mentioned such buckets in my BWH article The Seven Core Areas of Preparedness, but only as an aside. In fact, only as a caption on a photo. This was because I assumed everyone knew about bakery buckets. Seems I was wrong. 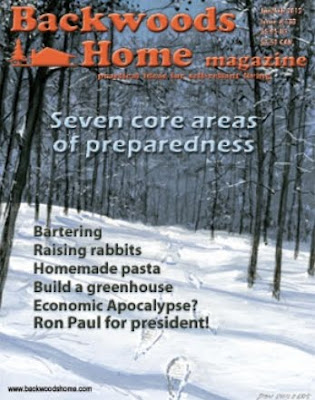 Back in our naïve days of preparing for Y2K, Don and I bit the bullet and bought 24 five-gallon buckets with screw-on gasketed lids. These have been superb buckets and we still use them, but they were expensive. Bakery buckets are a far better deal.

Bakery buckets are quite literally a prepper’s best friend. For the last couple of years, I’ve made it a policy to stop at our local grocery store’s bakery department and inquire about buckets. Sometimes there aren’t any available (others beat me to them), sometimes there’s only one or two, and sometimes I hit the jackpot.

One time on a happy “jackpot” occasion, I pushed my grocery cart around the store with eight or ten buckets inside, as I finished my shopping. A rather intense woman came up and asked, “Where did you get those buckets?” I replied that I'd gotten them from the bakery department, but apologized that I’d just cleaned out their available supply. “Check back often,” I told her. “They keep them for anyone who wants them.” While nothing was said about the purpose, I got the distinct impression this woman was a novice prepper who was thrilled to find a source for buckets.

Here are some advantages of bakery buckets:

• They’re cheap or free. Bakeries go through large quantities of icing, sliced fruit, fillings, glazes, and other sweets. Delis go through pickles and condiments. Once empty, those buckets will stack up. They’re almost always willing to get rid of them to eager customers. If they’re not free, most buckets will sell from fifty cents to two dollars each, a bargain. (Always be sure to get the lids!)

But watch it – not every bakery is generous. This isn’t a reflection on the bakery staff; it’s usually a company policy. I’ve found both Winco and Costco won’t sell bakery buckets for whatever reason, which is a pity because the bakery departments in both chains must go through buckets like crazy. A slight correction on Winco – they have buckets for sale, but last I checked they were at the exorbitant price of $6 each. That’s nonsense – there’s no reason to spend that much when other bakeries sell them at a fraction of the cost.

• They’re pre-cleaned. (Usually.) In my experience, the bakery staff is usually apologetic if the buckets aren't clean, and sometimes they’ll even ask if I can wait for a few minutes while they put the dirty buckets through the industrial washing machine (which takes about five minutes). Whatever was originally in the buckets was likely to be sticky, so having pre-cleaned buckets is a great blessing. On the other hand, the occasional unclean bucket is no big deal; a quick scrub with soap and water will usually suffice.

As a note, restaurants also go through many buckets and often sell or give them away – but they’re likely to not be cleaned. Just a head’s up.

• Buckets are pest-proof. They guard the contents against moisture, rodents, and insects. This doesn’t excuse you from using Mylar bags, dry ice, oxygen absorbers, or whatever other technique you prefer to keep existing insects from decimating your stored food; but it means outside insect or moisture problems are far less likely.

• The volumes are decent. Buckets range from two to five gallons; the average size is 3.5 gallons. A 3.5 gallon bucket holds about 25 pounds of heavier items like rice, beans, flour, powdered milk, sugar, or cornmeal. (Oatmeal is lighter by volume and will hold less by weight.) Five-gallon buckets usually hold about 40 pounds of food. I use two-gallon buckets for storing bulk spices and kitchen aids – pepper, cinnamon, cornstarch, etc. 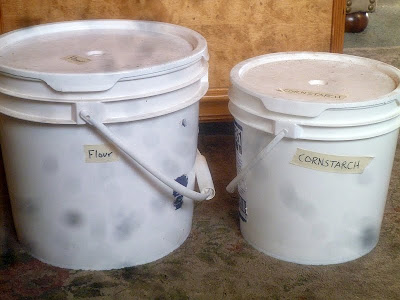 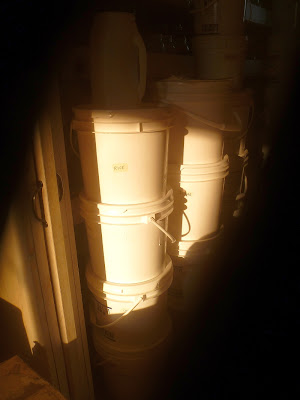 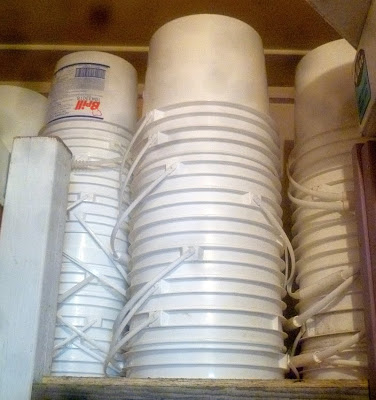 • They’re easy to label and inventory. For labeling, I put masking tape on the top and side with the contents listed in large block letters (always rotate stacked buckets so the tape is facing outward for easy identification). 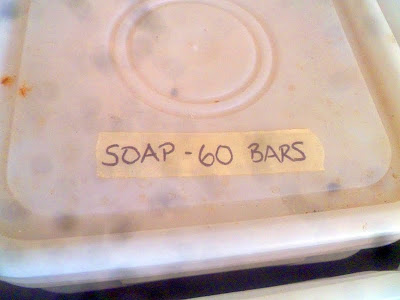 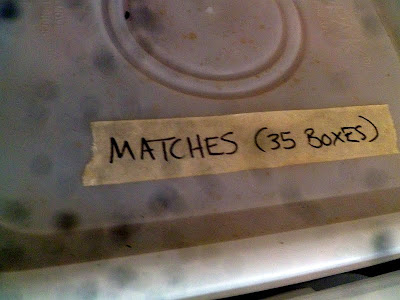 If the bucket contains dry goods, I put the category (such as “Toiletries”) on the masking tape. Then I tape an index card on the top of the buckets with a detailed list of what’s inside. This way I can add or subtract items as I put new things inside or take things out. I prefer not to use indelible markers to write on the buckets because sometimes the contents change. Tape allows me to label as needed. 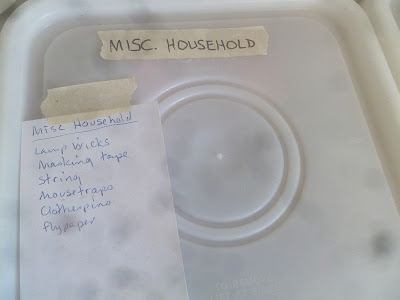 • Buckets have endless uses. They’re not just for storing food or supplies. On a farm, buckets are most useful if they have handles, which bakery buckets do. We use the larger bakery buckets tucked inside an old tire (so it can’t be pushed over) for water inside livestock pens. Smaller buckets can be used as grain buckets. Even cracked buckets have their uses – while they won’t hold water, they’re fine for grain, salts, or other dry uses. My husband uses buckets in the shop to categorize small tools or hardware such as nails, screws, and other fasteners. We seldom discard a bucket unless it’s broken (in which case the sharp plastic edges can be dangerous). 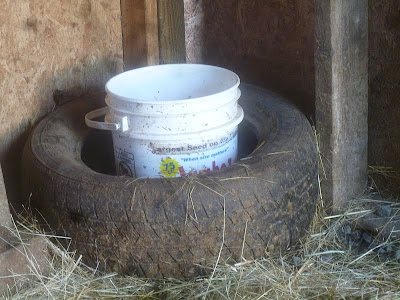 • Charity. My friend Enola Gay has talked about bucketing up pre-packaged charity handouts in the event of hard times. Such charity buckets will hold a respectable amount of food, the contents stay clean and dry; and the bucket can even be used as a stool for sitting.

Buckets usually come in either round or square. 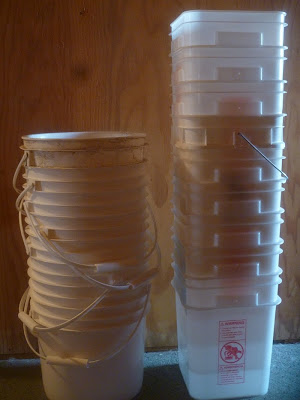 Use whichever size and style you prefer. My personal preference is to use round buckets for food, square buckets for other stuff. 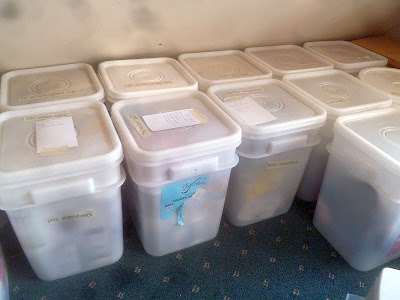 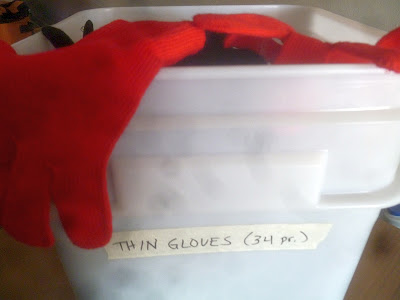 Get a bunch of bucket lid lifters. They’re inexpensive – usually under $5 – and you can keep one wherever you have buckets stored. We have five or six lid lifters scattered around in convenient locations. 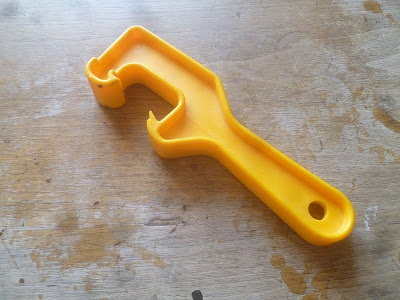 During the radio interview, one of the hosts mentioned how he found 300 buckets for fifty cents each off Craig's List (they came from a restaurant). What a windfall! He could either fill those 300 buckets himself and have an extraordinarily decent stockpile of food and supplies, or he could keep half for himself and sell the other half.

However you look at it, bakery buckets are a phenomenal deal. I urge you to start collecting them today.
Posted by Patrice Lewis at 10:36 AM