We're getting low on hay. 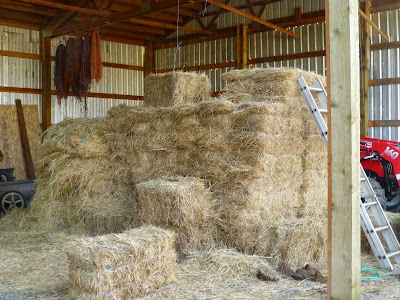 This isn't surprising. Last summer we got a very very bad yield of grass hay from the 25-acre parcel across from us (the absentee owner lets us mow and bale the acreage each year). Yields have been declining for a long time, and last summer hit a new low: only eight tons total, or about 1/3 ton per acre. Good productive fields should yield about two tons per acre.

A fair fraction of those eight tons was pretty lousy stuff, too -- chock full of such inedibles as cheat grass, hawk weed, and St. John's wort (which dries to stick-like brittleness and is like chewing wire for the cattle). 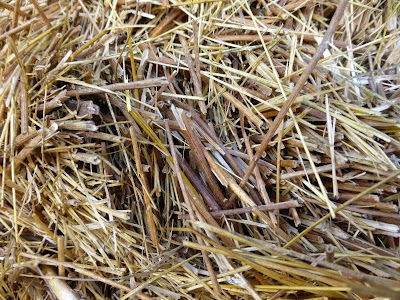 Unsurprisingly we had to supplement by buying some better-quality grass hay to get our animals through the winter. However we didn't get enough, so we just ordered in another ten tons.

To get ready for this incoming shipment, we wanted to clean out not just the barn, but the open area in front of it. You know the saying: nature abhors a vacuum. So do vacant places on a farm.

Don doesn't need much of an excuse to use the tractor. We chained up and moved four tractor tires a neighbor brought for use in the tire garden... 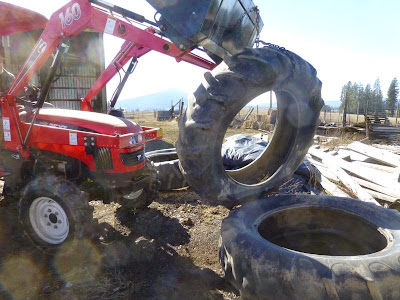 ...moved the bucket attachment of our old tractor... 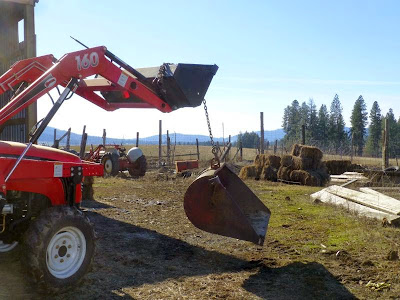 ...and moved some old rotting hay bales that had absorbed so much water they must have weighed 100 lbs. each. (We moved them into the pasture to burn later on.) 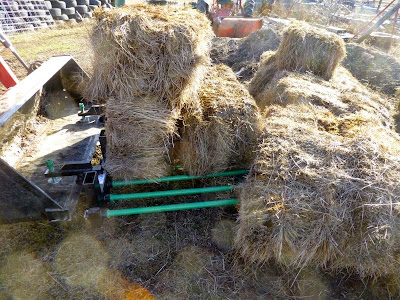 Then we tackled the inside of the barn. 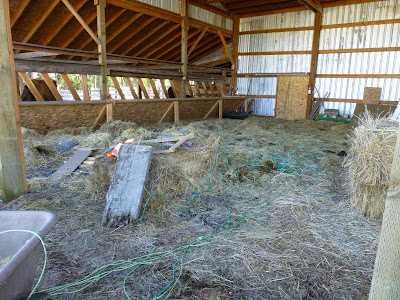 We had accumulated a surprising amount of hay bale twine. This is highly useful stuff (we've toyed with naming our farm Baling Twine Ranch or something) but it can be overdone. We have thousands of strings of twine and don't need it all. So, in the interest of efficiency, we chucked it into the back of the pickup for a future date with the dump. 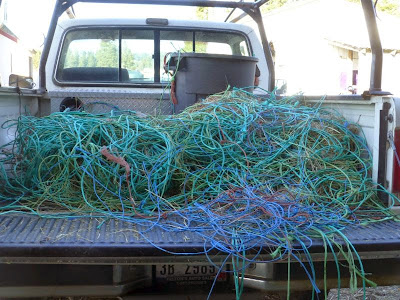 It made rather a pretty and colorful tableau once we moved the truck into the sunshine. 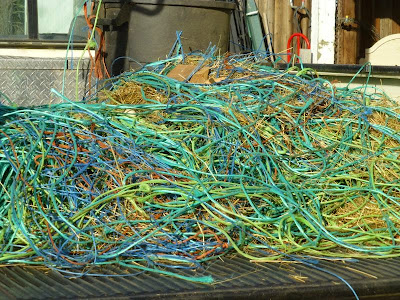 In fact, I found it very artistic. Don termed it psychedelic spaghetti. 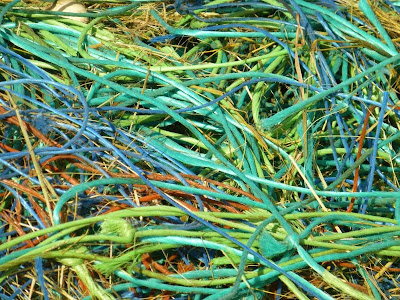 He used the fork/tine attachment on the bucket of the tractor to scoop up the old hay on the barn floor. Normally the old hay wouldn't be a big issue, but since Shadow and Ninja have been in the barn for a couple of weeks, the floor had a fair bit of manure on it. Can't set hay bales on top of manure. 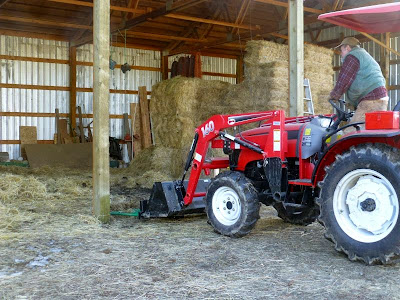 The tines lifted much of the old stuff in a sort of mat... 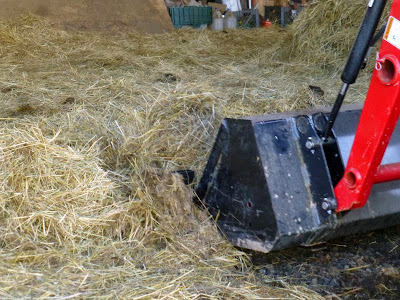 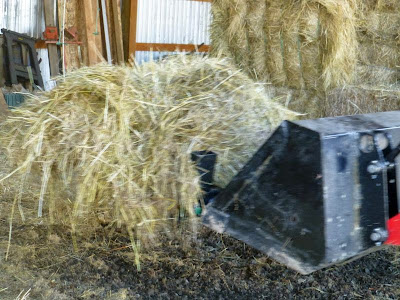 ...and revealed the gravel flooring of the barn. After a bit of work, most of the barn floor was clean enough... 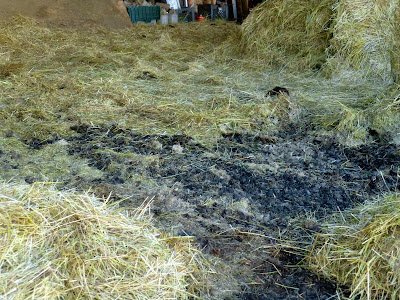 ...and the pile in the field was quite sizable. 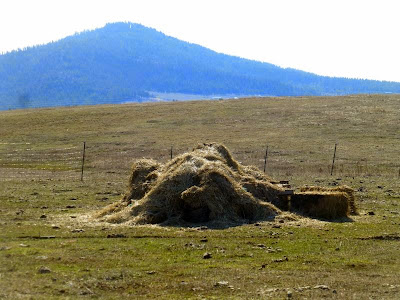 Shadow and Ninja watched the progress. 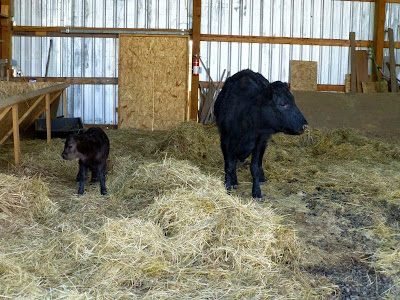 Ninja was fascinated by the tractor, thus proving that a boy's interest in mechanical stuff crosses the species divide. 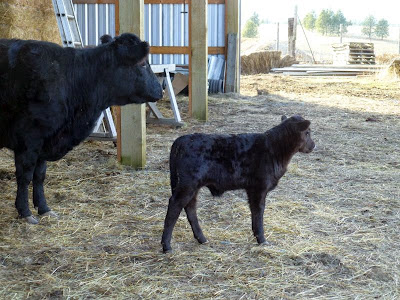 A few days later, a local farmer brought in the first load. 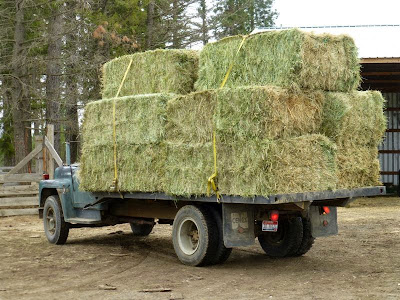 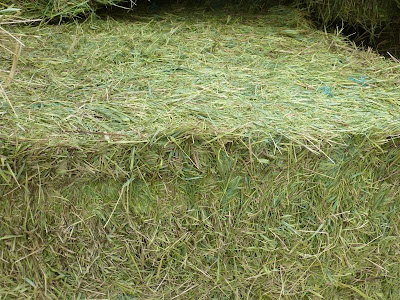 Compare it to what we have in the barn at present. 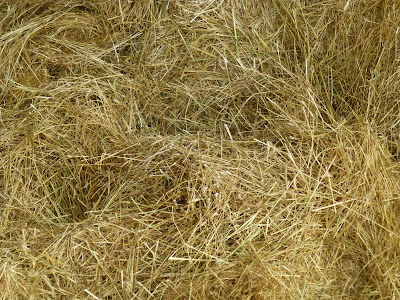 The chickens wasted no time in exploring. 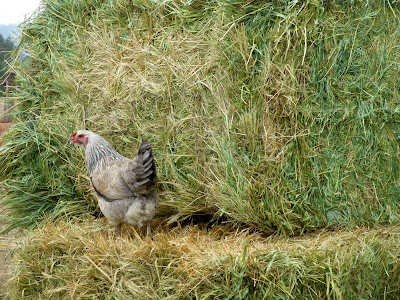 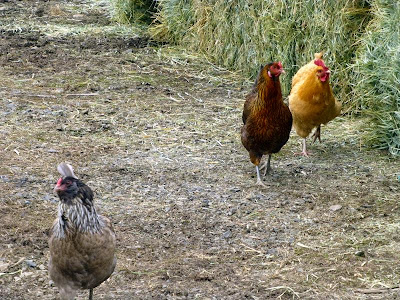 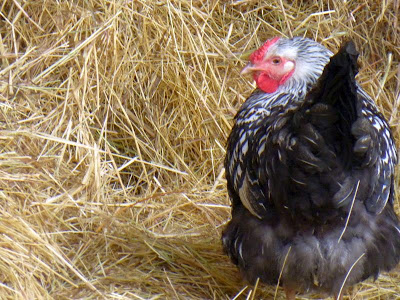 And Shadow wasted no time in munching. 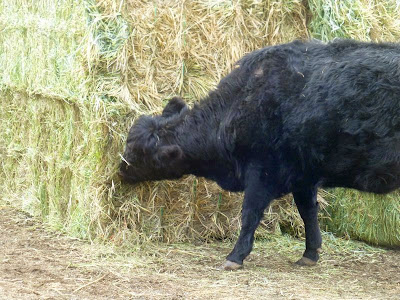 The bales were huge -- on average about 1100 lbs each -- and lay like gigantic play blocks. The nooks and crannies proved irresistible to both chickens... 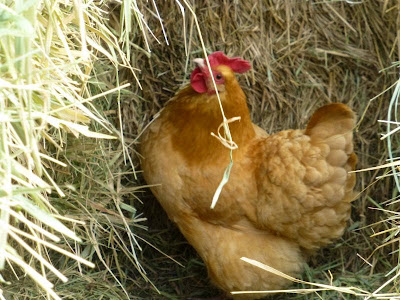 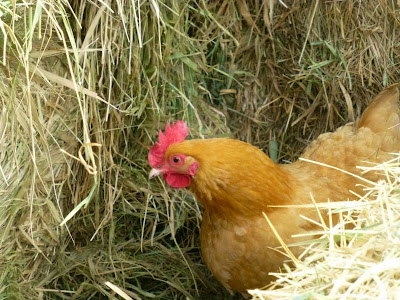 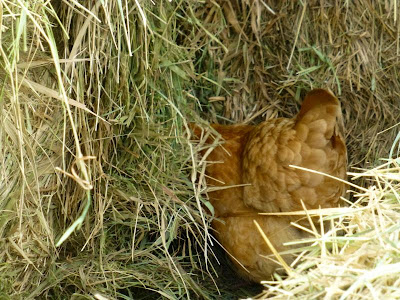 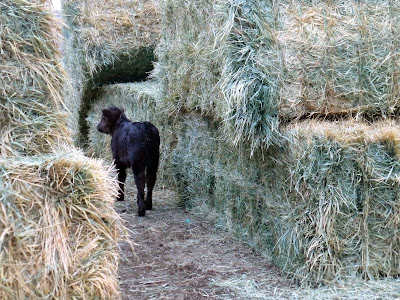 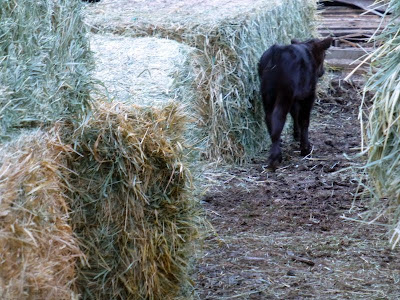 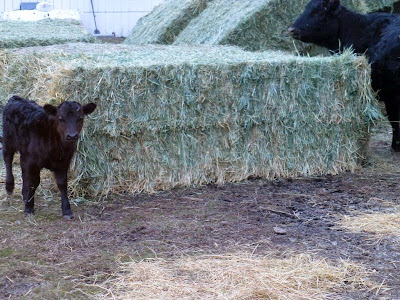 Don tried to load those massive bales into the barn, but they proved too heavy for our tractor. A neighbor (with a beefier tractor) is coming over the weekend to move them for us.

Now we're set for hay until summer!
Posted by Patrice Lewis at 6:04 PM