Here's a fascinating article I stumbled upon regarding the nightmare of high-tech farm equipment.

I know it comes as a shock to some people, but most farmers no longer use a horse-drawn plow. 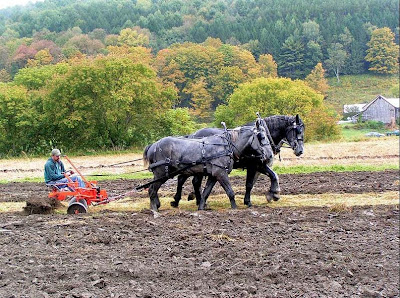 Let's face it, these time-tested methods might work to support a family farm, but it is literally impossible to support American agriculture with old methods.

So many professional farmers have gone high-tech. In fact, the technology (and price) of new professional-grade tractors is staggering beyond belief. 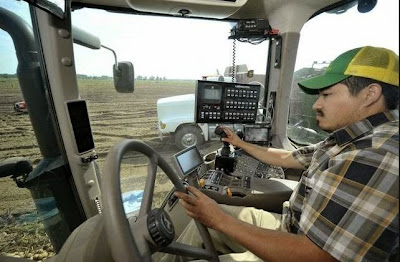 Some of these specialized machines can cost upward of a million dollars.

But when is technology TOO much?

The article discusses how computerized malfunctions in these technological marvels can strand a farmer for days during the critical window of plowing, seeding, fertilizing, or harvesting.

The article states, "[The farmer] just wanted a better way to fix a minor hydraulic sensor. Every time the sensor blew, the onboard computer would shut the tractor down. It takes a technician at least two days to order the part, get out to the farm, and swap out the sensor. So for two days, Dave’s tractor lies fallow. And so do his fields."

(Say what you will about a horse-drawn plow...)

"Of course, the world is changing, and that’s especially true in the world of agriculture," says the article. "Most mechanical problems can’t be solved with duct tape and baling wire anymore. Regulations are stricter, agribusiness is more consolidated, resources are more scarce, and equipment is infinitely more complicated and proprietary. Small family farmers like Dave face challenges that even the most industrious Maker would find hard to 'hack.'

"What used to be done by hand is now managed at scale by giant machine. And that equipment is expensive -- equivalent to the price of a small house (Dave’s mid-ranged tractor is worth over $100,000). New, elaborate computer systems afford the kind of precision and predictability that farmers 20 years ago couldn’t have even imagined. But they’ve also introduced new problems."

Let's face it, farmers need force multipliers. In the old days, horses, oxen, or other livestock provided that force. Today, those who are the hands-on agricultural producers are become more and more scarce, yet are called upon to feed greater and greater numbers of people. About 2% of Americans feed 98% of the populace. They simply can't do it with horse-and-plow any longer.

We live on the edge of the vast Palouse, a region of hills and swales that are heavily cultivated with a number of dryland crops (around here, mostly wheat). To drive through mile after mile after mile of these hills makes you realize how massive a job it is to cultivate it all. 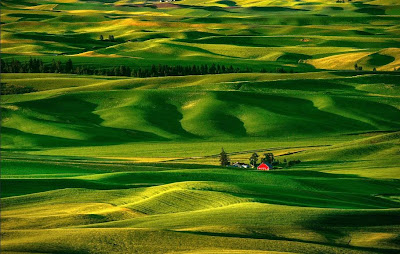 Tractors are no longer big mechanized horses. They're computer-programmed to the nth degree to guide the farmer toward precision adjustment of soil types, moisture, fertility, and endless other variables.

In theory this allows the farmer to save both time and money when it comes to applying seed, fertilizer, and pesticides. In reality, though, the farmer often goes into debt for a $100,000 machine that, when it malfunctions, is a $100,000 piece of useless junk until such time as an expert can be called to the scene to revive it. 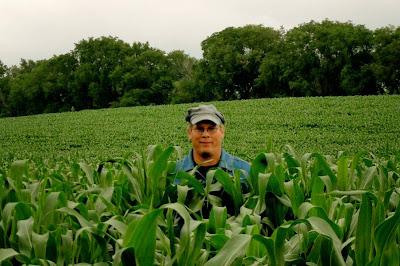 There are endless urban stereotypes of the dumb hick farmer, but I'm here to tell you most farmers are sharp, adaptable, creative, and resourceful. Most are also pretty decent mechanics. But they're not computer programmers, nor should they have to be. Their minds and attention should be focused on the proper cultivation, maintenance, and harvesting of crops -- not getting a degree in computer programming simply to run their tractor.

As the article notes, these kinds of tractors are increasingly a liability, not an asset. "There’s an increasing number of farmers placing greater value on acquiring older simpler machines that don’t require a computer to fix."

I'm the first to admit I'm a Luddite, but maybe it's time to tone down the high tech. Just because something CAN be "technologized" doesn't necessarily mean it SHOULD. Just sayin'.
Posted by Patrice Lewis at 5:11 PM