In defense of our tire garden

Even though it's the middle of winter and spring seems a long way away, I'm already planning the garden (in my head). I intend to expand it by putting in new tires for planting.

Along these lines, I thought I would show pix from a month ago, Dec 11, in which we had some tractor tires delivered, the last tires of the year. The fellow who delivered them said they were doing end-of-the-year cleanup of their facility. He called first and asked if we wanted the tires, and of course I said yes. 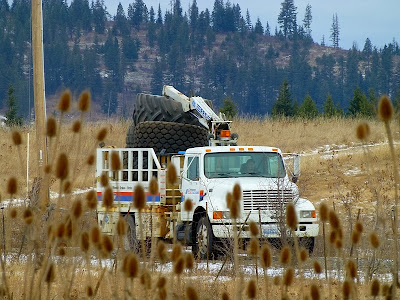 The question was where to put them until spring. We decided to split the load -- put some in the back of the barn, where we already have a bunch of tires stacked up, and put others in the clearing by the house. These tires are all piled up, waiting for appropriate weather when we can finish putting tarps and gravel on the garden, split these babies in half, and fill them with dirt/compost/sand and plant. 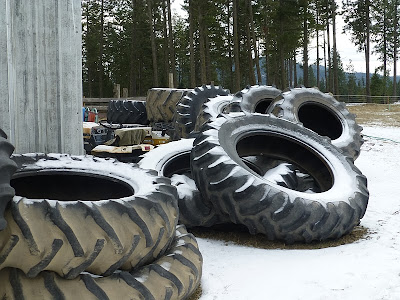 So the fellow pulled his rig behind the barn and got ready to unload. 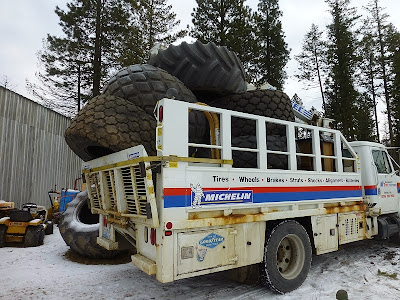 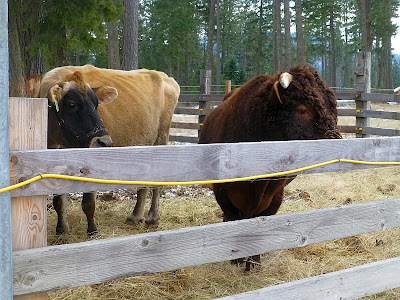 So did a neighbor's horse. 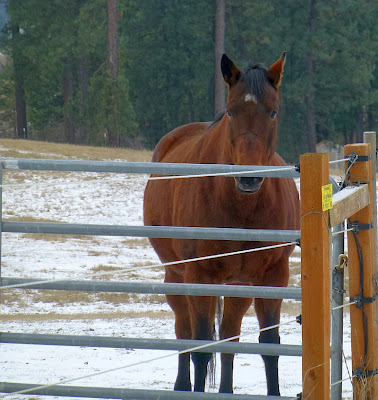 He unloaded about half the tires behind the barn. 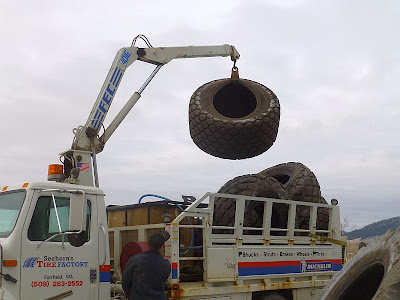 Then he moved his rig and unloaded the rest of the tires by the house. 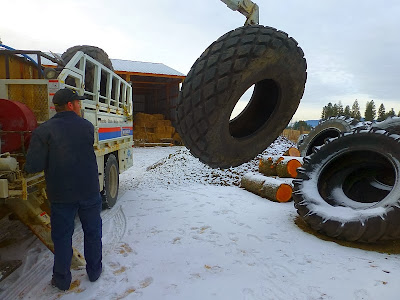 I asked him how much these tires cost to replace on a tractor. These particular ones, on an average tractor, cost around $14,000 (for all the tires, not just one). 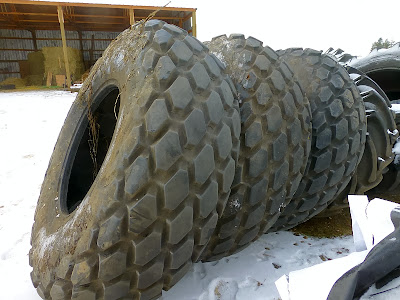 "That's on a million-dollar tractor, right?" I asked.

"No, that's on a $35,000 tractor," he replied. Then he told me something interesting. He said the cost of tractors is going down, but the cost of tractor tires is going up. So often farmers have to make a calculated decision about cost/benefit, and often end up buying a new tractor. For that they get a new set of tires as well. They sell their old tractor to offset the cost, and amortize the difference over the next five years or so. Such is the cycle.

Now I want to address another topic based on a comment I recently got on my first post about tire gardening. Someone wrote as follows:

You have made a terrible mistake, the role of all gardeners is to create a better world - even if its "Back in your own backyard". When the novelty wears off getting rid of these tyres will place an enormous strain on you, and your family. You could have created a floral landscape, a Dutch Masterpiece, an English Rose Garden, a French Formal Garden, and you chose Fords-Ville, Michelin Man, and polluted Mother Earth. Scrap timber is everywhere, so are bricks, tiles, even rockery stones, but tyres no. Are you sure the food grown will be free of carbon rubber tyre oil moisture? A carcinogen?

I would like to address these issues in order.

1. Please review why we're gardening with tires. For nine years -- NINE YEARS -- I fought our heavy clay weed-infested soil and got nowhere. We are striving toward food self-sufficiency on our farm, and clearly a garden is a critical part of that goal. In the end, raised beds were the answer. Tires are nothing more than raised beds. By growing food, we ARE creating a better world since it means we get homegrown organic produce.

2. Tires aren't a novelty. They've been around about a hundred years or so. They're ugly, they're ratty, and they're hard to recycle. What we've done is taken hundreds of tires, kept them out of the landfill, and turned them into something useful -- namely, food-producing units. There's a certain beauty in that.

3. Sure, we could have created a floral landscape, an English rose garden, a French formal garden, or some other useless water-eating bit of nonsense. But here's an inescapable truth: YOU CAN'T EAT ROSES. Besides, if I couldn't grow broccoli or corn in this suboptimal soil we have, I sure as heck wouldn't be able to grow roses.

4. We're not polluting Mother Earth. In fact, it might be argued that we're reducing the pollution on Mother Earth. We did not commission the manufacture of hundreds of old tires. Instead, to repeat, we kept them out of the landfill and turned them into something useful.

5. Scrap timber is everywhere, so are bricks, tiles, even rockery stones. Um, where? We live in a wildly rural area. We're an hour's drive from the nearest city. Would you rather have us driving hours and hours and hours in order to fetch home a few bricks and stones? Which is more ecologically reasonable? To take and use something that would be scrapped? Or to burn gasoline on endless trips to try and find building materials that meet your personal requirements? Tires are free and available everywhere. In fact, as the above photos show, we can even have them delivered right to our doorstep.

6. Food grown in tires will not be contaminated or carcinogenic. Of all the concerns, this is the only one I feel deserves a thoughtful reply.

Tires have a lot of nasty things bonded into them, things that arguably ARE carcinogenic. But it's the term BONDED that must be considered. Intact tires are distressingly inert (that's why they're everywhere rather than quietly decomposing into Mother Earth).

So where did this notion that tires will poison any food plants grown in them? I did a little internet research and came across a website called TireCrafting. This site answered questions so much better than I could that I wrote and asked permission to reprint a portion here.

There are organic puritans still quoting an international environmental magazine, Organic Gardening, Jul-Aug 1997, article headline “TIRES ARE TOXIC" "WARNING: Using old automobile tires around your plants (in any form) is hazardous to the health of those plants!" It then went on to justify the article from two sources, USDA researcher and compost expert Rufus L. Chaney, Ph.D., claiming that zinc released from tires is toxic to plants, and “A recent study in Australia claiming tires are toxic to petunias & impatiens.”

Mr. Farber contacted Dr. Chaney soon after the article appeared. Dr. Chaney told him that this magazine miss-quoted him. He said that he knows of only one toxin in the rubber of a tire in its solid state, and that is zinc. Zinc leached from burned tires, ground-up tires and the tire dust washed and blown from highways is toxic to some plants and many aquatic plants and animals in acidic soil and water (pH 6 or below). He said humans require zinc, and zinc is used in fertilizers to neutralize alkaline soils. He also said that zinc will not escape from a solid tire, but when a tire is left out in the whether for a few decades (30 years or more) it might decay and release its zinc.

Mr. Farber tried but could not locate the "recent study in Australia" but from his test gardens, he has photo proof of petunias and impatiens vigorously overflowing the same ten tire planters and in the same soil (adding only yearly loss) every year for more than thirty years.

Consider this: From the 2007 U.S. Geological Survey, "each year, approximately one million tons of tire rubber dust is washed and blown from our highways." This must integrate with our water, soil and air. No doubt, a substantial amount of tire dust is accumulating in everyone's "organic garden".

Mr. Farber is aware of another scary article. “Toxic Components Leaching from Tire Rubber" is the headline to a six page research study including text, charts and graphs proving their points, published on line, 3 May 2007 by Springer Science + Business Media, University of Goteborg, Sweden. It had nothing to do with gardening in tires. It was about zinc from tire dust killing bugs that fish feed on. Their conclusions were the same as Dr. Chaney's. Solid tires do not leach zinc.

If anyone has documented proof that shows a danger of toxicity from solid tires, Mr. Farber would like to be contacted with that information. Mr. Farber has been using tires for a container for his vegetables for over 30 years. If there is legitimate evidence that this practice is harmful he would want to know for his own health as well as for those who have planted their vegetables in recycled tires at his recommendation. You may contact Mr. Farber at retiring@tirecrafting.com.

Tires are made from petroleum which is toxic, therefore tires are toxic! How can you justify gardening in them?!

Everything in life is a potential hazard. The trick is to research beyond headlines and weigh benefits against risks.

When tires are burned, otherwise harmless chemicals mix and change form to create compounds which are harmful. It is now proven that the release of excessive amounts of hydrocarbons from fossil fuels is contributing to a myriad adverse effects to the environment and public health. Products from crude-oil are at the top of that list. No other country is more at fault than the U.S. with transportation in the forefront. Commerce is moving goods across our nation one semi tractor trailer at a time, each requiring its own hydrocarbon spewing power plant. Private transportation fares no better. Added to this are the hydrocarbons released in the manufacture of fuel, tires, and asphalt highways. There are solutions to these problems and we must fight for them. But that is not the issue here.

Used tires already exist and in their solid state they are as safe or safer than any other construction material. The process and the result of this global discard nightmare being recycled by industry, whether grinding them up for road base, burning them as fuel, or recouping the oil, releases more hydrocarbons while costing the global economy billions of dollars for tire cleanup and commercial recycling. Modifying tires to create green space and home gardening available to everyone would not only absorbs hydrocarbons, it could well be the key to salvation for practically every family on the planet that is otherwise excluded from adequate sustenance. Personal tire recycling potential benefits far outweigh all perceived hazards. A portion of tire taxes for tire disposal, ought to be channeled in this direction.

___________________________
Based on this information, I have no problem either continuing to garden in tires, or advising people that tire gardening is a safe and viable alternative to fighting stubborn and unresponsive soil. And I thank Mr. Farber of the TireCrafting website for doing the research AND for allowing me to reprint his material.
Posted by Patrice Lewis at 2:52 PM