Here's an article I came across awhile ago, the title of which riveted me: Heating People, Not Places.

The article says, "These days, we provide thermal comfort in winter by heating the entire volume of air in a room or building. In earlier times, our forebear's concept of heating was more localized: heating people, not places." 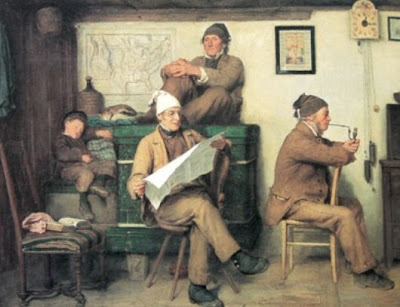 This, in a nutshell, summarizes what I've always loved about our woodstove: it's a point source for heat. When winter comes and the house is chilly, we stand by the woodstove until we're warm and then can go about our tasks.

Because of the advent of central heating, it became popular to heat rooms, not people. People spent more and more money attempting to keep an entire house to a single comfortable temperature. If you were chilly despite all that warm air, you had no option but to raise the thermometer or don extra clothes... and often then, you were still chilly.

I remember during my childhood, my parent's house had central heating. Most modern homes did (and still do). During the oil embargo of the 1970s, heating bills hit my parents hard. In an attempt to save money, they began using the fireplace more often. Everyone knows how inefficient fireplaces are, but it did provide one benefit: if someone was cold, they could sit on the hearth or prop up their feet or hold out their hands... and they got warmer.

In other words, it was a point-source for heat. It was heating people, not places.

Nowadays, without central heating, there are parts of our house that get or stay chilly during the winter. Yet we can't complain we're cold, because whenever we want, we can go stand by the stove and warm up. Even in the summer or other time the stove isn't lit, we will sometimes unthinkingly stand in front of it while conversing with someone, just out of habit. 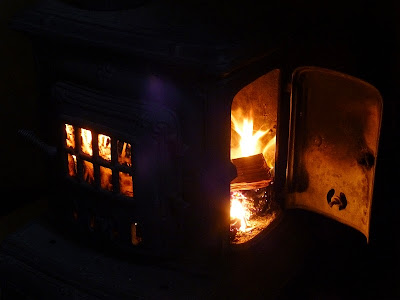 One time I was explaining the benefits of a woodstove to a friend who has central heating. I said the stove didn't heat the entire house uniformly, but instead acted as a point source for heat. She looked at me, entirely puzzled. "But that would mean you'd have to go stand next to it to get warm," she observed.

"Yes. And then when you're warm, you go about your business until you need to get warm again."

I thought it was an advantage, but she didn't see it that way, and we each concluded the heating system of the other person was inefficient.

I believe I stay warmer during the winter now, with our humble woodstove, than I did when I was a kid, with central heating. Or maybe it's my imagination. 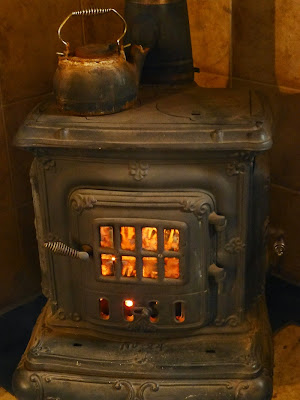 Either way, I prefer to heat people, not places. As we get our wood cookstove installed (which will be far more centrally located than our current woodstove), we may even be able to heat places a little bit too.
Posted by Patrice Lewis at 6:23 PM

Email ThisBlogThis!Share to TwitterShare to FacebookShare to Pinterest
Labels: woodstove