The world is getting creepier and creepier.

Here's a new version of Barbie that interacts with children. "The tech-enhanced version of the classic toy will be equipped with a microphone so that it can pick up the audio from what kids are saying. The words will then be transmitted back to a cloud server where the speech will be recorded and processed so Barbie can respond." 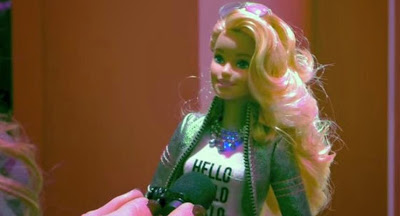 So let me get this straight. Parents are introducing a doll into their home that records conversations. These conversations are then transmitted to a cloud server and the recorded speech is then "processed" so Barbie can respond.

It goes without saying these recordings won't be limited to childish prattle. And how will Barbie respond if the recorded conversation involves, say, personal financial matters? Relationship issues within the family? (After all, who knows what Barbie considers child abuse.) What about political conversations? Parental arguments? Parental intimacy, for that matter?

And what happens when Mattel's archived conversations are subpoenaed by the courts for whatever might have been said in the privacy of one's own home?

As one commenter put it: "Introducing the new... NSA Barbie!!! Tell her your family’s deepest and darkest secrets to Barbie and she will listen... 'Does your daddy own guns? Do your parents vote republican? Do they eat meat or hunt?'"

Another commenter referred to this as Rat Fink Barbie, which is vastly more apt.

The scope of potential abuse of this new toy boggles the mind. Only a stupid fool would have one of these dolls in their homes.
Posted by Patrice Lewis at 5:18 AM

Email ThisBlogThis!Share to TwitterShare to FacebookShare to Pinterest
Labels: technology