On Tuesday we took possession of something very large and heavy... my early Christmas present!

This was not a spontaneous purchase. It required much thought as well as saving up the money for its purchase. However a cookstove is, we feel, a critical part of a self-sufficient household. 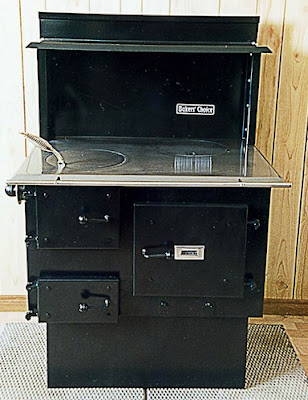 Right now the only source of heat in our house is our beloved antique parlor stove. It does a wonderful job heating; however it's located in one corner a distance away from the rest of the house. 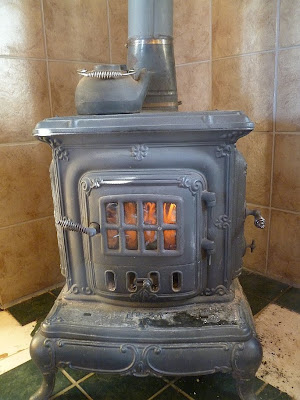 We cluster around it during cold weather, of course; but it also means the other side of the house can be quite chilly during a cold snap. 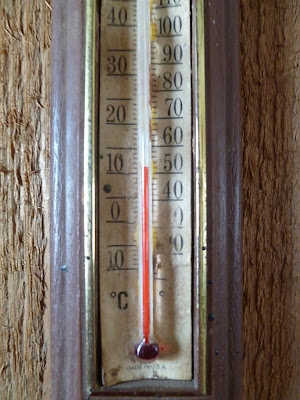 We had purchased an antique wood cookstove a few years ago, a lovely little piece in excellent condition. Unfortunately it was missing several critical parts, parts we would need to get custom-manufactured before it could be used. A new cookstove has been at the backs of our minds ever since. 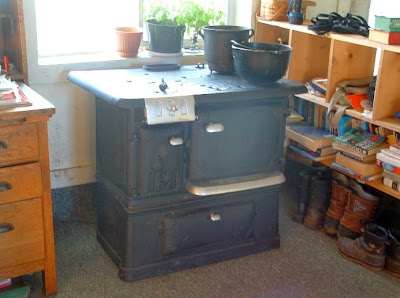 Consider this passage from the book Better Off by Eric Brende: "I noticed in nearly every local kitchen a big black, shiny cookstove with a little insignia on the front bearing the words 'Pioneer Maid.' It was an invention of two Amish brothers from Canada, and it was more than an ordinary stove. It was the first-ever application of the principle of airtight combustion to wood-fired cooking. This made it the only notable advance in wood cookstoves in at least one hundred years, probably since the introduction of cast iron. Besides being efficient, the stove was versatile It could cook, bake, maintain a hot water supply, dry vegetables, and heat 2,000 square feet of living space all at the same time. For the local housewife, it was an all-purpose appliance that met most of her heating needs at the touch of her fingertips."

I think it was this passage, more than anything, that made us realize an antique cookstove -- however beautiful -- would never be as efficient as a modern air-tight version.

When we ordered the stove and placed our deposit, we were told there was a backlog and a waiting period (they're very popular stoves!), and couldn't expect delivery until late December or early January at the earliest. So imagine our surprise and delight when, last week, we received a phone call that the stove was on its way!

Tuesday morning the freight delivery driver called for specific directions to our house. I went to the end of our driveway and peered down the road, anxiously awaiting his arrival. 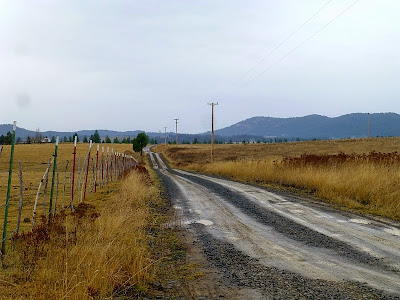 At last the truck hove into view. The driver later told us he had some scary moments since his truck was sliding badly on the mud coming up the hill. 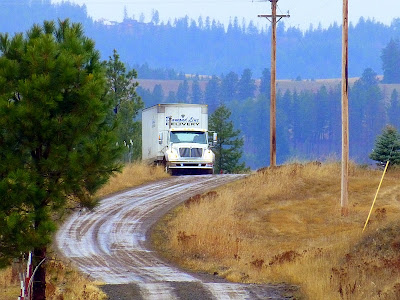 We were under strict instructions from Obadiah's to inspect and photograph the stove before offloading it, with the right to refuse shipment if it was damaged (by, say, a forklift tine puncturing the side). The driver (a cheerful bespectacled fellow) had delivered these stoves before and knew the routine, so he joined in the inspection. 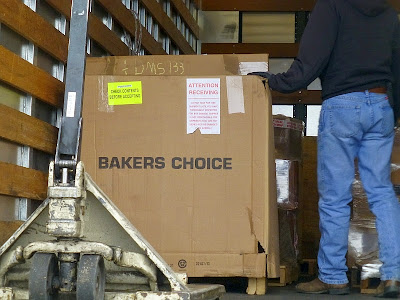 We noted some damage to the box... 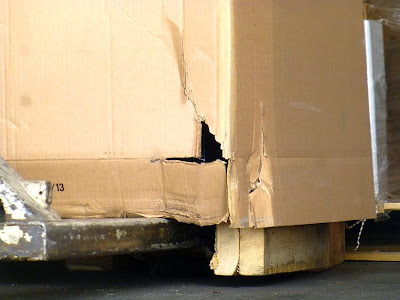 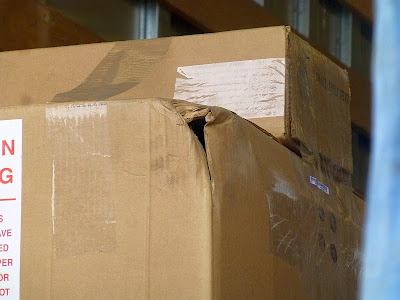 ...so we lifted the box off and looked at the stove itself. 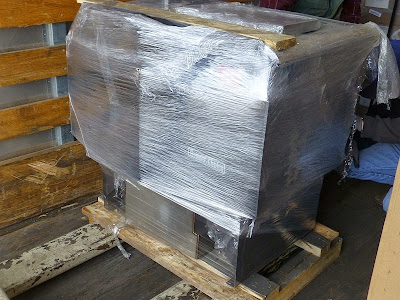 We examined it from all sides, and it was in pristine condition. 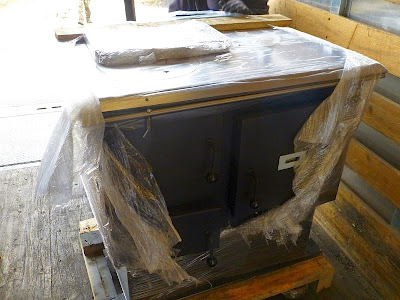 So we reboxed it and the driver pulled it onto the lift gate. 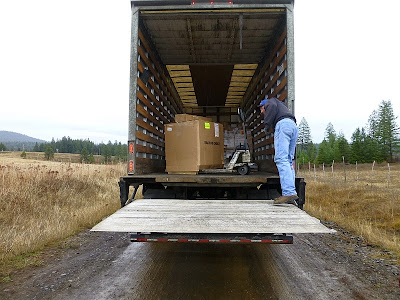 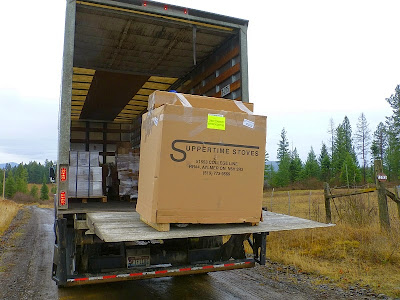 Then, using a neighbor's tractor with a forklift attachment, Don carefully slid the tines under the box... 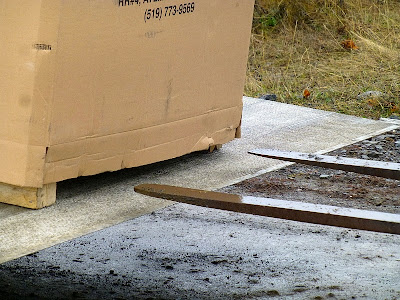 ...and lifted up the stove. (By the way, the neighbor who owns the tractor was with us, watching. He described me as "giddy," which was dead-on accurate.) 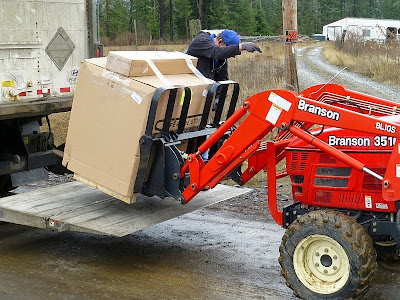 We wished the truck driver a Merry Christmas, then Don transported the stove toward the house. 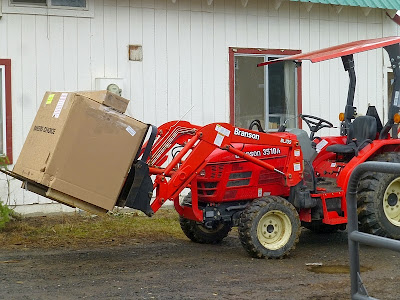 We parked it in the barn for the time being. 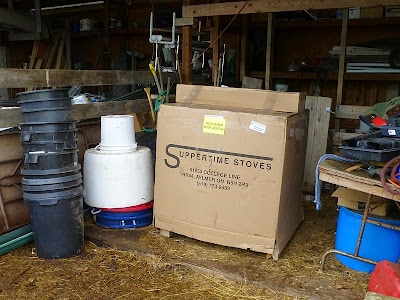 In part because it was delivered early, we're not ready to install the stove in the house just yet. Thankfully we already have a stove pipe extending upward through the roof (remnant of an earlier stove installation from our house's previous owners), so we have no other option where to place the stove. 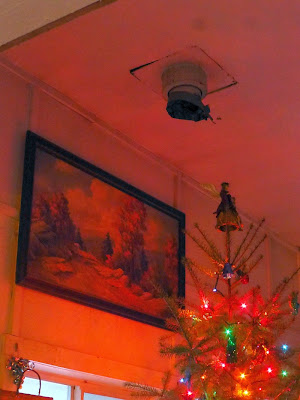 Once Christmas is over and we remove the tree, we'll move the hoosier hutch to a different spot and install the stove in the hoosier's place (we can't put the stove directly in front of the window, of course). We'll have to construct a fireproof pad and backing as well as get the necessary piping to connect with the ceiling pipe. 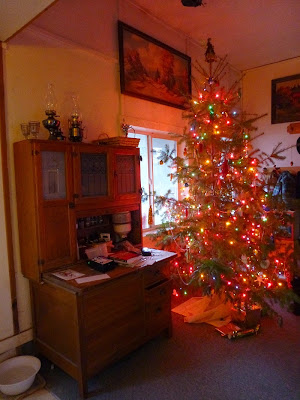 So for the time being, we wait. But our neighbor is right: I'm giddy with anticipation and can't wait to learn the art of cooking on a woodstove. 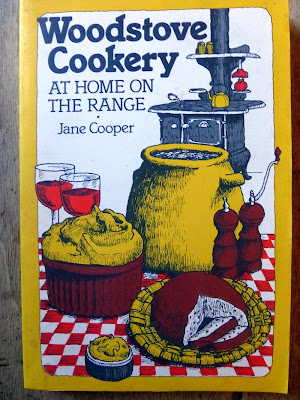 Thank you to my darling husband for my Christmas present!
Posted by Patrice Lewis at 8:53 AM