It was time to move the cattle from the wooded side of the property (their winter quarters, since they have access to the barn awning for shelter and feeding) to the pasture side, which is now lush with grass.

But we had a few adjustments to make first. Our remaining herd matron, Jet, and her calf Tarter, had been in with Samson, our bull, all winter. The reason for this is because Tarter is a steer and thus wouldn't tempt Samson's hormones (putting a young heifer in with Samson for the winter would guarantee a much-too-early teenage pregnancy).

The question was, who would be Samson's new pen-mate? We decided upon Shadow.

Shadow, if you recall, was the cow who lost her calf a year ago. We thought she was bred and due a few weeks ago, so we separated her and tucked her in the barn; but nothing happened, so apparently she wasn't pregnant and we let her rejoin the herd.

So it looks like Shadow may be barren. The question is, is it worth keeping a barren cow around?

Actually, yes. Samson will always require a pen-mate, and if it's the wrong time of year to breed a cow (if we don't want a calf born in the middle of winter), then Shadow's usefulness can be in keeping Samson company until we want another cow bred.

So we had to let Jet out of the bull pen, and put Shadow in. The question was, which one is Shadow? She has a virtual twin (Sparky) and it's almost impossible to tell these ladies apart.

So one day I happened to notice a bunch of critters relaxing in the corral, including Shadow and Sparky. And I actually had a smart idea (a rarity). 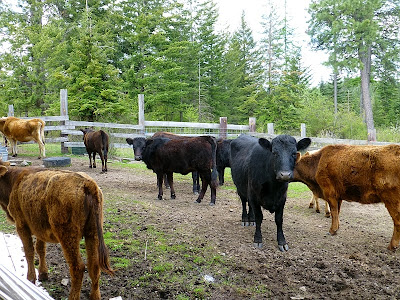 The animals were quiet and calm, so I grabbed a can of spray paint and sprayed one of the cows' rumps. I didn't care which one -- I'd figure that out later -- but meanwhile at least one of the "twins" was marked. (Dark blue spray paint wasn't the greatest color to use on a black cow, but it was all we had.) 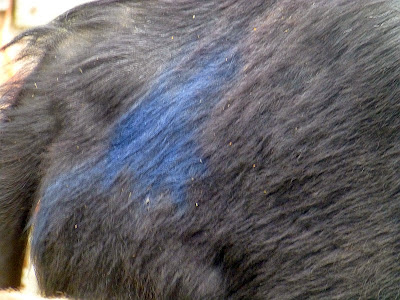 The marked animal turned out to be Shadow, barely distinguishable from Sparky because of a few white hairs scattered on her nose.

So we scooted Jet and Tarter out of the bull pen, and pushed Shadow in. Here Samson investigates the relevant end. 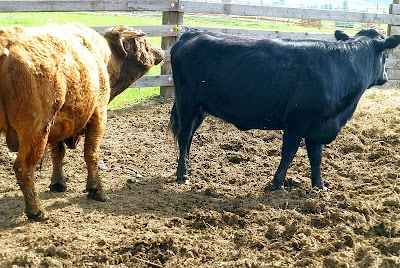 However, with Jet and Tarter now rejoining the herd, we didn't push the animals down into the pasture for a couple of days. The reason is, we wanted Jet to get a chance to readjust from dry grass hay to fresh green grass. We've been tossing small amount of lawn clippings into the bull pen to get her system primed, but if we overwhelmed her with too much green grass all at once, she'd bloat.

Fortunately (or unfortunately), the wooded side of the pasture was pretty much eaten down. This was good for Jet and Tarter. They got some greenery, but not too much at once. (We were still "token" feeding the animals grass hay morning and evening to supplement their grazing.) 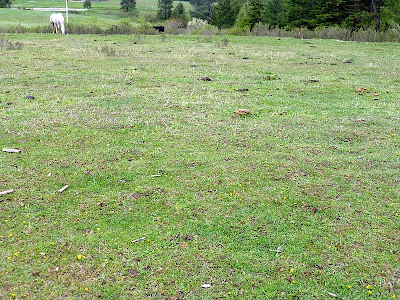 Now compare this to the lush grass in the pasture, and you'll understand why bloat is a possibility. 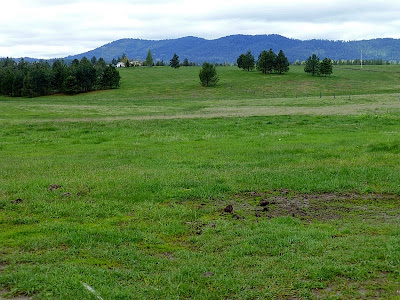 So Jet (with the horns) grazed with the herd on the eaten-down side of the property for two or three days. 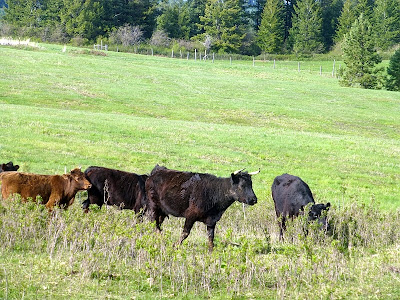 (Notice all the yearling calves sniffing at her.) 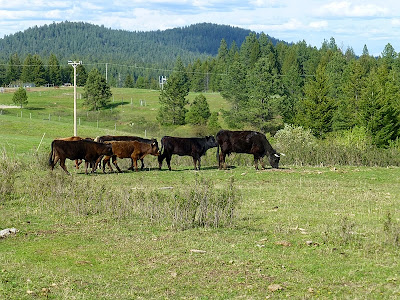 While Jet and Tarter were adjusting their digestion, Don did some work on the fence that divided the pasture in half. It had taken a beating over the years, and needed a tremendous amount of repair work. 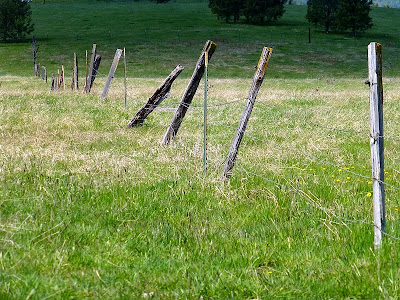 Our goal is to be able to rotate the cattle between two sides of the pasture and the woods (three locations total) throughout the summer, causing less stress on the pasture and providing better foraging for the beasties. 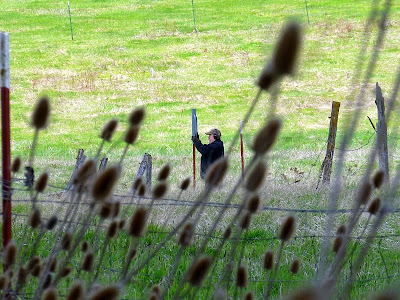 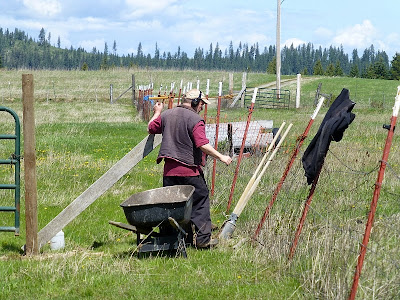 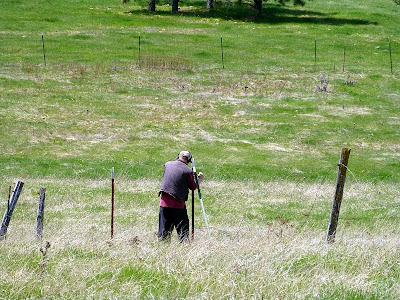 When a few days passed and neither Jet nor Tarter suffered any ill effects from fresh grazing, we decided it was Moving Day. First we tied a cattle panel (sometimes called a hog panel) on the back side of the bull pen. Until it dries out enough that we can scoop away a winter's worth of compacted hay and manure, the elevation on this side of the pen is high enough that the bull could easily jump with the right incentive. (And the right incentive would be seeing all his ladies heading away from his august presence.) 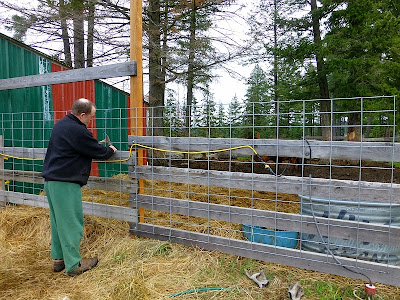 I walked down and closed the driveway gate (in case of wayward calves), then started calling "Bossy bossy bossy bossy BOSSY!" That's our universal cattle call, and everyone knows what it means. Immediately the animals began heading toward the feed lot. 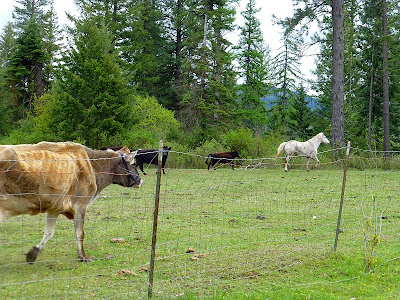 As they came in, Don opened the gate. 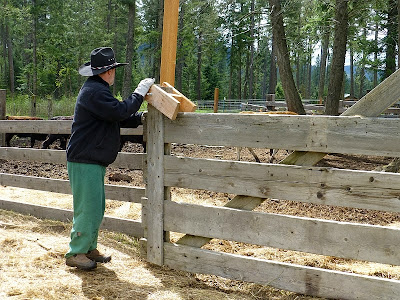 In no time flat, we had critters pouring through and high-tailing it around the back side of the barn where the pasture gate is located. They know the routine! 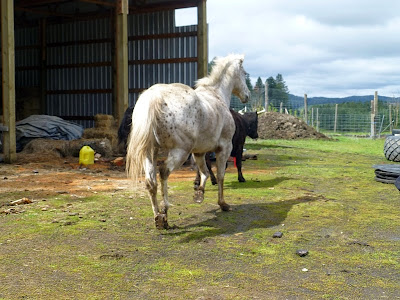 The animals literally kicked up their heels as they ran, they were so excited. 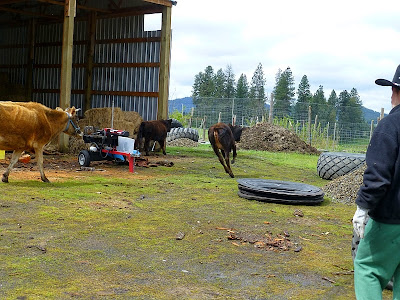 They took every opportunity to snatch mouthfuls of the tender grass as they went. 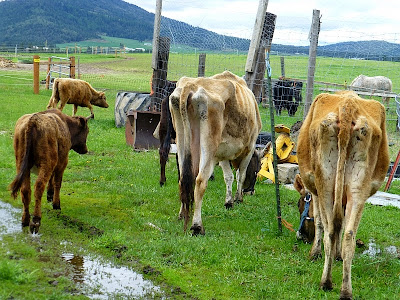 But soon enough we got them all shooed into the field, and closed the gate. 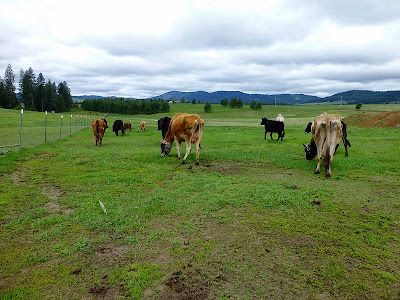 Samson, as you can imagine, was pretty unhappy to see his girls disappear. He was vocal about it for a few hours. 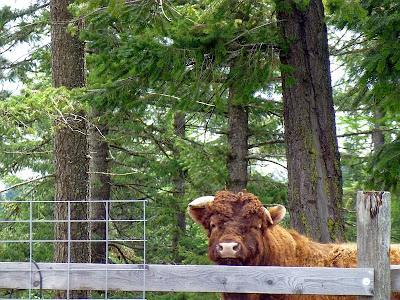 So was Shadow. But they settled down when they realized they could still see the other critters, since the water tank is close by. 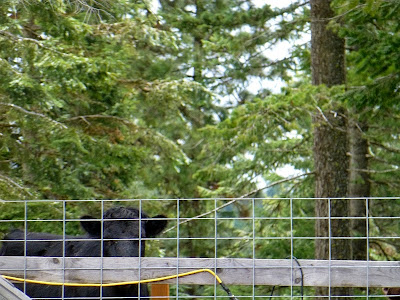 But our job wasn't quite finished yet. First we put a bloat block out in the field to prevent the cows (especially Jet and Tarter) from bloating up on too much greenery. (Bloat block is something like a bovine Pepto Bismol). 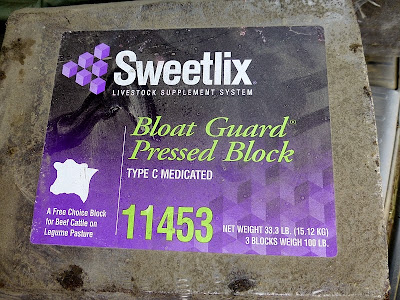 It's got molasses in it, so Jet went for it right away. (She's also had no bloating issues at all since being in the pasture.) 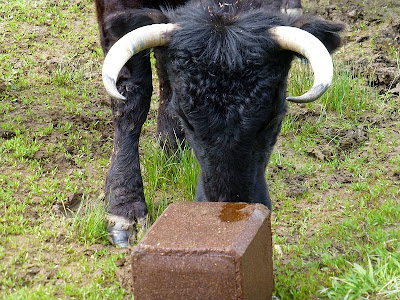 We also got a water tank moved and filled. 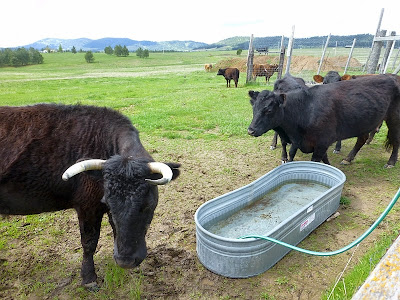 We've hardly heard a peep from the critters in the last three days. 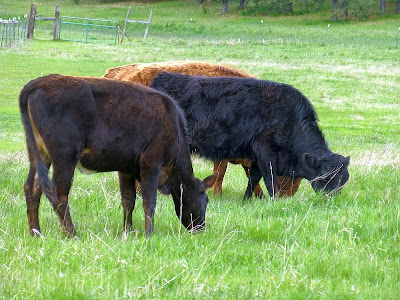 Here's Rosy and Dusty. They're almost identical in appearance except for color. Very cute. 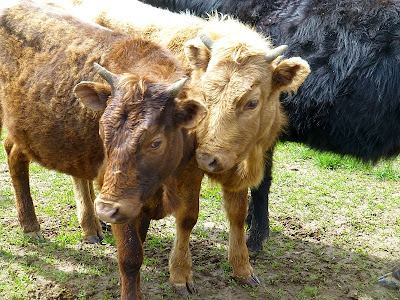 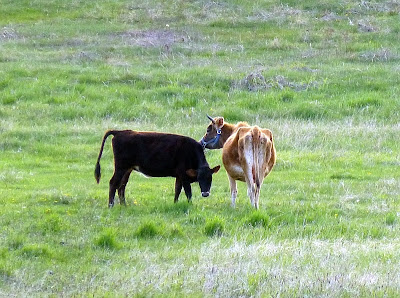 Yes, we have some happy cows. Must be spring. 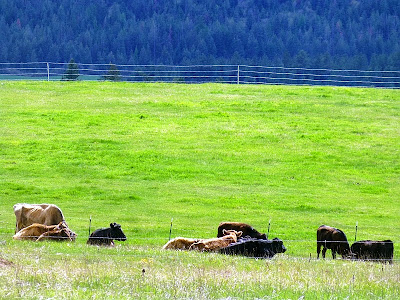 Posted by Patrice Lewis at 8:07 PM