I have a reader with a particular interest in the status of our pond since she's interested in getting a pond dug on her property as well. So, since it's been a loooong time since I've addressed the issue of our pond, I thought it was a good time for an update.

Here's the situation. We live on the prairie with no surface water nearby, except for the occasional stock pond on other nearby properties. We have no streams, creeks, or springs. Since our well is 630 feet deep, a hand pump is out of the question.

Our well water is superb and abundant (30 gallons per minute), but we are held hostage to electricity since our well pump is electric. When the power goes out, we lose water. If the power went out permanently, our well would be useless.

This was a dilemma we wrestled with for years. We looked into every possible option we could think of -- windmills, solar, you name it. What it all came down to in the end was money. All the viable options for pulling water from such a deep well costs far more than we had.

Part of the problem is we don't just need water for ourselves (cooking, drinking, bathing, etc.). We also need water for our livestock, and water for the garden. Therefore, if the well was unavailable for use, we needed a means of harvesting and storing rain water.

To this end, we purchased a 1500 gallon water storage tank. This is an above-ground tank which we'll hook up to roof runoff from our barn after we build a shed to house and insulate it. 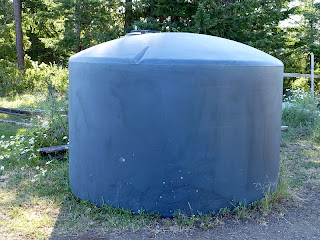 But while this much water would last (with care) for several months of household use, it wouldn't last long for watering a garden or watering livestock.

So after much discussion, we decided our most affordable option was to dig a pond.

Don's done a fair bit of geo-engineering in his time, so he did a careful study of our property to determine the best location for this pond. We needed it close enough to the house and garden to be easily accessible, but the primary determining factor was soil conditions. A hole in the ground won't hold water if the conditions are too porous. What we needed was a clay base.

Sadly, clay isn't hard to find on our land. That's one of the reasons my gardening attempts over these many years have been such resounding flops. Our clay soil, however, did have the redeeming factor that we could have the pond dug in the pasture immediately next to the garden for easy access to both watering plants and watering livestock.

So, on a momentous day in January 2012, a heavy-equipment operator came with his massive backhoe and broke ground. 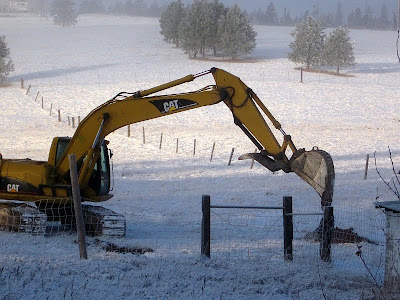 The result, as we fondly called it, was the Great Big Hole in the Ground. 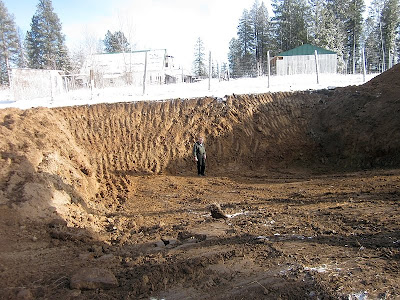 Now that we had the hole, we wondered how to fill it. We have a decent length of corrugated drain hose we could hook to eaves on the barn roof and use rainwater roof runoff to fill the pond. But we knew we wouldn't get around to installing eaves and pipes right away, so we were prepared to have that Great Big Hole in the Ground for quite some time.

But then a happy thing happened. We found we didn't need to hook up that drain hose after all. The pond filled all by itself, thanks to a nasty layer of hardpan we have about 18 inches below ground. (That's the whitish layer you see in the photo below.) 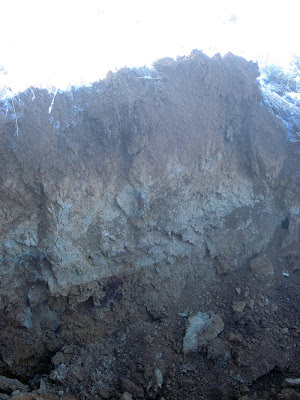 This hardpan layer has made me despair of ever successfully growing fruit trees (roots can't penetrate it) but it has the compensating virtue, we learned, of funneling rainwater straight into the pond. 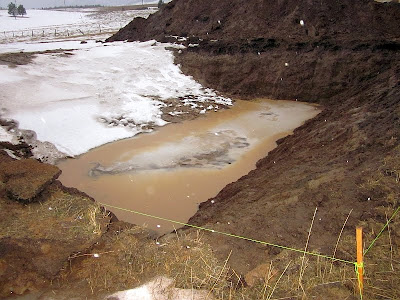 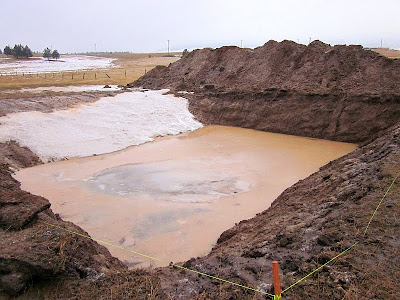 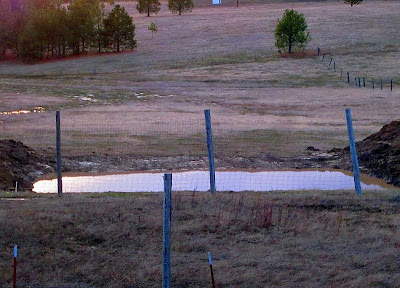 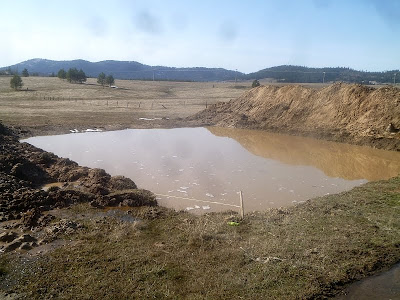 See? Effortless on our part! It helps that our property is just the tiniest bit sloped toward the pond.

That first year, we wondered how well the pond would hold up during the driest parts of summer. It's not unusual here to go three months without rain. Would the pond go empty?

The answer: no. It dropped about two feet in depth, but otherwise stayed full of water. Yippee!

Fast forward to yesterday. Here's some photo updates of our pond. 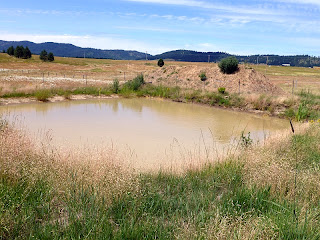 We have a few cattails growing along the edges. We're not necessarily encouraging their growth -- a neighbor has a stock pond so thoroughly overgrown with cattails that it's almost solid ground except in the very middle. We're gonna control these guys. 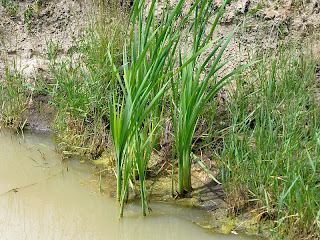 After a year and a half, the water is still cloudy due to all the clay silt in suspension. 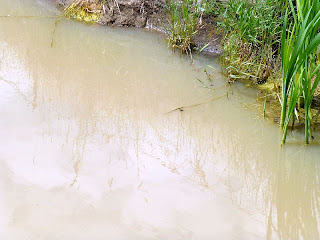 There's no doubt the pond has attracted wildlife. Here are a couple of beautiful dragonflies. 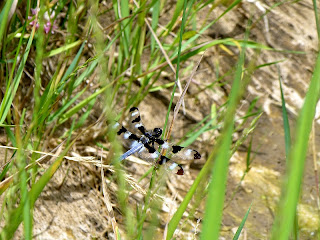 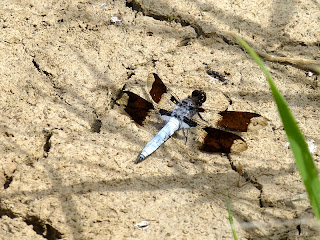 The west side of the pond is shallow and ramped. 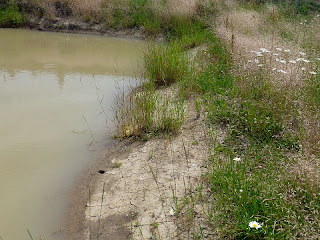 The east side is the deep end. 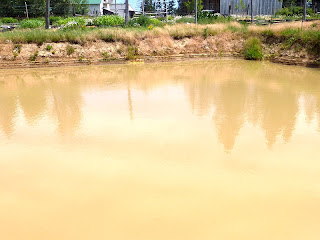 You can see the "dry lines" or high-water marks on the eastern edge. (This photo was taken yesterday, July 12. That's how much the water level has dropped so far this summer.) 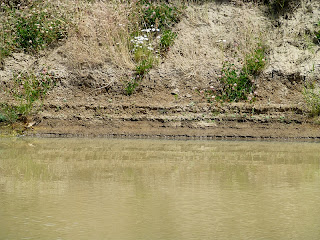 You can see how close the pond is to the garden. This way, if we ever have to hand-water the garden, the water source isn't too far away. 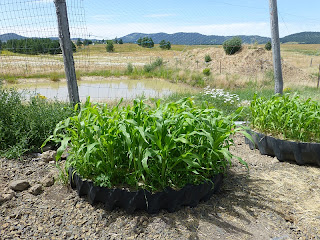 Last year when we put the cattle on the pasture, they were obsessed with wanting to get to the pond. Not because they were thirsty (their stock tank is always full) but because it's new and different. We didn't have a particular objection with them drinking from the pond, but the sides are very steep and it's dangerous for them to fall in because they'll always try to climb back out the way they came in, meaning up the steep side rather than swimming toward the sloped end. (Cattle aren't very bright.) Bottom line, they'll drown. So we put up a hasty fence to keep them out.

There's something about fences. The grass is always greener on the other side. 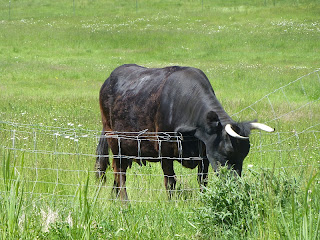 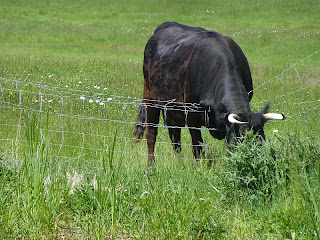 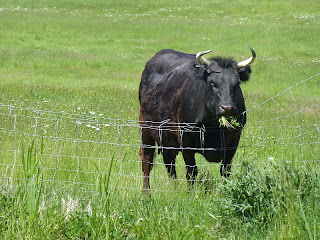 This fence was never meant to be permanent, and the cattle have inflicted their damage over the last year. We keep patching and re-patching. One of these days we'll install a more permanent fence, hopefully making the pond contiguous with the garden. 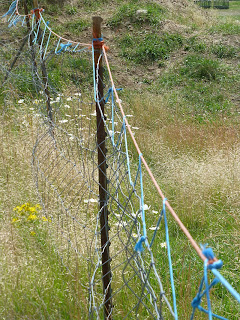 We also still have those two honkin' big piles of clay dirt on either side. Originally we knew someone who wanted to haul it away, but that hasn't happened yet, so there it sits. Some of it has sloughed back into the pond (contributing to why the pond is still cloudy) so this winter we're going to tarp the dirt piles with billboard tarps to lessen the runoff. 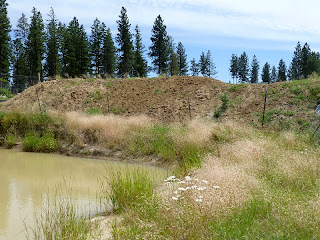 Our raw young stock pond may not be as picturesque as the older, more mature stock ponds may be... but we are very very glad to have this permanent source of water on our farm. 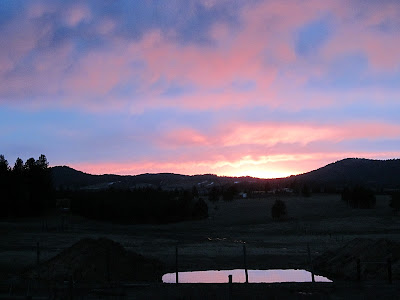 Email ThisBlogThis!Share to TwitterShare to FacebookShare to Pinterest
Labels: pond