I'm finished with the second day of sales, which started out slow and got busier toward the evening. I sold 24 pieces in all, a nice respectable amount. It's hard not to make contrasts with the insanely good sales of last year, but 24 pieces is nothing to sneeze at!

The last two sales of the evening -- made after the event was actually officially over -- were made to a Mexican gentleman with excellent English who came by. He was in Portland on business and was heading back to Mexico today, and wanted to bring his wife a present, so he purchased two tankards (one for himself, one for his wife). He was cultured and funny and charming, and I thought it was a nice end to a long day.

Here are some photographic highlights of Thursday. Before the day started, I took pix of this display board asking where people came from. 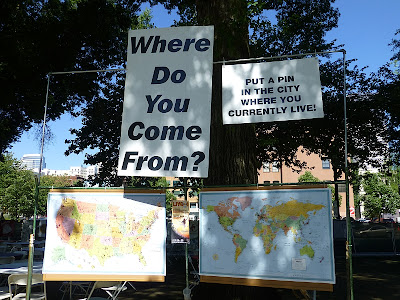 Understand all these pins were after only ONE day of attendance -- visitors literally from all over the world... 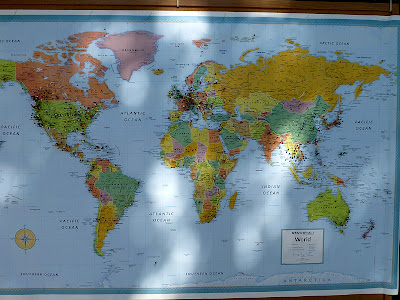 ...though I think we can comfortably assume this one was a joke. Coastal Greenland, maybe. But in the middle of the central glacier? Not likely. 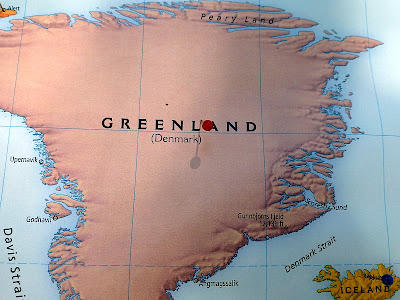 However there was a visitor from Iceland, which I thought was great. 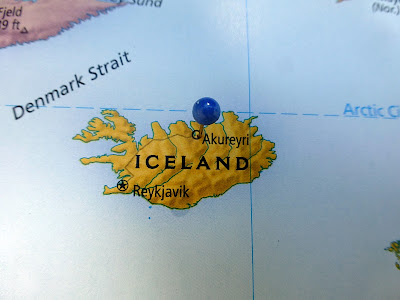 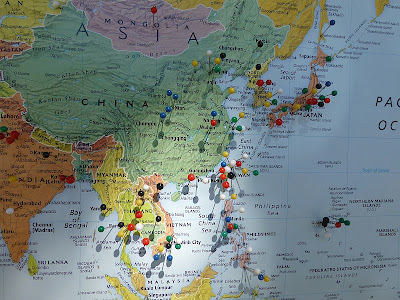 ...and even a few folks from Australia and New Zealand. 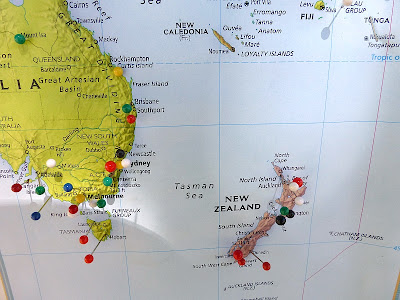 The Inland Northwest also had a respectable representation. 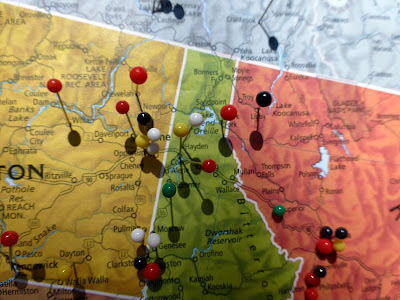 I think there were visitors from literally every state. 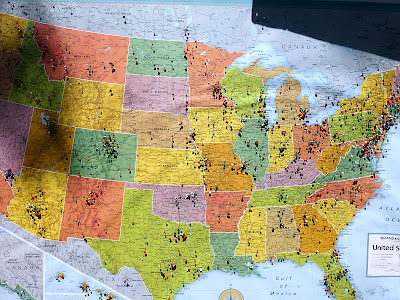 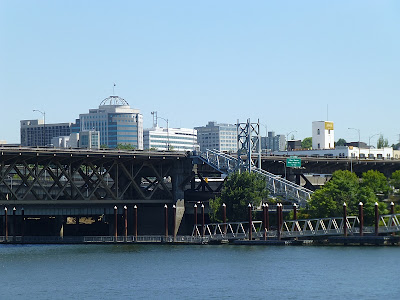 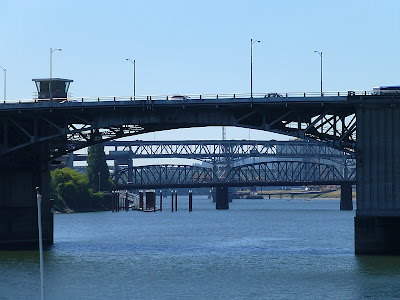 At noon when the first visitors were arriving, I noticed this woman carrying a bundle of Hula-Hoops, which she left near the stage. 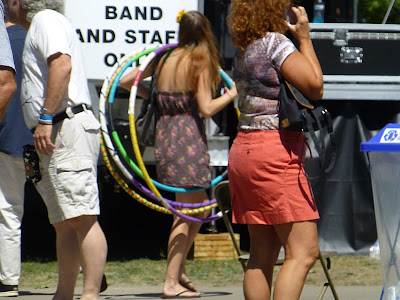 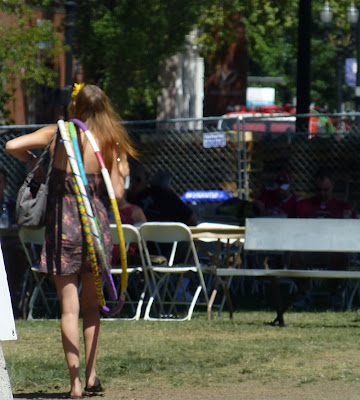 Throughout the day, anyone could take a Hula-Hoop if they felt like dancing with one, which I thought was kind of a neat touch. 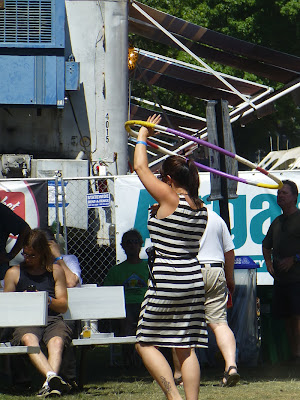 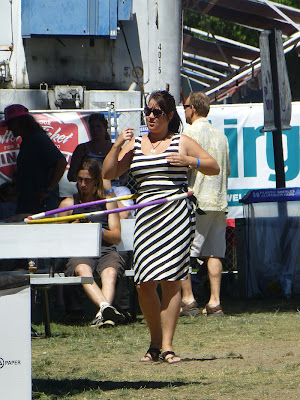 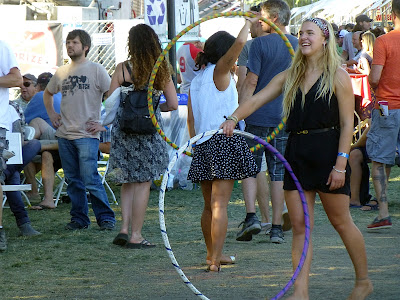 This was a cheery couple dressed like a monkey in a space suit (well why not?) and the Statue of Liberty. 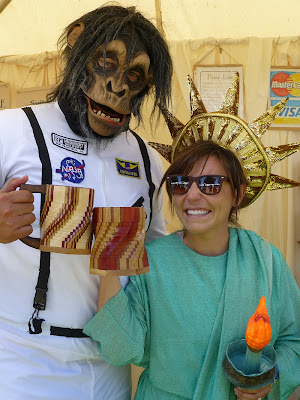 We saw this woman walk by with electric-blue hair. Was it a wig, or was it dyed? We couldn't tell. If it was a wig, it fit very well. If it was dyed... well, then they've made greater advances in hair dyes in the last few years than I thought. 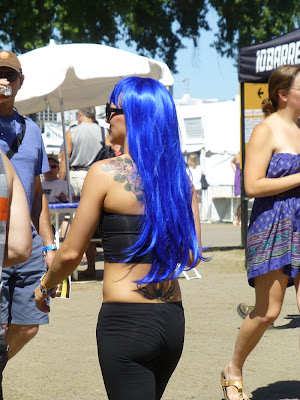 T-shirt du jour. There have been disappointingly few really funny T-shirts this time. 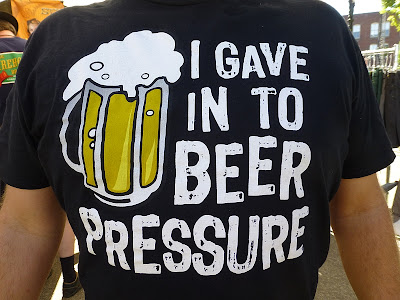 I heard a noise like wooden wind chimes, and when I looked up I saw a woman in a skirt lined with... beer bottle caps. It was surprisingly attractive, and let me say you always knew where she was. 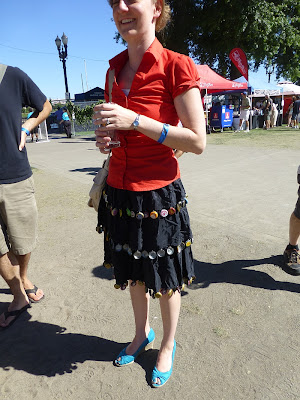 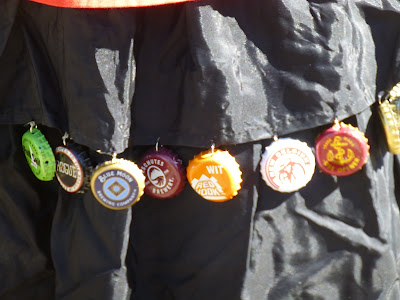 Two of Portland's Finest pose in the booth (for professional reasons, they couldn't pose with tankards). We spent a bit of time chatting about a police offer's life in a large city. I always find it fascinating to hear about law enforcement from the inside. 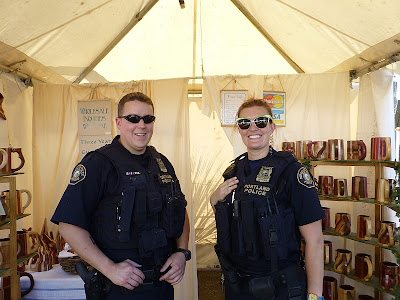 The last band of the evening was a rhythm & blues/reggae-style band. Or so I thought. The crowd in front of the stage was unusually packed, and when I went to see what the attraction was, I saw one man. As in, a one-man band. He was playing, for lack of better description, a homemade electric harp-like instrument. The supports had sound holes, there was a percussion arrangement at the base, and everything strapped to his body made sounds just like an entire band -- base guitar, drums, strings, guitar... He was phenomenal. 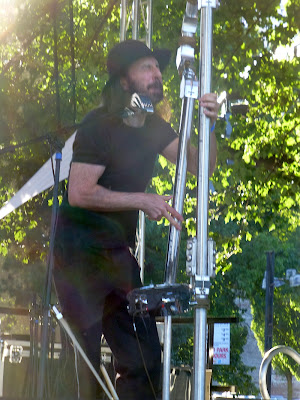 The musician's name is Mike Silverman, and he's known as That1Guy. I was so enthralled by his skills that I looked him up online. There are a couple of links here and here. 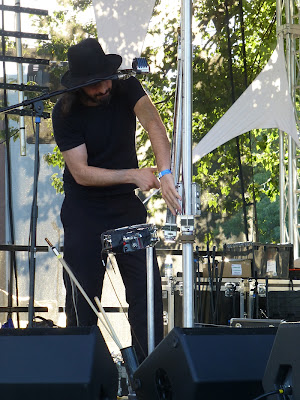 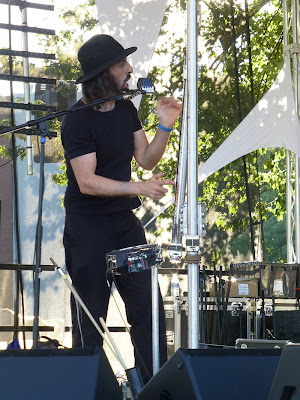 Late in the evening these two gentlemen wandered by in matching leiderhosen. Couldn't resist asking them for a photo. Unfortunately since it was dark out, they were only illuminated by the single overhead bulb, so it's not the best lighting. 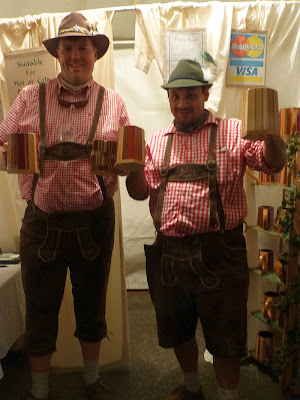 Tim and I were pretty darned exhausted by the time we packed down the booth for the evening. Three more days to go!
Posted by Patrice Lewis at 7:42 AM