Yes, it's past mid-June and we're still planting the garden. This weekend I finally got the corn planted.

Not the popcorn, mind you, but regular sweet corn (heirloom, of course). We decided to plant it in the corral behind the barn, which is deep soil full of composted manure since the animals spend a lot of time there in the winter. We can shut gates and keep the beasties out, and it has the added advantage of being virtually weed-free. 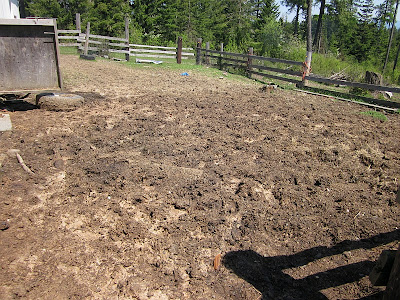 But first it had to be prepped. Back in mid-May, when we still had the loan of our friend's tractor, Don hooked up our subsoiler and did some deep digging in the corral to churn up the soil. 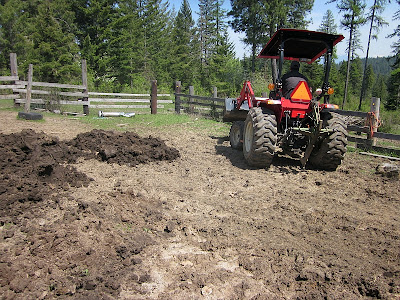 He also brought in extra buckets-ful of composted manure, to work into areas which were a little thin. 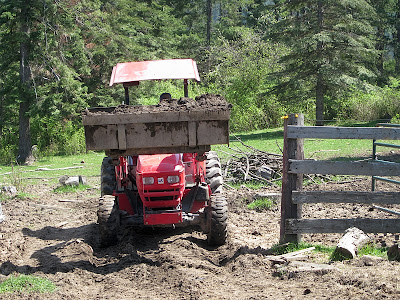 There were also a couple of old tree stumps he wanted to get rid of. We chained one of them up and dragged it out... 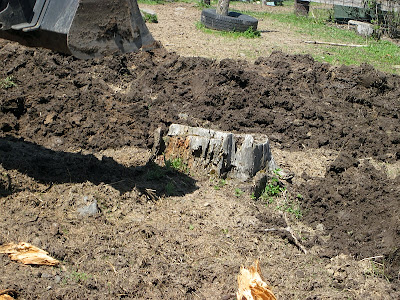 ...but the other was so rotten it fell apart, so we sort of bulldozed it out. 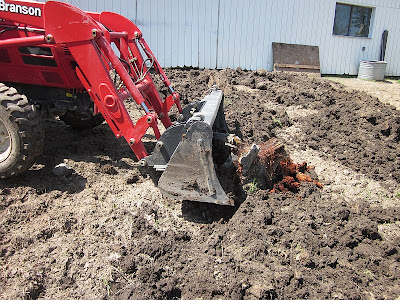 After he added a whole bunch of manure, we hooked up the cultivator and he tried to cultivate the corral. 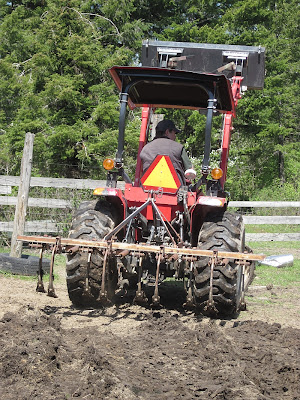 But it was still too wet from the spring rains... 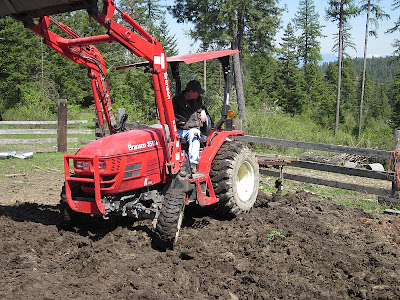 ...so we put the whole project on hold for a few weeks until things dried out. 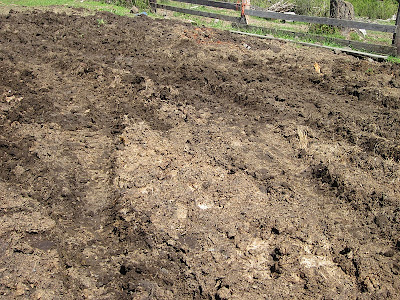 Fast-forward to this past weekend. The kids were with their grandparents in Coeur d'Alene, and Don was out of town at a selling even. With a few rare days at home alone, I decided to concentrate on planting corn and otherwise working on the tire garden.

I started by soaking the seed corn in water for a few hours, to speed up germination. 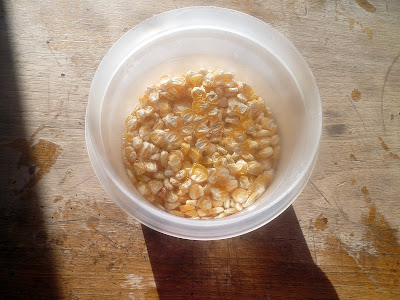 Suddenly the corral seemed like a huge space, faced with the possibility of planting it all by myself. 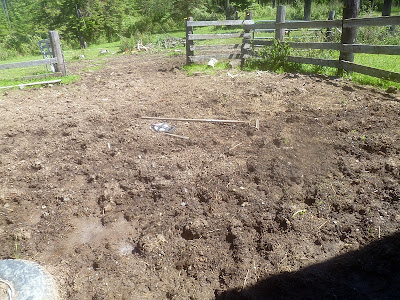 But I set myself a goal to plant at least three rows at a time before taking a break to straighten up my aching back (from bending over). 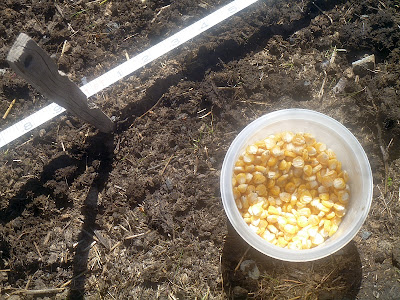 Each row was 20 feet long, so that's 60 linear feet of planted corn at a time. 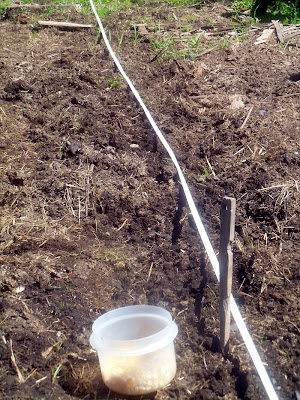 This pretty butterfly hovered nearby for over an hour. 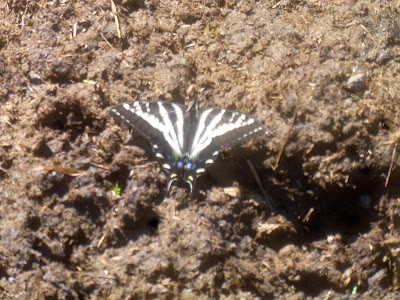 The cows were curious too. "Whatcha doing? Can we help?" 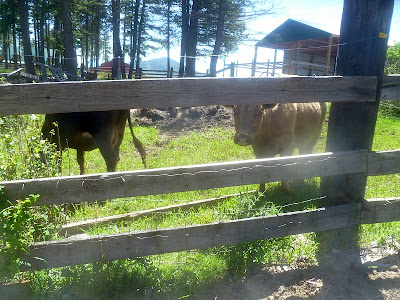 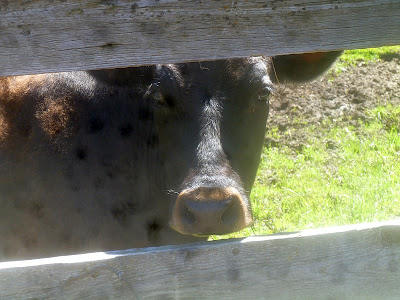 I also had the company of my two favorite hens, Cinnamon... 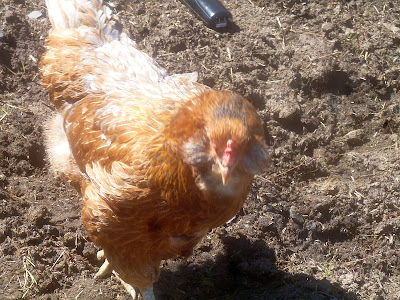 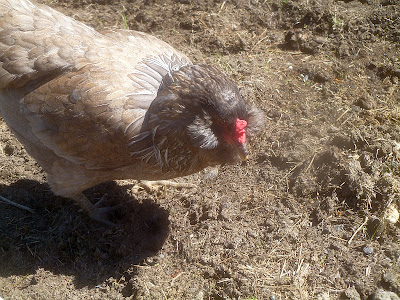 These ladies are always my boon companions whenever I do any barn work. Thankfully their little chicken brains didn't compute that yummy edible corn was just under the surface. 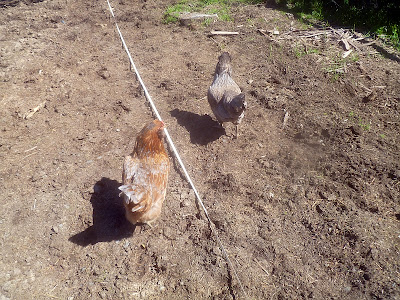 After I'd used up all the new seed corn I'd purchased, I took out the corn I'd saved from last year's (pathetic) crop. 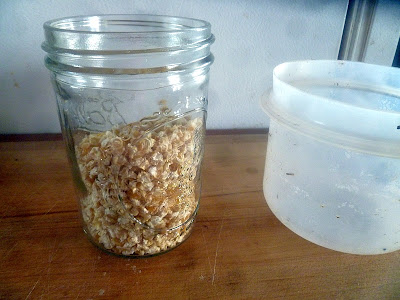 Little by little over the entire weekend, I planted corn until I had a section about 20x25 feet planted. Now we'll play the waiting game and see how much of it grows.

One of the reasons we're interested in planting this much corn is to feed the chickens as well as ourselves. Chickens love corn, and cracked corn mixed with wheat would make an excellent feed for them. It's been a long-term goal to grow our own chicken seed, so we'll see what this year brings.
Posted by Patrice Lewis at 5:29 PM