I am bringing to your attention what could be a once-in-a-lifetime opportunity. Yes that sounds dramatic, so let me explain. This is a long post, but I think an exciting one, so hang onto your hats.

Last month I, along with many other rural-themed bloggers, received an email as follows:

I came across your blog while doing research for a TV production company. We are developing a show and it's still in the very early stages, and right now we are castings our nets far and wide looking for characters. Here is the official casting notice:

Raw TV, the makers of the hit shows Gold Rush and Locked Up Abroad, are searching for individuals to feature as part of a new series for a major cable television network. Do you have the spirit of an American pioneer? Are you fed up with the world you live in today and imagine another - better - way to live? Do you and your family and friends ever talk about leaving society we know it, leaving it all behind and building a new world off the grid, with the frontier grit of your forefathers? If you are passionate about your beliefs and would be willing to share them with a national TV audience we would love to talk to you.

If this sounds like you, whether you have a plan in action, have a more long term dream or are already living out on the frontier, please email your contact details and a brief description of your situation to casting@rawtelevision.co.uk

Of course I immediately looked at their webpage, located here.

Frankly my first thought was this was a scam of some sort. Over the years I’ve been contacted by various and sundry shady-sounding organizations and this seemed no different. However I emailed back and asked for additional information. Bottom line, last month I had a delightful hour-long chat with a fellow named Adam Loeb out of New York City. (Raw TV has both British and American offices.)

Looks like this is legit, folks. And that’s where the once-in-a-lifetime bit arises.

This is the gist of what Adam explained. They’re looking to cast ordinary folks into an extraordinary situation, namely leaving the city and moving to a homestead. The “pioneer” term in the casting call mentioned above is not quite accurate. As Adam explained, “pioneer” has a slightly different meaning in Britain than it does in America. I suggested he substitute the term “homesteader” into future casting calls for a more accurate description.

I explained to Adam the differences between historical and modern homesteaders. Historically, homesteaders were those participating in the Homestead Act of 1862 which opened up the American West. Modern homesteaders, by contrast, are those interested in becoming as self-sufficient and independent as possible. They farm to feed their families and perhaps have a little surplus to trade or sell, but their livelihood isn’t farming.

Most modern homesteaders are NOT farmers. Farmers engage in agriculture for purposes of profit. I know many people who farm for a living. Their business is to produce a crop and sell it, and that’s their job. Most homesteaders don’t “farm” for a living; they merely produce food for their own family and usually bring in income through a regular job and/or a home business.

Raw TV recently produced a documentary series for the Discovery Channel called Gold Rush Alaska which followed several men seeking gold in the Yukon. It was a very popular series, Adam said, and now they’re trying to develop a new show which depicts people attempting to launch themselves into rural life, and documenting all the trials and tribulations and beauty and successes they may experience. 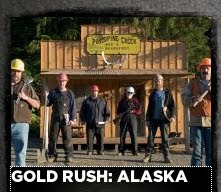 The concept is still not fully developed, so at this point things are flexible. But the next step is to start casting, and that’s the exciting part.

Adam stressed this is not a contest-based reality program where participants get X amount of money for “surviving” six months in the wilderness, or whatever. Nor will they be artificially pairing up incompatible participants, such as putting hippies together with militia folks. Nothing artificial like that.

Rather, this is an unfolding docu-drama, illustrating the American dream to become self-sufficient on a homestead. It will document the challenges inherent in building a life in the wilderness.

I asked where this would take place. Would participants be required to leave home and try homesteading at a location of the producer’s choice?

Adam said no; the location is not fixed, but it needs to be in a “visually dynamic” location such as Idaho, Montana, British Columbia, or something like that. Their preference is in the Pacific Northwest, Montana, or Idaho. He prefers to cast someone with an interest in settling in a wild area that has the potential to support a farmable homestead.

Adam was quite clear about the kind of person(s) they’re seeking. Participants should be planning on making this move to begin with. They’re looking for people who have passionately yearned for a homesteading lifestyle but just haven’t quite taken the plunge. In other words, they’re NOT looking for patently unqualified people who will fail. Rather, they’re seeking someone who will be happy to keep living out their self-sufficient dream life long after the cameras stop rolling.

I asked if participants would be expected to live a “pioneer” lifestyle, i.e. oil lamps and hand pumps and outhouses; or can they utilize modern means to get things done, such as tractors and power tools. He said participants absolutely will use modern methodologies. They’re not looking to re-create the 1850s; they’re looking to document how modern people set themselves up to be self-sufficient.

Adam knows that not many participants will have actual experience in homesteading, but he wants people to succeed. Therefore participants should possess useful skills (or the willingness to learn useful skills) to get them started on a homestead. In other words, if your most useful skill is shopping at the mall and gossiping on your smart phone, you’re probably not the best choice.

Adam asked me what kinds of people are most likely to fail in a project like this. I thought for a moment, then replied, “Those who think country living will be flawless, simple, and easy. The ones who think, ‘How hard can it be?’ The ones who think living in the country is all peace and love and universal harmony.” I said that country living is NOT simple, but it IS worth it. I said that homesteaders must expect to face the good, the bad, and the ugly. They must sometimes make decisions about their livestock which may be seen as cruel by urban standards (such as castrating a calf or butchering an injured animal). The ones who fail are the ones who don’t want to fence their garden against all those pretty deer, then don’t understand why their organic vegetables won’t grow.

But the ones who succeed have a willingness to face sometimes harsh reality, who don’t have an artificially rosy view of country living, and who don’t mind working hard and getting sweaty and dirty. Nor are they afraid to make mistakes.

Since this is TV, they’re also looking for “dynamic” people. I asked what he meant by “dynamic.” Apparently it has nothing to do with physical attraction, but rather everything to do with charisma and the ability not to be flat, monotone, and boring in front of a camera.

I asked what incentives or compensation participants can expect. This is still up in the air. The compensation and/or incentives will depend on the final format and direction of the show. They’re willing to consider things that might help the participants get started. They don’t want to interfere with or manipulate the natural progression of a developing homestead, except insofar as assisting with something big. (Yes, at this point it’s that vague.)

One idea, Adam said, is to find multiple families to come together in the same location. They definitely need more than one family to participate, but whether it is a random collection of strangers, or a band of friends who already had plans to move, is still open.

Whew. Is this a bizarre and exciting twist, or what?

At any rate, if you’re interested in this developing opportunity, you’ll need to send an email stating your interest, qualifications, and goals to:

If you apply because you’re reading this post, please tell them you got the information from me on Rural Revolution. In other words, somewhere in your email you should state, “I saw this information on Patrice Lewis’s Rural Revolution blog.” This way they’ll know where people got their information. (Besides, I told Adam I’ll be fascinated to watch this project unfold.)

Okay folks, now’s the time to do some serious thinking! And keep me posted!
Posted by Patrice Lewis at 5:42 AM