One in a zillion photo

Have you seen this yet? It's been making the rounds of the internet: 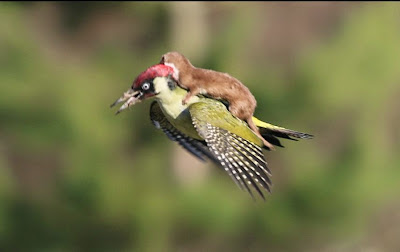 It's exactly what it looks like: a weasel on the back of a flying woodpecker. And no, by all accounts it's not photoshopped.

The caption I've seen is as follows:

A remarkable photo has captured a weasel on a woodpecker's back as the bird flies through the air. The photographer, Martin Le-May from Essex, said he "feared the worst" for the green bird after hearing "distressed squawking" during its struggle with the mammal at Hornchurch Country Park. After Le-May managed to capture the incredible image -- which has become a hit on Twitter since it was taken -- the creature managed to escape with its life. Picture: Martin Le-May

Kudos, Mr. Le-May. That was a one-in-a-zillion shot.
Posted by Patrice Lewis at 6:53 PM