We are getting what we're hoping is the last gasp of heat before we're released from this six-week-long stretch of 90+ temps.

Cooking during this time has been almost at a standstill as we resort to easy-to-fix meals, sandwiches, or other things that either aren't hot, or don't require cooking (which heats up the house).

So when it was my turn to prepare dessert for our weekly potluck, the only thought in my mind was: COOL.

Since we have a plethora of raspberries in the freezer, I thought about raspberry cream pie. I got only and found a wonderful-sounding recipe at the incomparable Pioneer Woman website.

The only modification I made from her recipe was to use graham crackers for a crust, rather than crushed Oreo cookies. Otherwise here's the recipe:

To make the crust, preheat oven to 350 degrees. Crust cookies in a food processor (or smash in a Ziploc bag with a rolling pin). Stir in melted butter until all combined. Pour into a regular pie pan and press crumbs all over the pan and up the sides. Bake for 3 to 4 minutes---just long enough for it to set. Cool crust completely.

Place raspberries on a plate or in an empty pan. Smash them with a fork, then sprinkle on 3 tablespoons of sugar. Stir together and allow to sit for 15 minutes.

In the bowl of an electric mixer, combine raspberry yogurt with the instant vanilla pudding mix (just the powder itself.) Beat on low until combined, about 1 minute. Pour in heavy cream and whip on low for 30 seconds. Stop the mixer and scrape down the bowl with a rubber spatula. Turn mixer on medium-high speed and beat for two minutes, or until mixture is thick.

Turn off mixer, then fold in raspberries until just combined. Pour into cooled pie pan and spread evenly. Freeze for two hours, or until very firm. Cut into slices and top each slice with cookie crumbs, dollops of whipped cream, and extra raspberries. Keep in freezer, allowing time to thaw before serving. 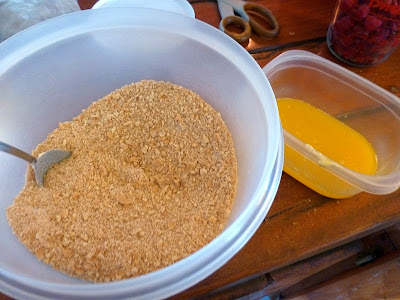 Then I patted the crumbs into two dishes and baked the crusts at 350F for ten minutes or so. (Just enough time to make the kitchen hotter than it already was.) 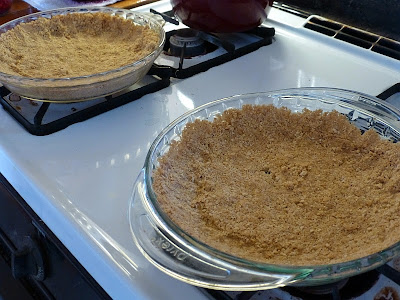 Meanwhile I took two cups of frozen raspberries and let them defrost for awhile. In the heat, this didn't take long. 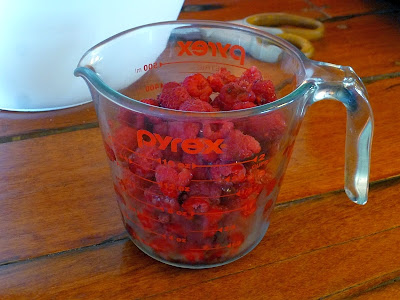 When they were half-defrosted, I added three tablespoons of sugar, mixed it in, and let the raspberries sit and "juice up." 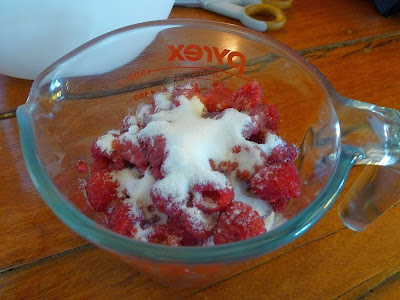 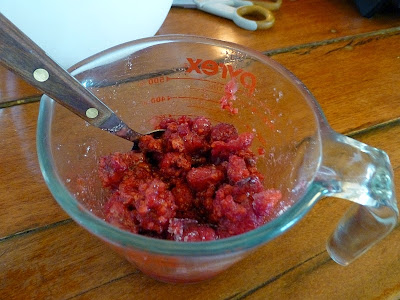 While the raspberries sat, I mixed cream and yogurt... 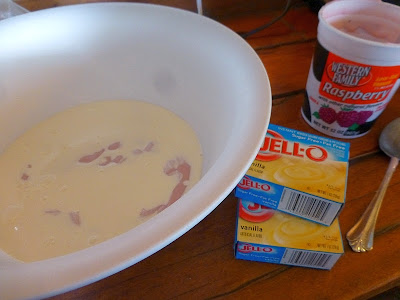 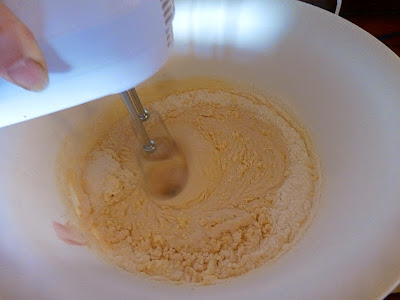 In went the sweetened raspberries. 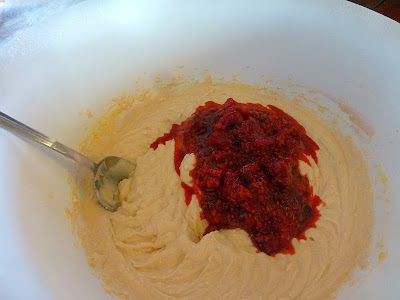 With everything stirred together, it was absolutely delicious. 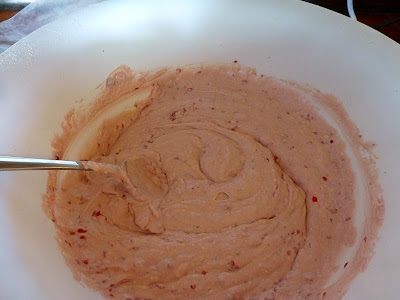 I had to wait until the pie crusts were cool before spooning in the filling. I think next time I'm going to triple the recipe, as the pie pans weren't quite full enough (in my opinion). 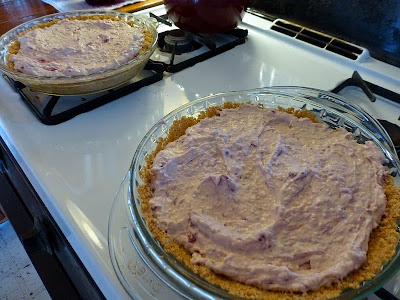 I covered and froze the pies overnight. For the potluck, I whipped some cream and brought some additional raspberries as garnish. A very nice and easy dessert for a very very hot day!
Posted by Patrice Lewis at 8:44 AM