A new addition to our household

For some time now -- several years, in fact -- Younger Daughter has wanted a parrot.

Not a huge parrot such as a macaw, but a smaller parrot. However we've always told her it would be difficult to keep a parrot in north Idaho because our winters get so cold and parrots do not handle cold weather well. Additionally, since our home is heated with wood, our inside temps can drop to the low 50s at night during cold snaps. We'll all used to this and it's no big deal, but tropical parrots would have a hard time adapting.

So started Younger Daughter's diligent research into a parrot breed that can handle cooler (not COLD, but cool) temperatures.

She had other criteria as well. She wanted a bird that didn't screech (macaws are famous for their glass-shattering voices) as well as a breed that could be trained easily to talk and be handled. After a long search, she settled on a breed called a Quaker Parrot, so known because they have a tendency to "quake" their heads in an adorable fashion. They are small parrots (sometimes called "parakeets") that measure about 11 inches from top to tail.

Quaker parrots are tolerant of cooler temps; they don't "screech" loudly (they screech, but it's not obnoxious, and they can be trained out of it), and they can easily be trained to talk. They have a lifespan of about 30 years, so Younger Daughter must be prepared for a long-term commitment. They require frequent interaction (in other words, they are best placed with families that are home much of the time, as opposed to homes where people are away most of the day).

Armed with every imaginable fact and figure, Younger Daughter presented her case to Don and I. This kid had done her homework and knew an impressive amount of Quaker behaviors, training, intelligence, breeding, health, caging requirements, and other issues.

We agreed she could get her parrot. She located a reputable breeder and made arrangements to meet with her. In the meanwhile, she started pulling together the necessary equipment.

She found an enormous birdcage for an amazing price (an older couple with health issues who was reducing the number of pet birds they kept). The cage has a stand with rollers on it. The whole thing was so large it barely fit into the back of the car with the seats laid down. 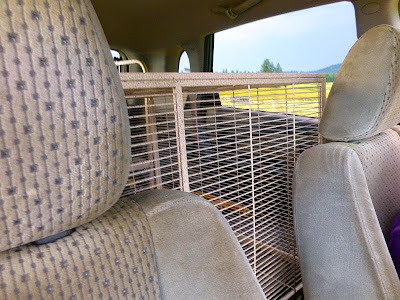 Although it was in squeaky-clean condition, Younger Daughter cleaned every inch of it. 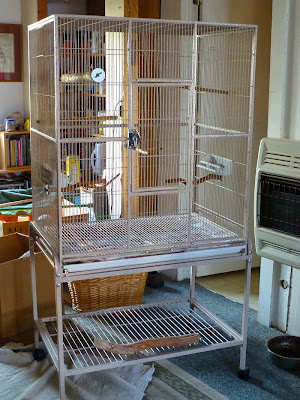 We'll also get a low-grade cage warmer (apparently they're not expensive) before winter hits, for use during the coldest nights and in the early morning before we get the woodstove going.

Because the breeder lived about as far out from Spokane as we do -- but from a different direction -- we agreed to meet at a hole-in-the-wall place called Sparky's Bird Store on the north side of town, which specialized in nothing but pet birds. At first I thought to myself, "Sparky's Bird Store. Yeah right. How can a place like that stay in business?"

Well my goodness, it was crowded with customers. Novice bird keepers, experienced bird keepers, curious visitors... I never knew there were so many bird enthusiasts in the region. And they all knew Sparky. An older fellow with a passionate love of birds, the guy was walking encyclopedia.

The breeder had dropped Younger Daughter's bird at the store a couple of hours before and then gone to a doctor's appointment. We got to Sparky's early and had no problem waiting for the breeder's arrival since there was so much to see. 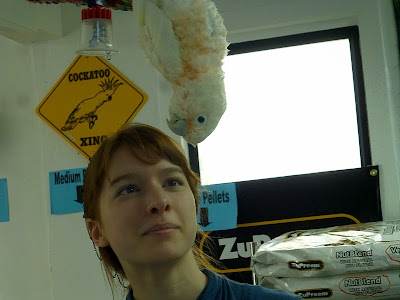 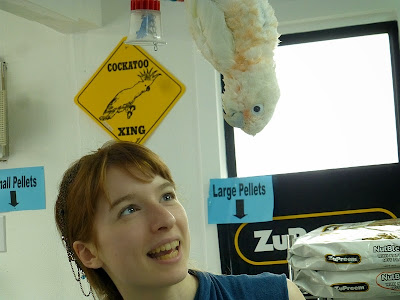 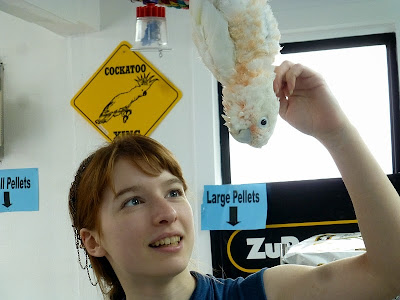 We also met a Military Macaw... 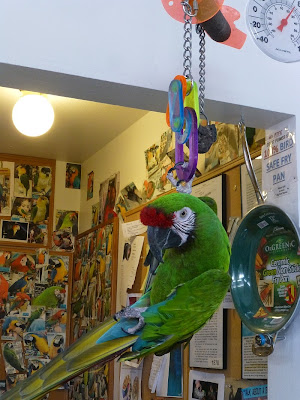 ...who conceived an enormous affection for Older Daughter and bobbed his head and danced on her arm for as long as she would let him. Sparky said it's because his first owner (over 20 years ago) was a teenage girl, and he loves teenage girls. "With parrots, memory is everything," Sparky told us. 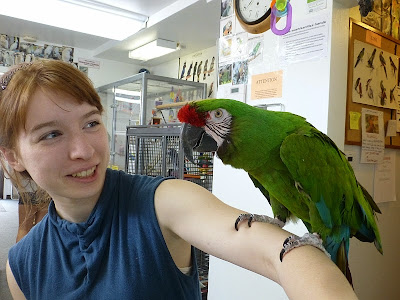 At long last, Younger Daughter got to meet Lihn. 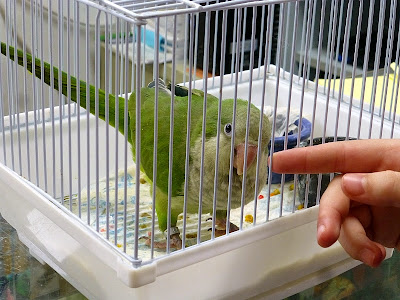 She fell in love with the lively, curious young thing. She listened intently as the breeder explained feeding, watering, training, health, etc. At thirteen weeks of age, Little Lihn is not quite "weaned" and onto solid food, so Younger Daughter will be hand-feeding her for another couple of weeks and transitioning her to solids. But since she's been hand-raised, Lihn is already tame, affectionate, and curious.

We had bought a smaller traveling cage at a thrift store, and Lihn did very well driving home with us.

Here Lihn is getting spoon-fed. It's a messy business. 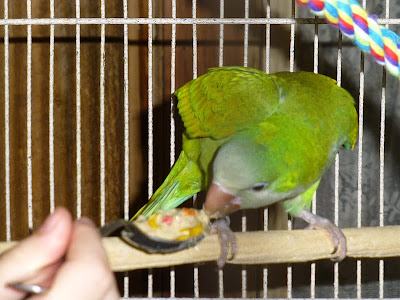 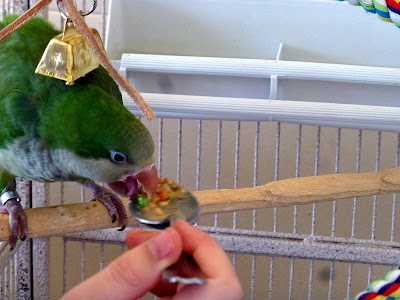 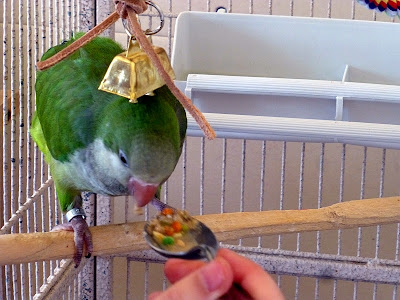 It didn't take Lihn any time at all to weasel into our affections. She's a playful curious little girl, and loves anything shiny or that makes noise (i.e. bells). 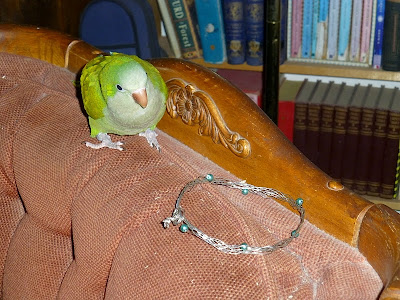 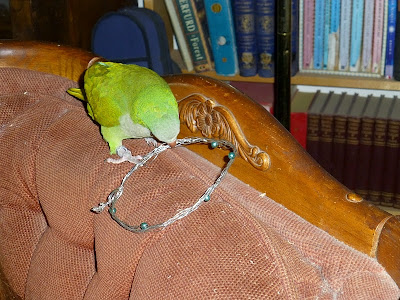 She also loves to rip paper. She doesn't chew or swallow it, just rips it. 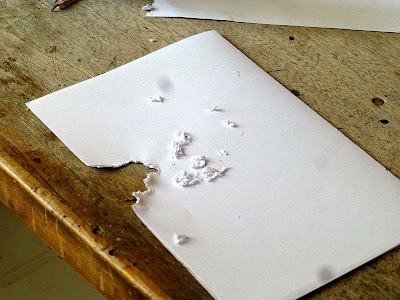 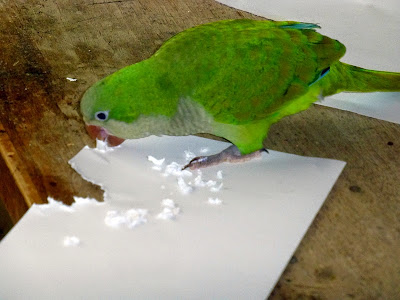 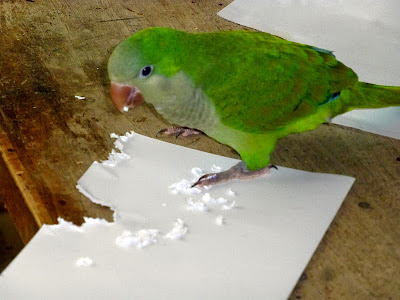 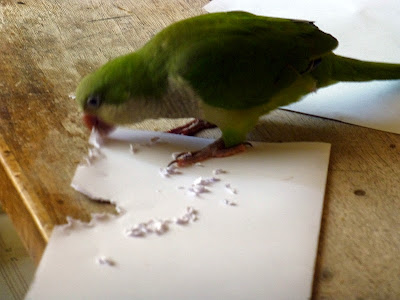 She's clever with her beak and can even pick up flat coins from a flat surface. Then she carries them around. Very cute. 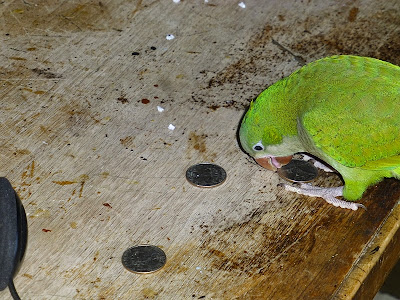 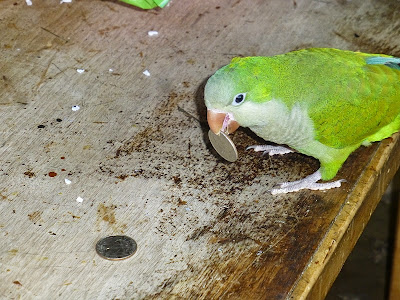 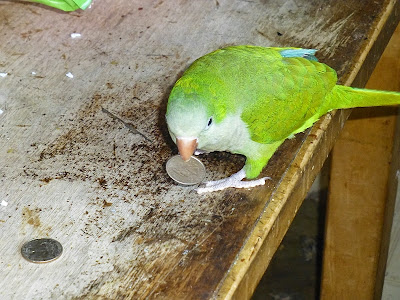 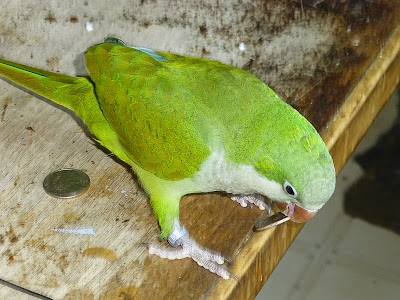 And baths! She loves to get wet! 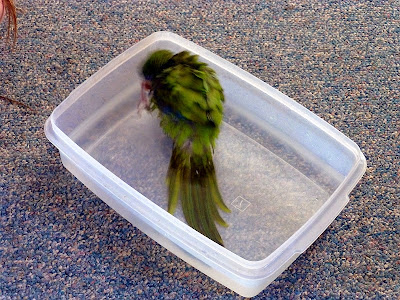 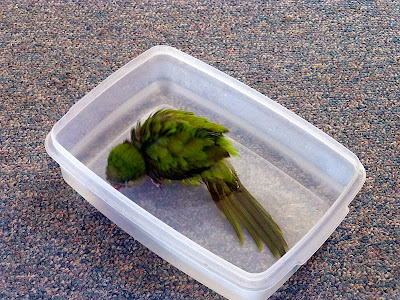 She also plays a game called "Target" in which we put her on the floor and she chases after our trailing fingers, like a cat after a mouse. It makes us laugh every time we see it.

This little girl has got a TON of personality and Younger Daughter couldn't be more pleased. We're all enjoying her charming antics. 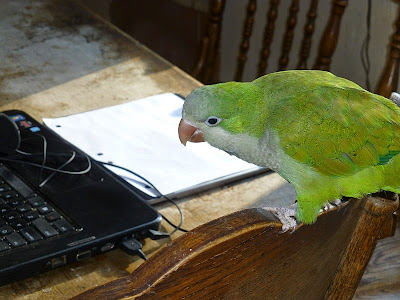 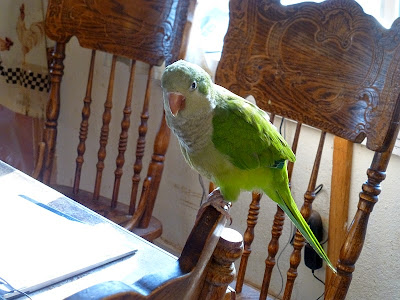 Posted by Patrice Lewis at 7:16 PM