Recently I purchased a book entitled Worthless: The Young Person's Indispensable Guide to Choosing the Right Major by Aaron Clarey.

The blurb on Amazon.com sums it up as follows: "'Worthless' is the single most important book young men and women can read before they attend college. While teachers, guidance counselors and even parents are afraid to tell you the truth in an effort to spare your feelings, 'Worthless' delivers a blunt and real-world assessment about the economic realities and consequences of choosing various degrees with a necessary and tough fatherly love. Don’t lie to yourself. And certainly don’t waste four years of your youth and thousands of dollars in tuition on a worthless degree. Buy this book and understand why it is important you choose the right major. The book itself could be the wisest investment you ever make." 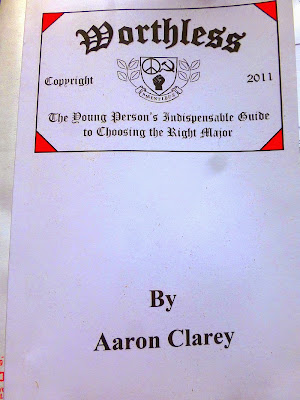 Since our girls are 16 and 18 and strongly planning for their future, I thought this book would give some ammunition against those who feel we should blindly send them to college regardless of their interests. After all, a college degree is necessary in today's competitive marketplace... isn't it?

Well I couldn't put the book down. Because here's the thing: THE GUY THINKS JUST LIKE WE DO.

The Big Concept this author attempts to convey is to match SUPPLY with DEMAND. Don't waste time and money getting useless degrees for which there is no demand. There are far more degreed individuals than there are well-paying jobs to employ them, which is why so many college graduates can't find jobs commensurate with their education.

The author additionally warns young people that it isn't just the UNemployment rate they should be worried about; it's the UNDERemployment rate. Y'know, the barista working at Starbucks with a Master's Degree in Gender Studies who has $90,000 in student loans weighing her down.

In a nutshell, the author suggests that unless you plan to study a STEM subject (Science, Technology, Engineering, Medicine) -- and even then, there are subcategories of these subjects that are worthless -- then young people are better off going to a trade school or creating their own skills set and/or employment opportunities.

The author points out that there are endless counselors, teachers, and other related folks who will happily guide young people (especially those without any burning STEM-career ambitions) toward the plethora of useless degrees that universities grant. After all, these young people are the fodder for the massive "college-industrial complex" I discuss here.

As an exercise for college kids, the author had some students list the top five things they wanted to buy or planned to buy in the near future. Examples included: gasoline, video games, clothes, sports car, motorcycle, smart phone, alcohol, food, jewelry, computer, movies (DVDs), etc.

These areas of study sound impressive until you compare the two lists side by side. Very few of the major areas of study will actually lead to producing anything the students wanted to buy, such as vehicles, clothes, jewelry, electronics, gasoline, food, etc.

Not one person listed "a lecture on women's studies" or "a visit from a social worker" on the list of things they wanted. And while such occupations as historian and psychologist have their place, there are far more people vying for these positions than there are decent-paying positions available. And some things, such as art and music, are often best learned through non-academic channels by talented and passionate people rather than achieving degrees in these areas.

To further illustrate his point, the author uses a "village" example. Imagine a small, self-contained village (as Medieval villages used to be). The village has everything its people need: farmers, butchers, knights (protectors), metalsmiths, weavers and clothiers, tanners, blacksmiths, etc. "Everybody had a job or a task that carried their weight in the village," the author writes. "What you did NOT have was the professional activist, the social worker, the starving artist, the trophy wife, the socialite or the village welfare bum. Everybody had a job and everybody's job provided vital and required services and products to the village."

Now blow the village up in scale to embrace the entire nation and see how the pursuit of useless majors fits into this model. The author illustrates this point by highlighting a news article about a young man who returned to graduate school and spent three years and $35,000 to get his Master's degree in -- are you ready for this? -- puppetry.

Now clearly the Medieval village analogy is not as black-and-white as the author paints, but he makes superb points... the biggest of which is: before you spend many years and thousands of dollars obtaining a degree, make sure there is a suitable market for that degree in the first place. Will your degree provide something vital to the free market, or will you only be employable in a government make-work job or in a position not commensurate with your education?

Back in 1980 when I went to college (and when a higher education was one-third the price, accounting for inflation, that it is now), my dad had much the same idea. "Major in whatever you want," he told me; "but always make sure you have a skill you can fall back on." I majored in zoology, and since there were long stretches of time between getting well-paying jobs, I fell back on my skill of typing, and whatever associated skills went with it (secretarial, administrative, desktop publishing, etc).

(I didn't need to go to college to learn to type. Just sayin'.)

People have their whole lives ahead of them to study the subjects they find fascinating. Older Daughter, for example, is interested in Celtic mythology and folklore (fairies, elves, etc.) and has many books on the subject. She's quite an expert in Celtic literature. But what if we were to encourage her to "follow her dream" and get a Master's Degree in Celtic Literature, accrue $80,000 in debt, and face serious underemployment after graduation because no one is hiring Celtic Literature experts? What kind of parents would we be to encourage that?

The idea is that if you have a burning passion – say, literature or women’s rights or the environment – then learn about and become active in those areas in your spare time. Don’t waste four or more years of your life and go into tens of thousands of dollars in debt achieving a degree in your passion without first confirming whether or not there are even jobs in that field. Young people should be acquiring whatever skills will make them marketable, as determined by real-life markets (not smooth-sounding fantastical claims by educators with a product to sell).

Ever blunt, Mr. Clarey writes: "Declaring a worthless major is simply shouting out to the world, 'I’m a parasite and have no intentions of working for a living. I want to do what I want to do and I want the rest of you to pay for it. I ultimately want to produce nothing society wants, but in return I demand other people slave away to make me MP3 players, computers, video games, as well as engineer hybrid cars and whatever else I want. I also want society to create some make-work job for me so my ego isn’t bruised and I can make-believe I’m a real-world-live adult too. And if you dare point out what I’m doing in the real world is nothing more than parasiting off of others, I’ll cowardly hide myself behind some altruistic crusade and accuse you of being a racist, a misogynist, or a hater of children.'"

As I wrote in a WND column, "I believe everyone should partake of higher education to qualify them for a productive adulthood in which they can make a living and support a family. But 'higher education' is not limited to college, especially for an academic degree in (let’s face it) an impractical field. Rather, higher education should include training, apprenticeships, trade school or the old-fashioned working your way up the ladder from humble beginnings. Too many people graduate with elegant degrees but they can’t plumb, wire, build, sew, cook or tinker their way out of a paper bag and must hire well-paid experts to do this for them.

"Additionally, young people ought to be cultivating the intangible but valuable skills all employers seek: a high work ethic, dedication, the ability to arrive on time, to perform a task without complaint and (after training) without supervision, the ability to write coherently instead of like a texting monkey, the ability to speak clearly without saying 'like' or an expletive every fourth word, and other indefinable skills that raise them head and shoulders above the crowd.

"The nice thing about college is it’s always there. Nothing says you must attend college at 18. You can attend anytime. That door never shuts.

"But a staggering debt at the tender age of 22 can shut doors – lots of them. Please, think over your future plans carefully before plunging yourself into the pit of debt."

(Our neighbor's 18- year old son is now apprenticing as a butcher. Wise choice.)

The book "Worthless" is short (171 pgs), easy to read, concentrated, and pulls no punches. As far as I'm concerned, it very much lives up to its subtitle of "A Young Person's Indispensable Guide to Choosing the Right Major."