It's hot. We've bounced from chilly enough to think about starting a fire in the woodstove, to hot enough to cook an egg on the dashboard, in the space of two weeks... so we're all trying to adjust to the temperatures. 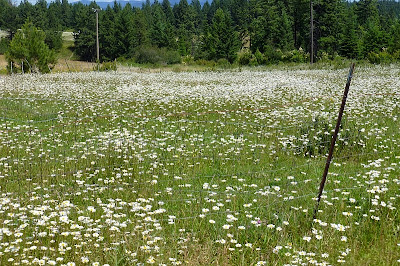 This is also when the oceanspray blooms. 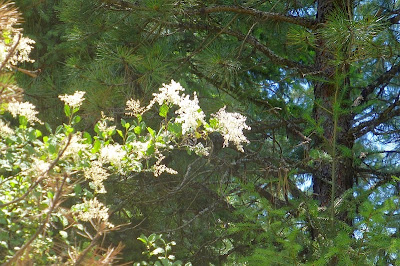 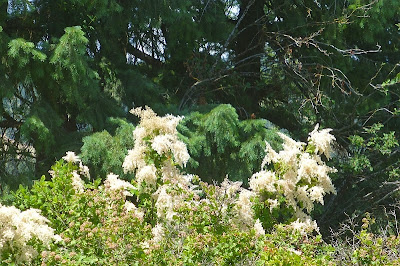 It's good haying weather -- hot and dry, with no rain in sight -- and many fields are getting mowed and baled. 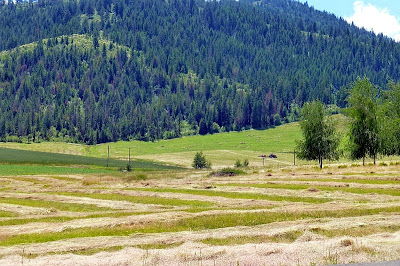 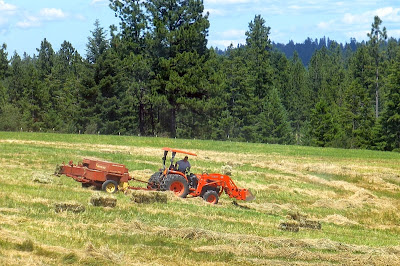 Right now Wednesday's temperature promises to hover around 100F. We have friends in California and Oregon who are reporting 110F temps. Gack. 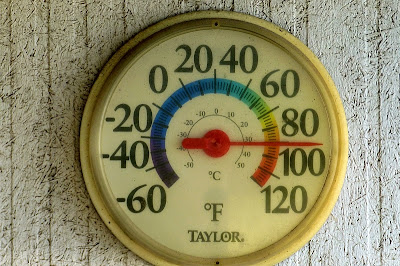 We decided to move the critters from the pasture to the wooded side of the property. It's not humane to let animals bake in unrelenting heat with no shade or shelter, if we can offer them an alternative.

So around noon, I saw the herd in the farthest corner of the property. 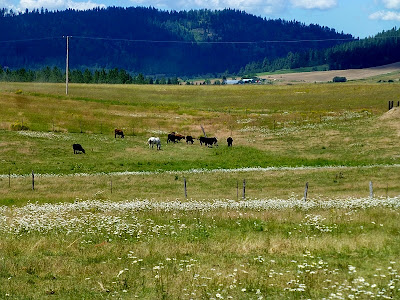 I hollered our universal cattle call, named after the first cow we ever had: "Bossy bossy bossy bossy BOSSY!!" Heads jerked up, bellows and whinnies sounded, and within seconds the herd was on the run. 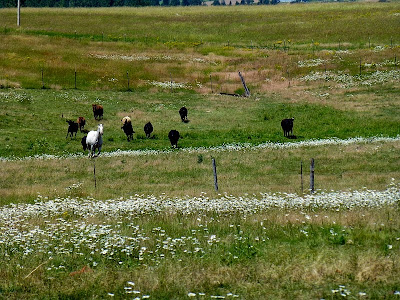 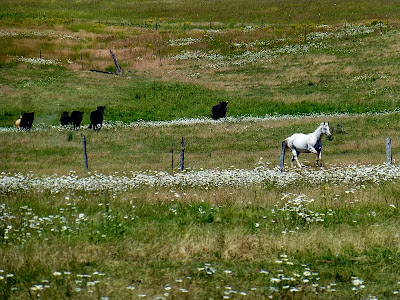 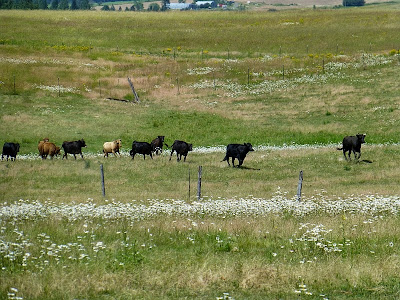 Within about a minute or two, everyone came barreling around the corner of the barn, heading for the gate into the woods. 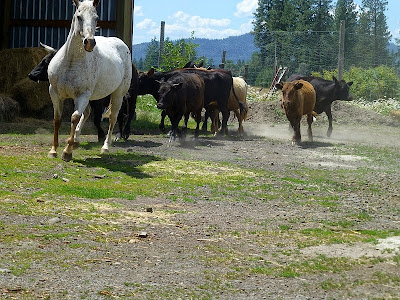 Delighted by the change in scenery, they fanned out and explored what there was to eat. 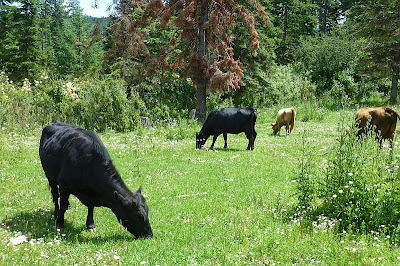 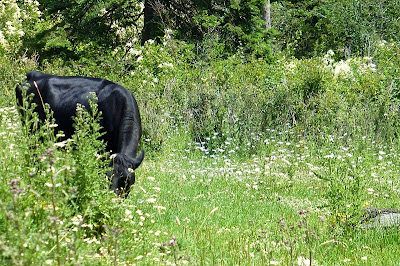 This was little Chuck's first chance to meet everyone in person rather than through a fence. He was a little nervous! 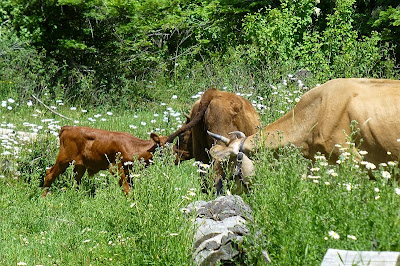 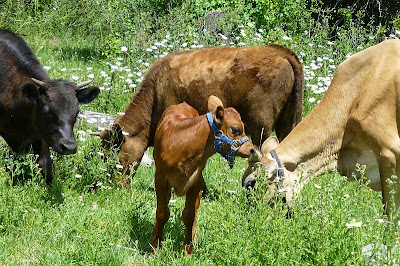 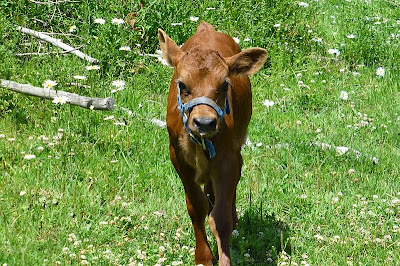 The animals settled right in, finding the good grazing. 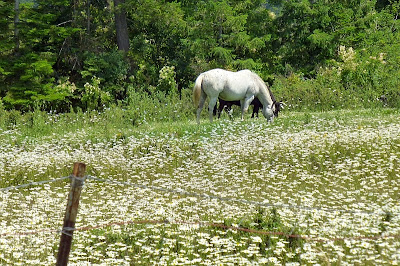 We noticed Sparky had a thick strand of mucous hanging from her backside, suggesting imminent birth. Good thing she's on this side of the property now, where she has shelter from the sun. 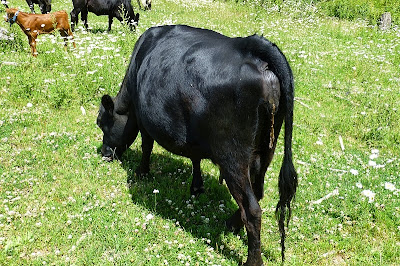 Later Don managed to get both Sparky and her yearling calf Dusty into the corral, where they immediately took advantage of the barn's shade. 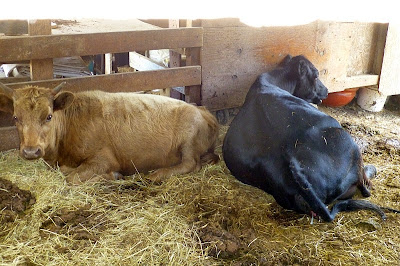 I'm gonna hazard a guess and say she'll have her calf within about 48 hours. 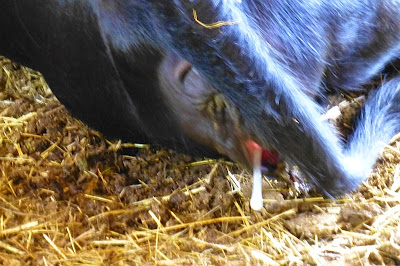 The barn was messy, so I cleaned it up... 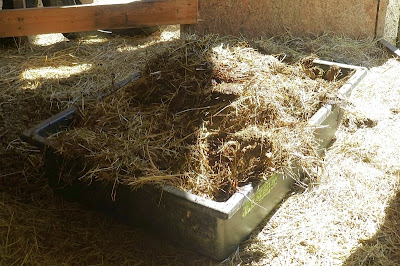 ...and spread some clean straw. Dusty inspects the results. 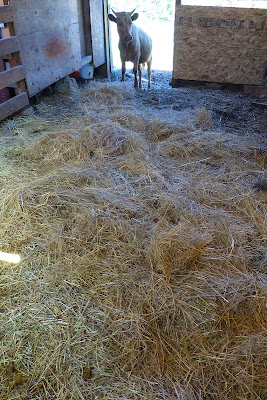 Now we're ready for both the heat and a new calf.
Posted by Patrice Lewis at 7:10 PM