I honestly thought I could remember enough of my schoolgirl French to teach Older Daughter the beauties of this second language, but no such luck. Though we acquired a number of useful books, the fact remained that after thirty years, my skills were too rusty. 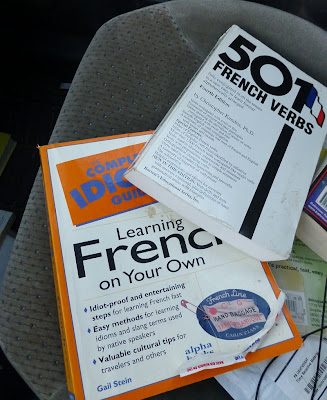 When I determined I wasn't qualified to teach her, we inquired at our local county high school. We found out the school is too small to offer anything other than Spanish. So I asked an older woman I know who is fluent in French (and who taught it for 25 years) if she could tutor Older Daughter. But this lovely lady felt too busy to take on such a commitment, so she referred me instead to a small in-home facility in Spokane called La Petite Maison Française.

This is run by a very French (imagine me saying that with a very French accent) woman who teaches both French and Spanish. She gives private classes in a petite maison in her backyard. (This photo was taken at dusk, hence the weird colors.) 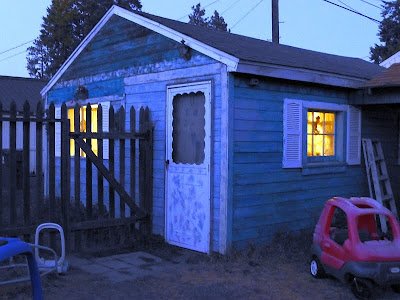 Mme. Sessard teaches French by immersion. Older Daughter has had a start with the language (in both accent as well as basic vocabulary) so she's picking it up quite quickly. Sitting quietly in a corner (and snapping this circumspect photo, I might add), I'm also re-learning a fair bit as well, so Older Daughter and I can practice during the week.

Hey, when you homeschool you have to roll with the punches. We'll continue these private language lessons as long as we can afford them. Et pour maintenant, je suis satisfait.
Posted by Patrice Lewis at 3:58 PM