Here's an easy-peasy recipe that everyone in our family adores: orange roast chicken! I have no idea where I picked up this recipe, but it's definitely a family favorite.

Start with a chicken. 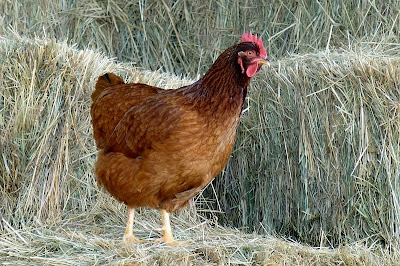 (Well okay, you might want to start with a chicken a little more processed than this.)

Here's a bird we had butchered last year that's been living in our freezer ever since. 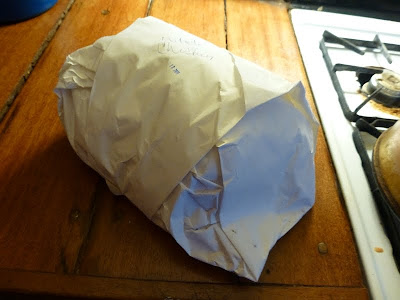 I took it out of the freezer and set it by the woodstove for a few hours to defrost. 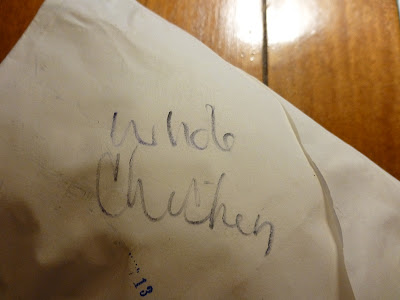 Rinse and pat the bird dry. 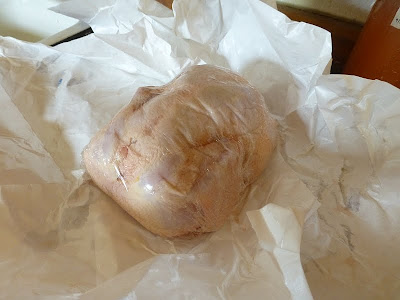 Here's the recipe, a little faded with use. Be sure to preheat the oven to 425F. 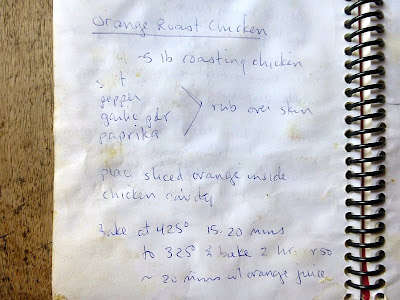 The magic ingredient in this recipe is the rub, which consists of salt, pepper, garlic powder, and paprika in whatever proportions you like. We make this recipe often enough that I keep a jar of pre-made rub in my pantry. 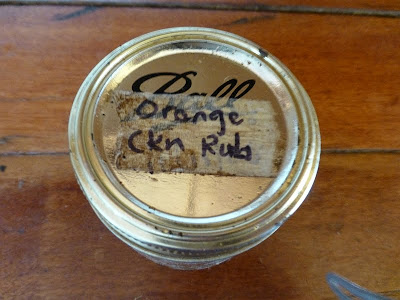 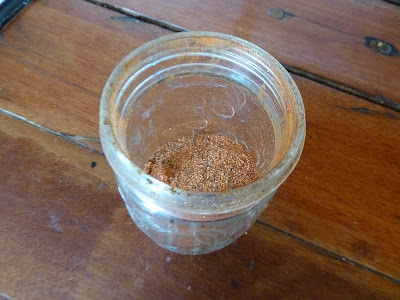 Rub the spices over the damp skin of the bird, anywhere there's a surface facing up. 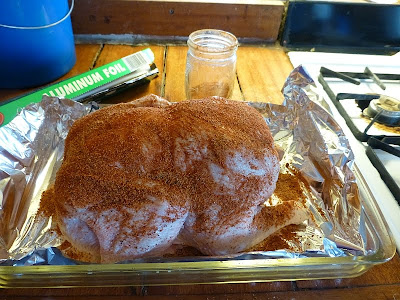 Pop the chicken in the oven -- dry -- for about 20 minutes in order to lightly bake the skin. 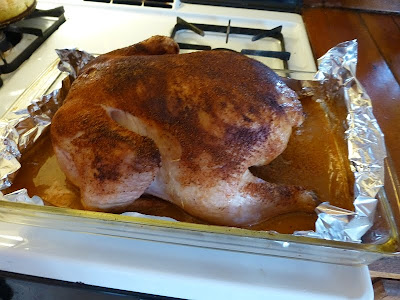 Then reduce the oven temp to 325F and about every 20 minutes or so, baste the chicken with orange juice. I like to make the orange juice a little more concentrated than usual in order to heighten the flavors. I also use a fair bit of the orange juice -- up to a quart -- because we all love the drippings. Here I'm using a turkey baster to baste. 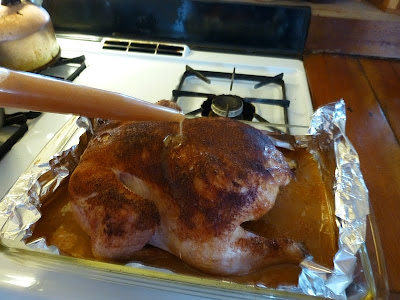 It takes about 2 1/2 hours to bake the bird, depending on the size. Toward the end I also make a pot of rice and a vegetable (usually peas). 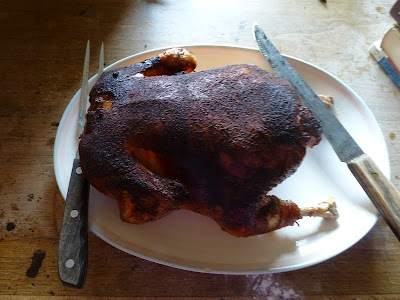 It comes out beautifully crisp and tender, and let me tell you we fight over the skin. 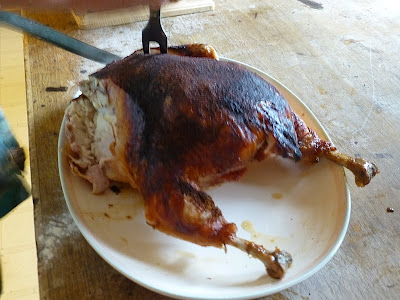 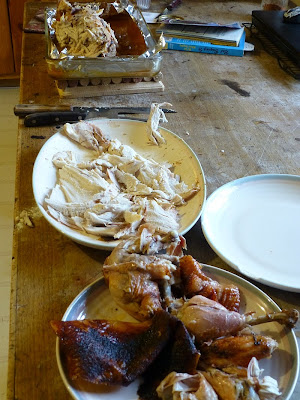 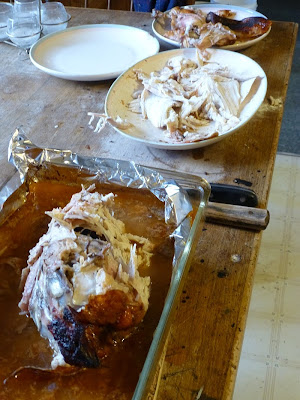 Normally after we finish dinner, I debone the bird and we eat the leftovers until they're gone. Usually I'll simmer the carcass into stock. But this time I wanted to try something new.

One of the deficits in my extensive pantry of home-canned food is sauces and gravies. I'm fully aware that flour, milk, or oil-based items shouldn't be canned. But there's also no question that sauces and gravies can make an otherwise bland mix of foods far more palatable. The gravy from this orange-roasted chicken is so good -- and it doesn't contain flour, milk, or oil -- that I knew it would be ideal for canning. So I decided to try an experiment.

That evening after dinner, I put the remainder of the unused orange juice, as well as some additional concentrate, into the Crockpot. 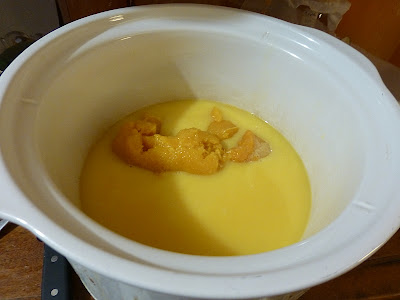 Then I took the chicken carcass... 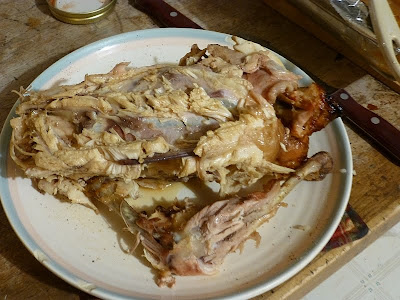 ...and added it to the orange juice. I covered it with a generous layer of the rub (salt, pepper, garlic, paprika). 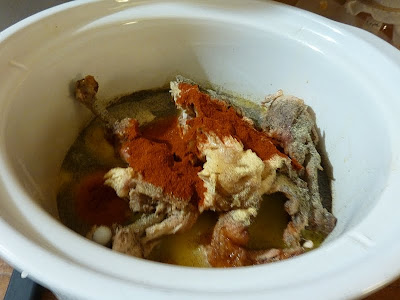 I filled the rest of the Crockpot with water, set it on low, covered it, and let it cook all night long. 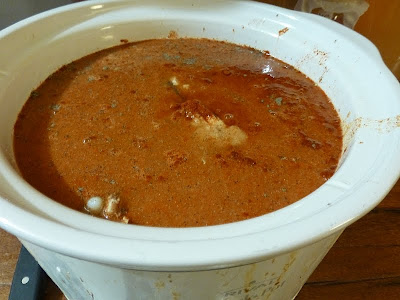 By morning, the bones were bare and the contents of the Crockpot had turned into a rich, spicy, orange-y, delicious-smelling broth. 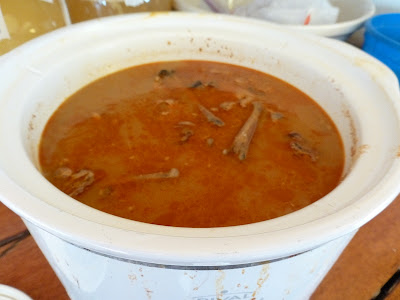 I put a colander over a stockpot and poured the entire contents of the Crockpot through, straining out everything but the rich broth. 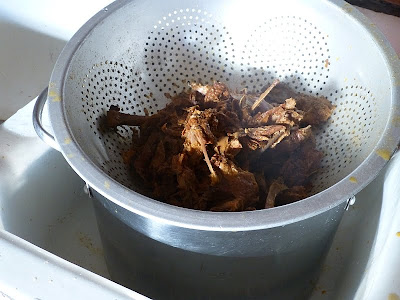 (This is what it looked like when the colander was removed.) 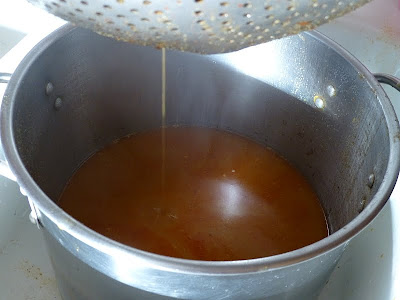 I filled eight pint jars with this broth. 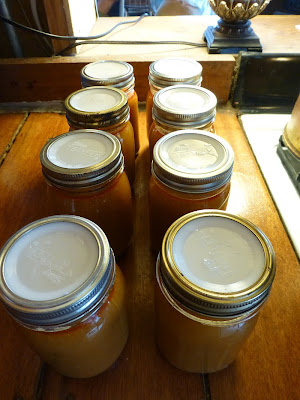 Because the broth is meat-based, I took no chances and pressured-canned it as I would any other meat. For pints, this meant 75 minutes at 13 lbs pressure (adjusted for our elevation). 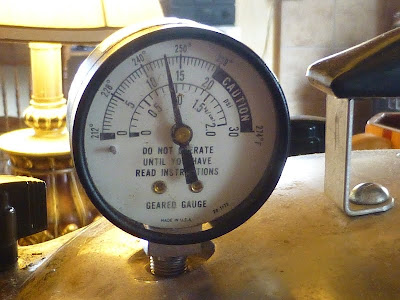 I also canned up a few jars of extra beef broth I had in the fridge, since I had the room in the canner. 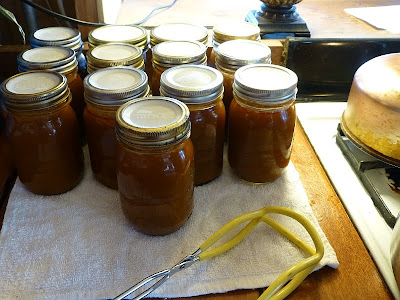 By morning the broth had settled in the jars, as you can see. 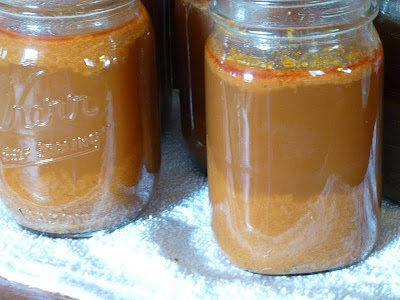 This experiment was so successful that I will absolutely repeat this procedure every time we have orange roast chicken.

This is how a pantry of home-canned food is built. Not necessarily in dramatic day-long marathons, but in increments. A few pints here, a few quarts there, and pretty soon you've got a decent pantry that will feed your family during hard times. 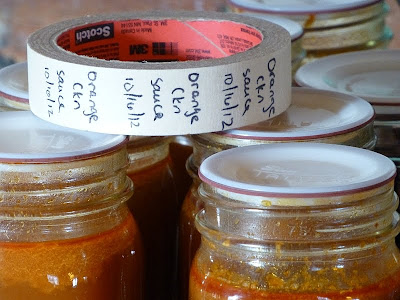 How cool is that?
Posted by Patrice Lewis at 7:55 PM