About twice a year, we all get a hankering for quiche. I don't make it very often because it takes a long time, and when I do make it, I try to make enough extra to freeze.

I picked a day when I didn't have anywhere else to go, and could take the necessary time to make this dish. I also decided to quadruple my recipe -- quintuple it, actually: four full-sized quiches, and three tart-sized ones. 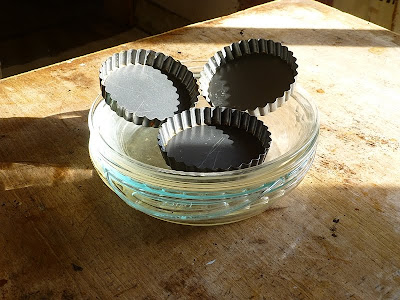 I started by making the pie crusts. 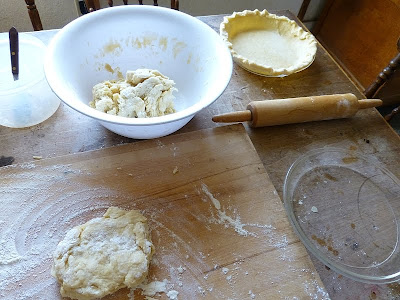 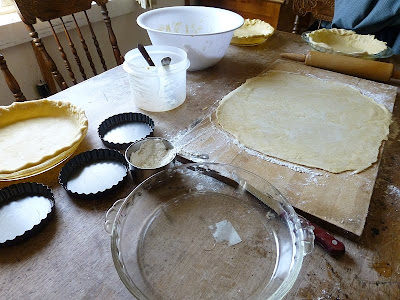 For the filling, I made one enormous batch for the four larger quiches. These larger pies were destined to have bacon, broccoli, and onions. The smaller bowl will be the filling for the three tart-sized quiches, which has less broccoli, some shrimp, and no onions. Quiche is easy to customize, as long as you include three eggs per pie. We have no shortage of eggs around here. 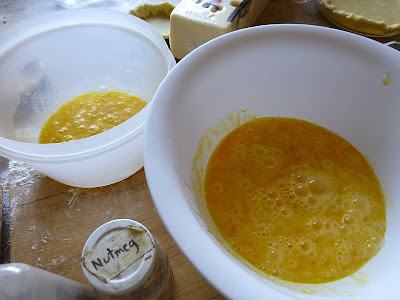 I added a bit of pepper and a dash of nutmeg to the eggs. 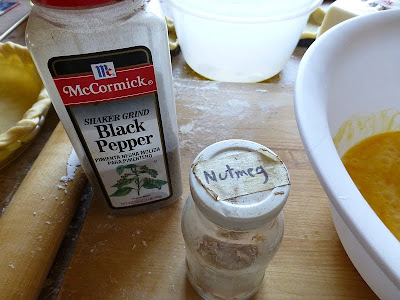 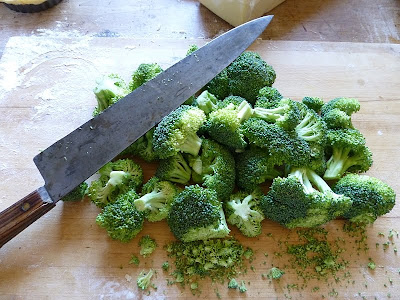 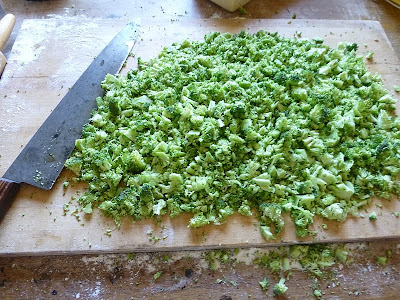 Scald some milk, about half a cup per pie. 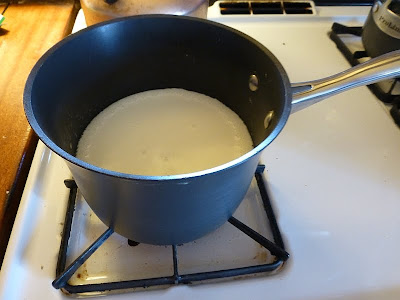 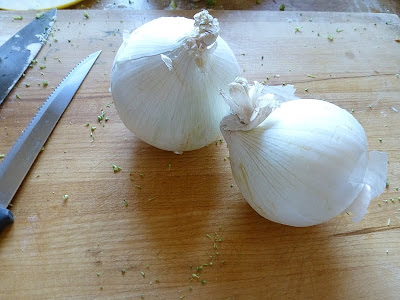 Another reason we don't make quiche as often as we'd like is because the cheese can be expensive. While quiche is one of those flexible dishes where you can add just about anything (the common base ingredient is eggs), we like ours with Swiss cheese.

And have you priced Swiss lately? 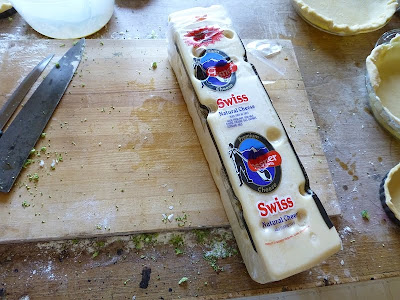 Lydia begs a piece of cheese from Older Daughter. 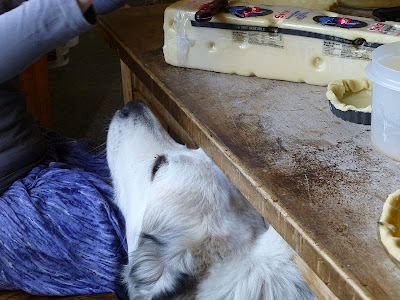 I also bought just a bit of shrimp. The girls love shrimp in quiche. I like shrimp but not in quiche, so I put shrimp in the small tart-size pies (along with no onions). 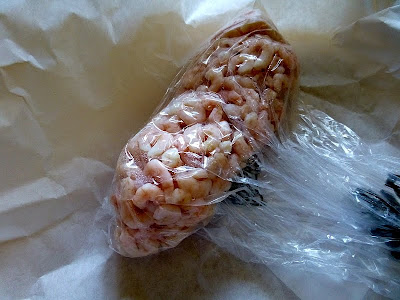 The ingredients pile (so far) for the big pies... 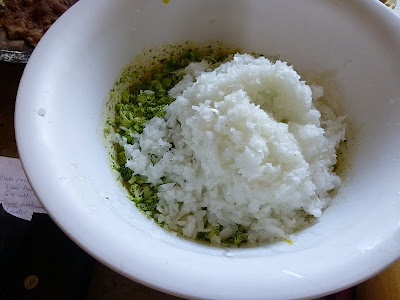 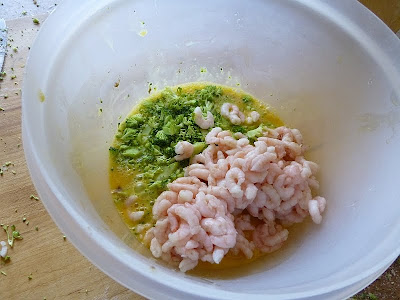 I added some bacon bits I canned earlier. 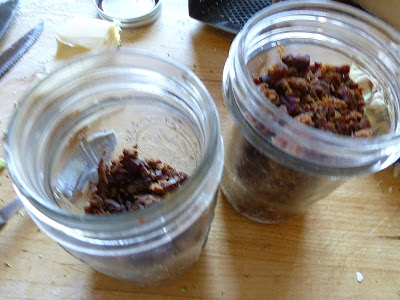 Grating the Swiss, which is added to the filling mix in both types of quiche. 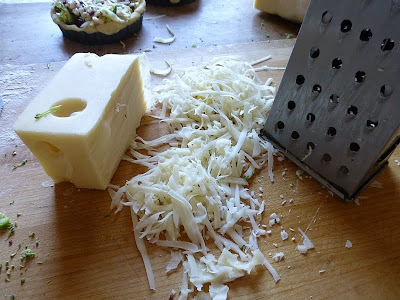 Adding the scalded milk. After everything is mixed, I also sprinkle grated cheese over the top of each pie. 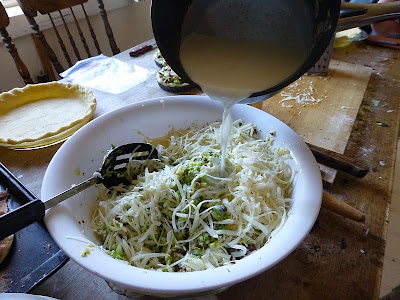 I overestimated the amount of pie dough to make, so I made "cinnamon crust" (in front) with the leftover. 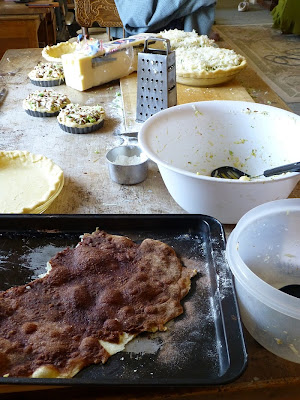 Even though I thought I was being generous in quadrupling the ingredients for the large quiches, I only ended up with enough to make two pies... 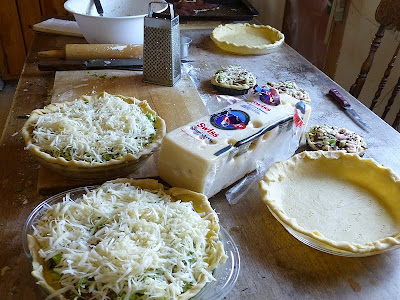 ...leaving me with two empty pans of pie dough. 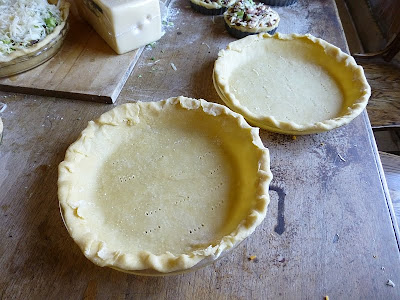 So I wrapped them (separately) in Ziplock bags and put them in the freezer until such time as I might need them. 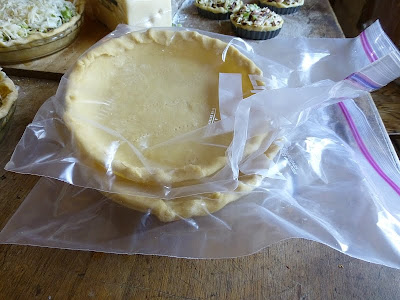 I also divvied up the Swiss and froze it in manageable sizes. 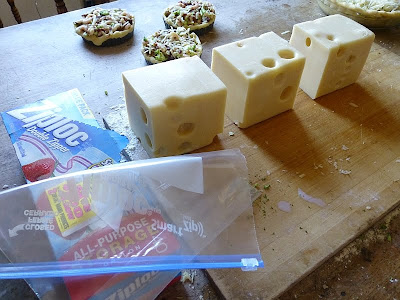 The quiche is baked at 450F for ten minutes, then 350F for another 45-or-so minutes (until it's browned to your satisfaction).

While it was baking -- ug -- I had to tackle the kitchen. I have the most astounding talent for dirtying every possible item in the kitchen while doing a cooking project. 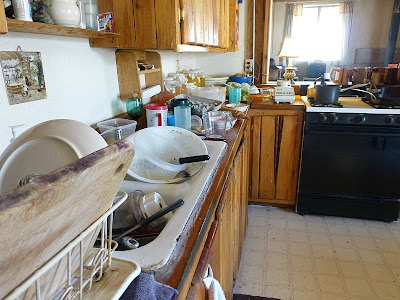 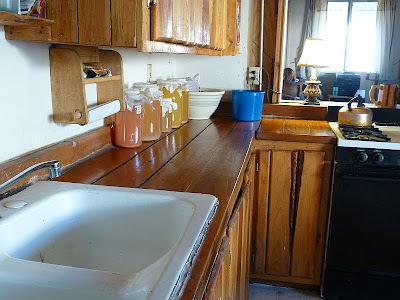 ...with the drain rack stacked high. 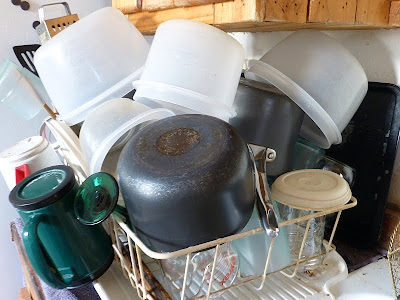 The quiche, done. No extras to freeze after all, but a good hearty meal for a cold evening. 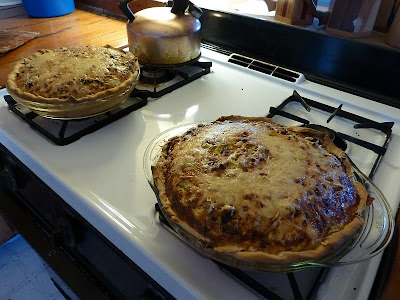 Posted by Patrice Lewis at 9:56 PM