Well, yesterday was a momentous day: it was Younger Daughter's first orthodontist appointment.

We've known for some time that braces were inevitable. Her upper teeth are massively crowded and growing out of her gums at odd and creative angles. At first we thought it was because her baby teeth weren't dropping out as they should and crowding her permanent teeth, but a trip to the dentist confirmed that those weird sticking-out-of-her-gums teeth were her permanent ones. Oh dear. 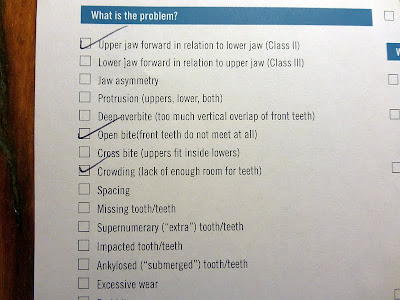 This is in contrast to orthodontic treatments in the 1970s. I got braces when I was 16, but first they had to pull seven teeth (four molars, two cuspids, and a peg tooth in my palate, if I remember correctly). Then after the braces were installed, I had jaw surgery to correct a severely recessed jaw (my teeth were wired shut for eight weeks). I haven't had a bit of trouble with my jaw or teeth since, so this complicated course of treatment definitely worked.

So Younger Daughter's anticipated treatment is mild by contrast, thank God. Surprisingly, it is also more affordable than we anticipated. Don and I were mentally bracing ourselves to hear a treatment cost of anywhere from $10,000 to $15,000 and figured we'd be paying the orthodontist forever. But in fact the entire procedure from start to finish will cost us $5000. While this isn't peanuts, at least it renders it more affordable.

So that's the skinny. The actually installation of the braces won't happen for another month or so, giving us time to brace ourselves for the financial impact. And it will be wonderful for Younger Daughter to have teeth that don't push out her cheeks in an uncomfortable fashion.
Posted by Patrice Lewis at 1:23 PM

Email ThisBlogThis!Share to TwitterShare to FacebookShare to Pinterest
Labels: braces