This past week has been crazy. Actually the past eight weeks have been crazy. That's because we've been working full-tilt at our home woodcraft business, shoveling pieces out the door to our booth at the Kansas City Renaissance Festival as fast as we can make them. Barely keeping up. Working twelve hour days, seven days a week. It's been especially hard on poor Don, since most of the shop work falls on him; but we've both been struggling since there's plenty of in-house work to do as well.

And as of today -- we're finished! Done! The last shipment is on its way to Kansas and we can RELAX!!

Yesterday the girls and I first- and second-coated the insides of the tankards. We usually do this in the kitchen with gooseneck lamps at our elbows so we can see every interior nook and cranny. 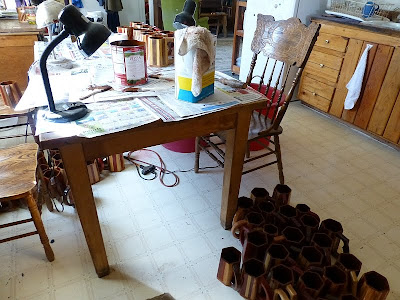 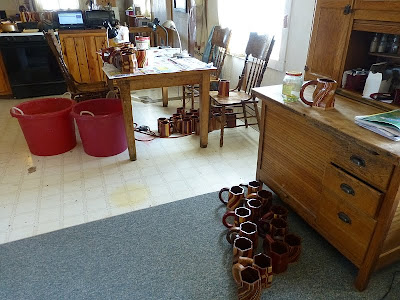 We let the pieces dry for a few hours... 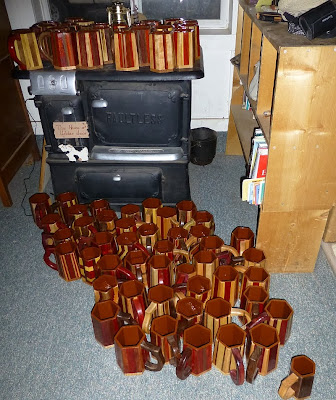 ...then tented them and put a space heater on them overnight to dry the lining more quickly. 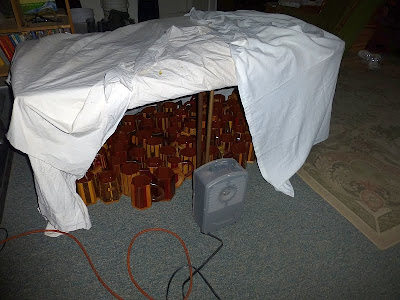 When the epoxy coating has fully dried, we force-cure the tankards in the oven for 1 1/2 hours, slowly increasing the temperature until it reaches about 200F maximum. 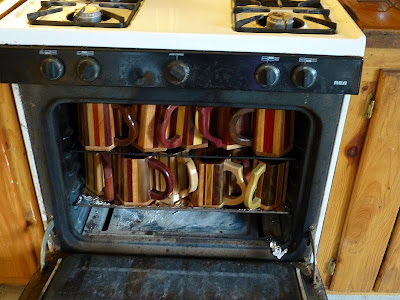 After they're done baking, we let them cool, then fill each one with water and set it on newspaper for about 30 minutes, to test for leaks. 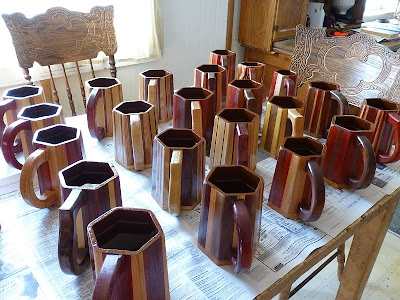 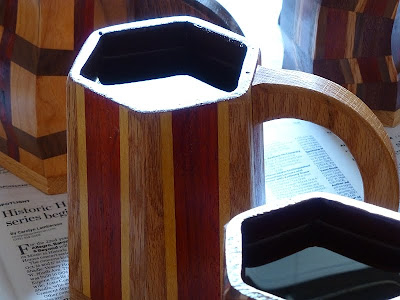 Each tankard gets its own guarantee card, which also identifies the woods. 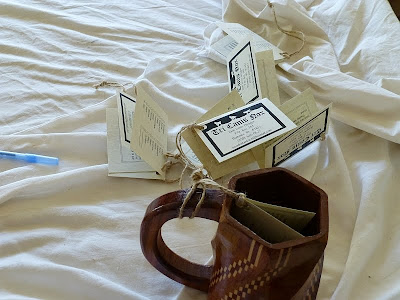 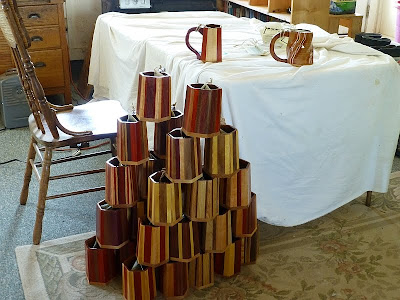 We buy bubble wrap by the bale. 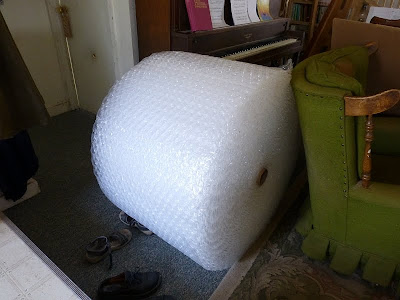 For this final shipment of the season, we had two boxes: one big, one not-so-big. 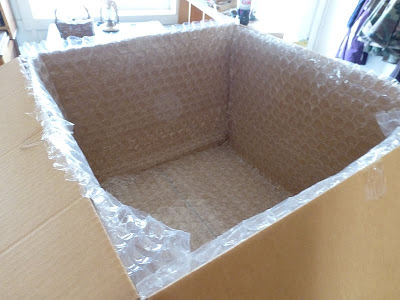 The bigger box held about 50 pieces, each individually wrapped in newspaper. 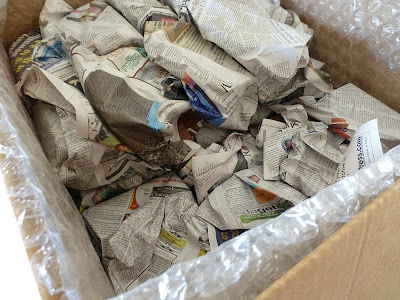 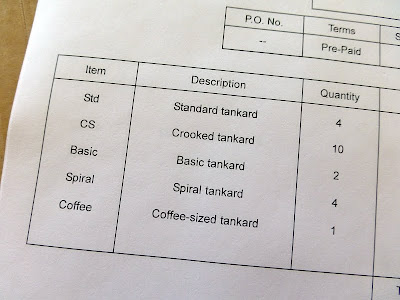 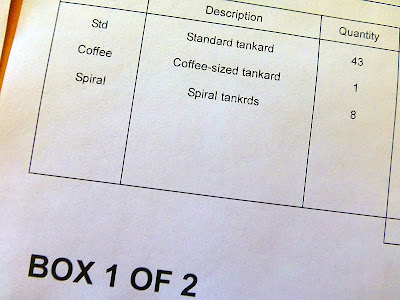 I had to run these boxes to Coeur d'Alene directly to FedEx. Big box in the back... 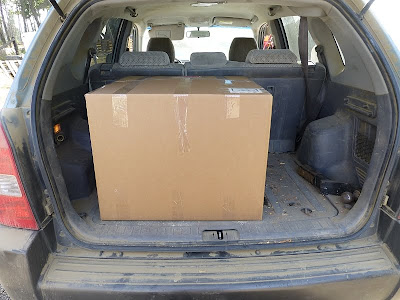 ...smaller box on the seat. 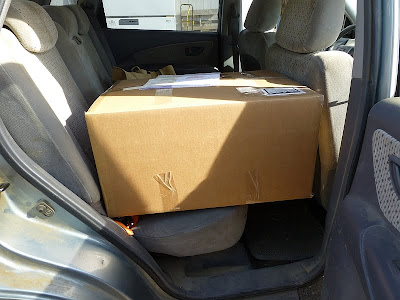 I was never so happy to see a FedEx building! 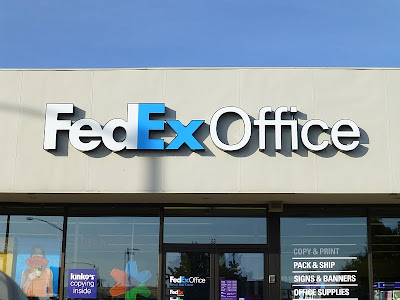 Once those boxes were shipped, I felt like dancing out the door! FREEDOMMMM!!! 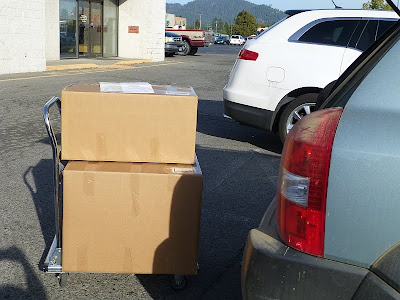 In the evening we celebrated our liberation by taking a hearty walk. Don and I are in dire need of exercise, and a family walk was just the thing. 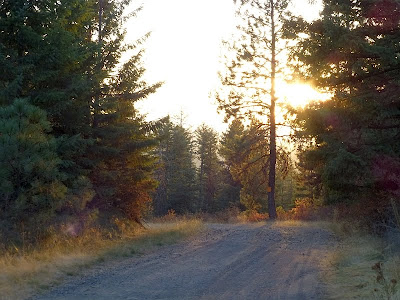 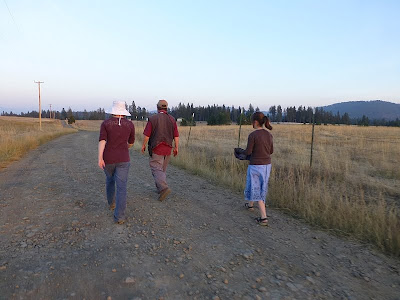 The sun sets on another busy season. It hasn't been spectacularly financial successful, but it was fine, and we're thankful. 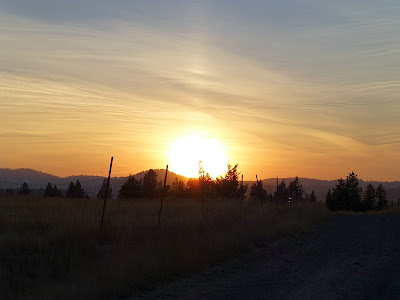 Now we can turn our attention to some desperately-needed tasks: fence repair, splitting firewood, finishing the bull pen, finishing the awning and feedboxes, general clean-up, and battening down the farm for the winter. 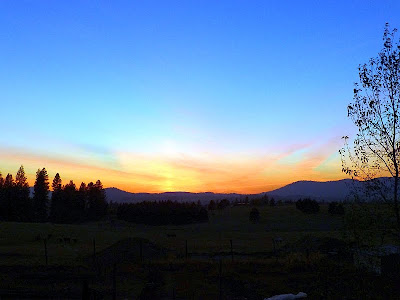 For those who are curious, we'll be putting up some tankards for retail sales within a few weeks. But let us recover first. We're exhausted and need to catch up on neglected chores before we can face the thought of doing yet another production run. 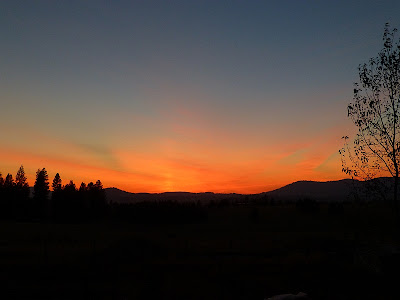 All together now: FREEDOMMMMM!!!!!
Posted by Patrice Lewis at 8:41 PM