I don't mean to turn this blog into a canning blog -- truly I don't -- it's just that I've been canning so much lately! The reason I decided to put up this latest post about canning mixed veggies is because it offers a sound and important canning principle.

A brief history: for awhile, we were one of the "clean up" families for our local Second Harvest distribution. Because of our geographical isolation, any leftover food from Second Harvest can't really be distributed elsewhere, so the minister in charge of distribution would call families that were interested in leftovers. He knew we were interested in preserving, so if there was any food left over, he'd call us.

Which is why, about two years ago, we came into possession of a twenty-pound box of mixed frozen vegetables. Twenty pounds of frozen veggies, it seems, was too much for most folks to handle, so we got it. I duly canned up the veggies and there they sat in the pantry, unused but preserved. Most of the time when we want a canned vegetable, we'll reach for a single type: peas, or beans, or corn, or whatever. But mixed veggies? Not so much.

Anyway, that's why I decided to get another box and can up some more mixed veggies. Our regional wholesale grocery (Cash and Carry) had the same twenty-pound boxes, so I bought one for $16.29. 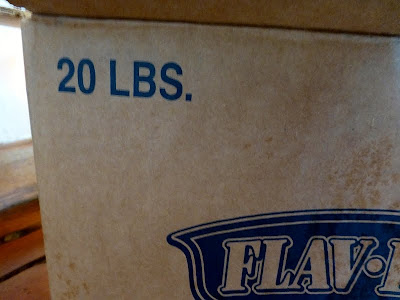 The box contains nothing but a single big bag, chock-ful of the vegetables. 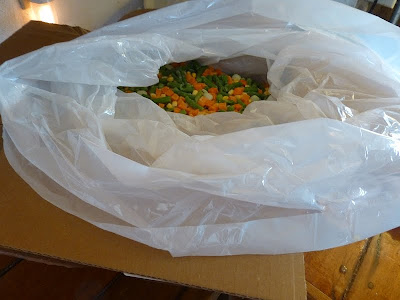 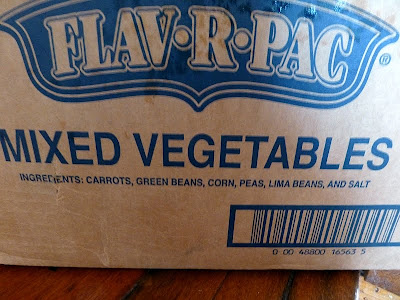 And here's the important canning principle I wanted to get across. When diverging from the beaten path in canning -- namely, when you're not canning in accordance with a pre-tested recipe -- then here's the rule of thumb: Process the food in accordance with the ingredient requiring the longest processing time. 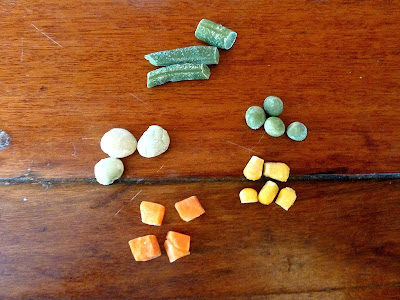 In this particular case, here are the processing times for each ingredient (10 lbs pressure at sea level) for pints:

Since corn is the ingredient requiring the longest processing time, I canned the veggies for 55 minutes.

It is recommended that vegetables be hot-packed, so I scooped about half the vegetables into a large pot (nested double-boiler style)... 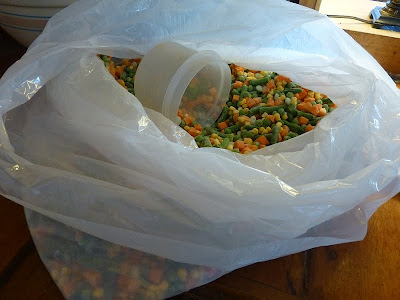 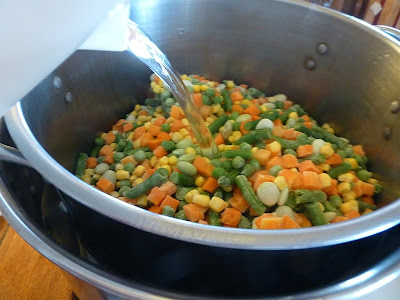 Then I filled the jars. My canner holds 18 pints at a time, so I only filled 18 jars. 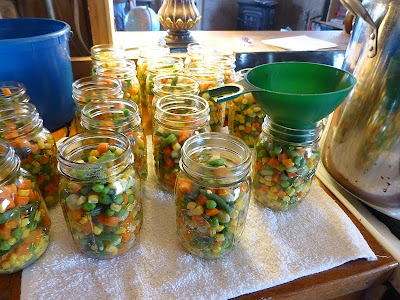 I added half a teaspoon of salt to each jar. 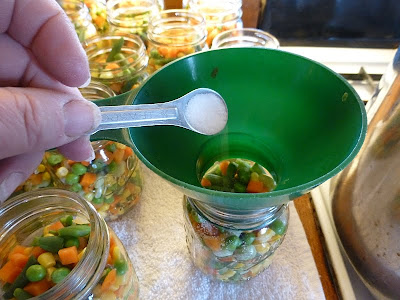 I could have filled the jars with the cook water, but since I had the second half of the vegetables to heat up, I used fresh boiling water instead. 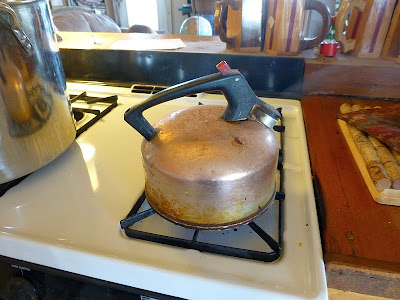 I always scald my Tattler lids. 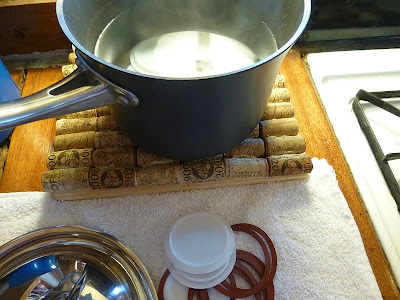 Wiping the rims. (This also allows me to check for nicks.) 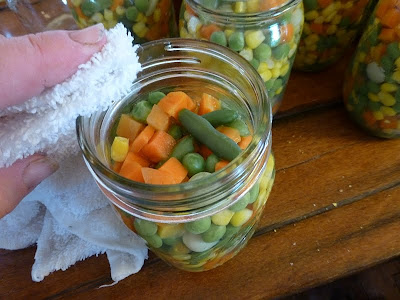 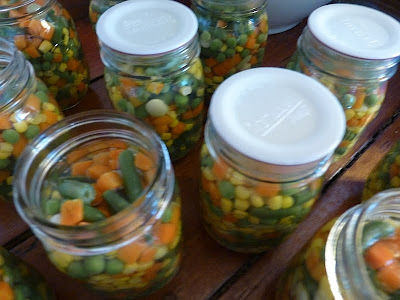 ...then rings, then it's into the canner. 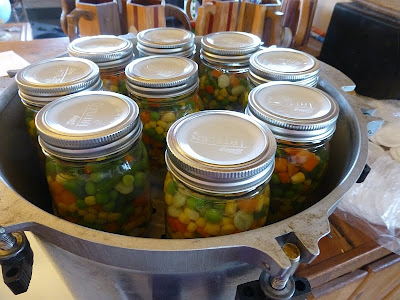 Adjusting for our elevation, I usually bring the canner to between twelve and thirteen pounds of pressure... 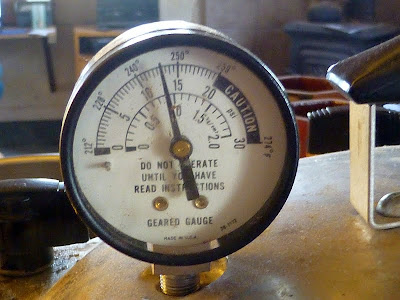 ...and held it there for 55 minutes. Remember, as I mentioned in my canning ebooks, kitchen timers are your best friends while canning! I use two: one for measuring the overall time of processing, and the other I keep clipped to my collar and it beeps every five minutes to remind me to check the pressure (and adjust the heat if necessary). 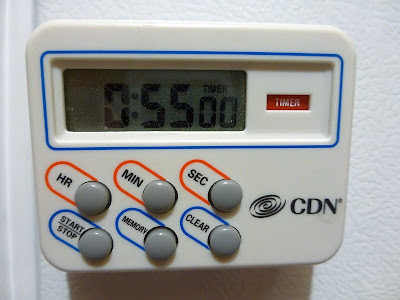 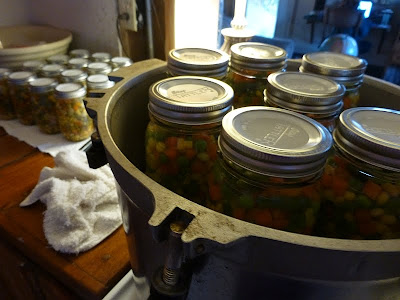 In all, I got 34 pints out of those twenty pounds of mixed veggies. 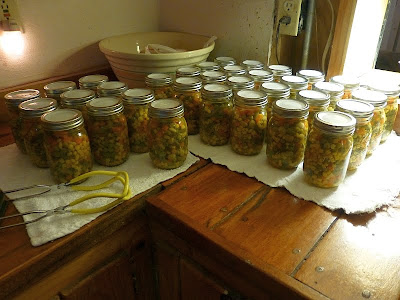 I made sure to scrub my rings before putting them away. 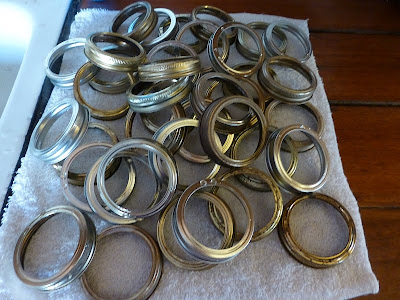 Then it was time for a well-deserved glass of wine. 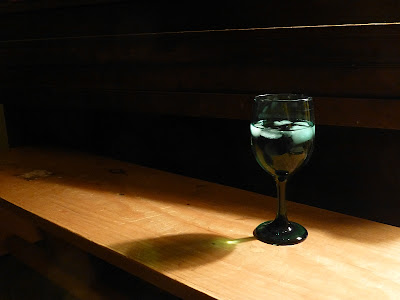 The box of mixed vegetables cost $16.29. Out of that box, I got 34 pints. This comes to $0.48/pint. While I haven't checked the price lately for a can of mixed veggies, I doubt I could have bought them much cheaper than that. 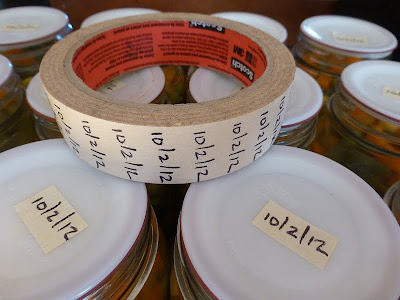 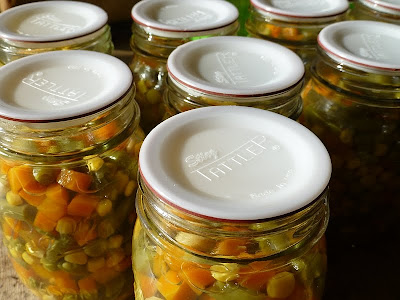 Posted by Patrice Lewis at 8:10 AM