It was our turn to host the Sunday neighborhood potluck. What to make? I decided on a deep dish chicken pot pie. 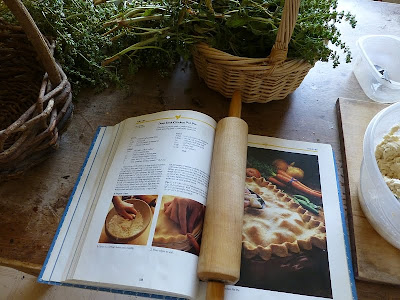 Although I made it the morning of the potluck, this pie can easily be made ahead of time and frozen until needed. (Often I'll make two and freeze one for later.) 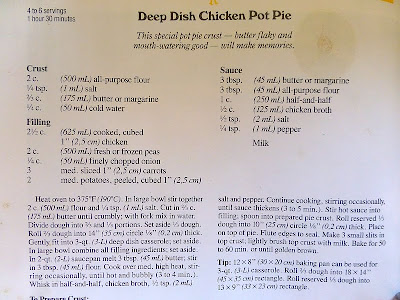 I start with the pie dough. I kind of "one-and-a-halfed" the dough recipe to make enough to fit into a larger dish. 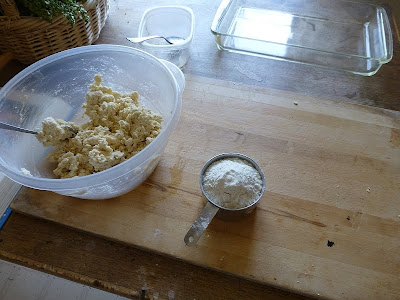 I wished I doubled it, as I had to roll the dough pretty thin. 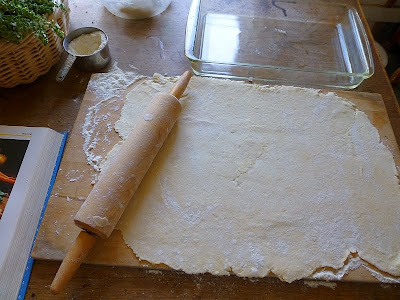 I always transfer pie dough from the cutting board to the dish by loosely rolling it onto the rolling pin... 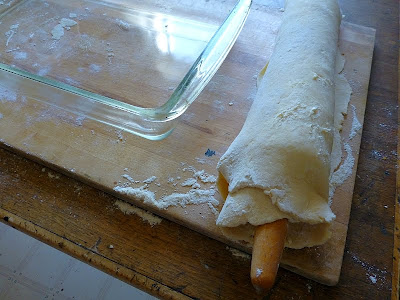 ...then unrolling it over the dish, ready to press down. 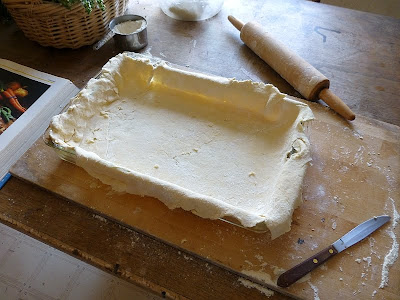 Next up: the sauce. It's a white sauce, starting with butter and flour... 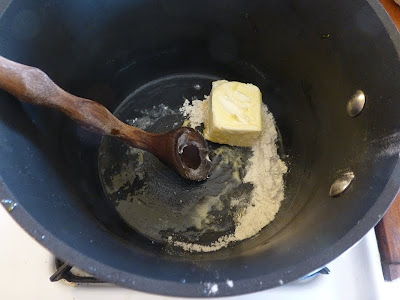 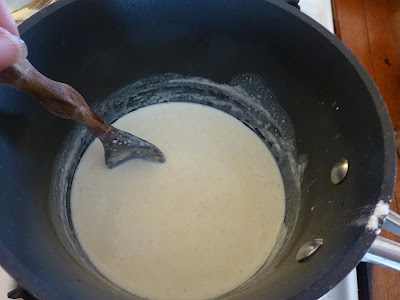 ...then chicken broth, salt, and pepper, and letting it thicken on low heat. 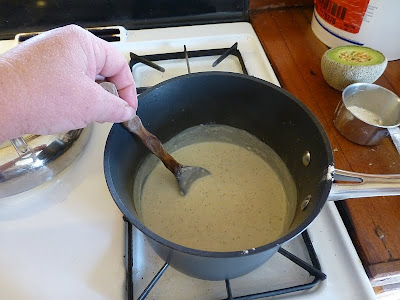 Next is the filling. Besides chicken, the recipe calls for carrots and peas. I cheated and used both canned chicken and canned mixed veggies. 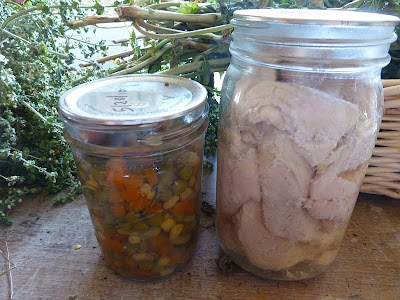 I like using canned chicken in chicken pot pies... 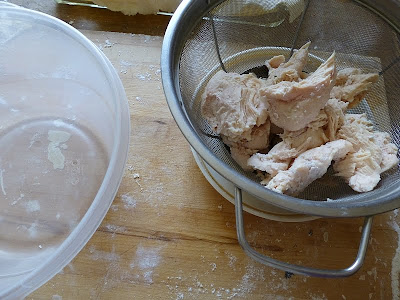 ...because it shreds so beautifully. 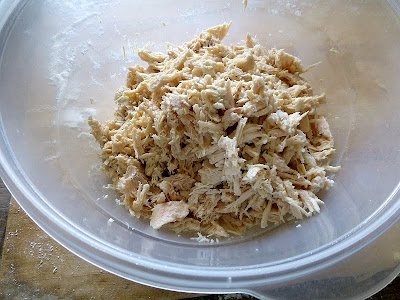 Once the veggies were drained and added, I diced a potato and an onion... 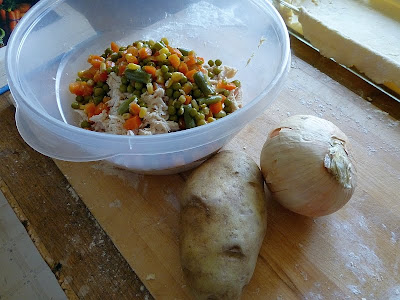 ...and added them to the mixture. 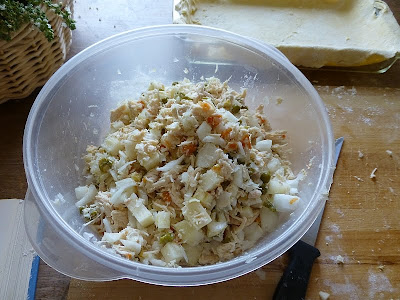 Then I added the sauce... 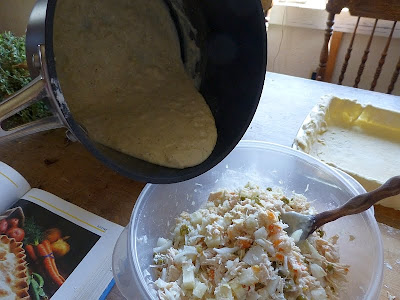 ...gave it a good mixing, and scooped it into the pie crust. 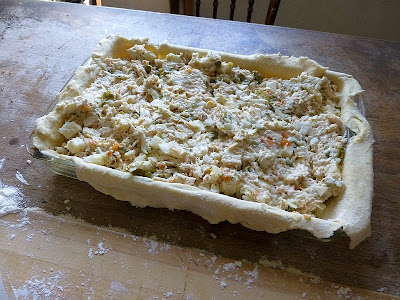 I rolled out the pie top and unrolled it over the top of the dish. 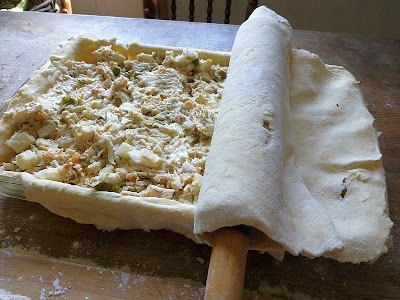 Pinched the edges, pricked a few holes, and it was done. 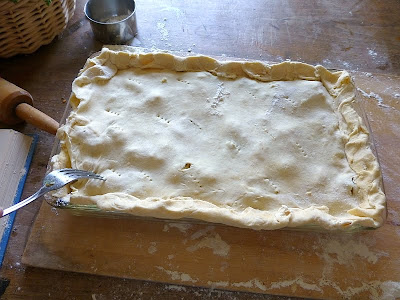 Into the fridge, since dinner was not for several hours. 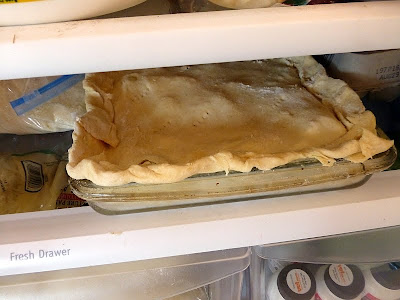 I preheated the oven to 375F. Just before baking, I brushed the top with milk. I usually foil the edges too, to keep them from browning too fast. I just bake until it's brown, about 30 to 45 minutes. 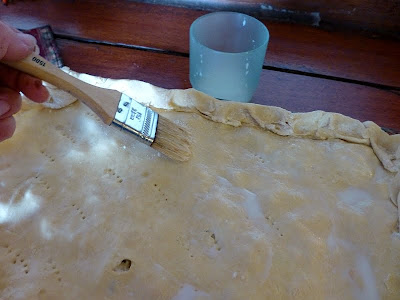 I meant to take a photo of the pie when it was finished, but frankly it disappeared too fast. This was all that was left by the end of the evening. 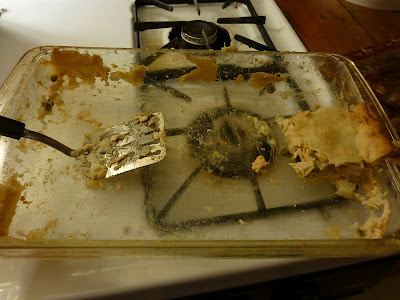 Because it was a self-contained meal, cleanup was easy. My kind of potluck dish!
Posted by Patrice Lewis at 10:47 PM