I received a snark a few days ago, and have been debating about whether to post it or not. I’ve decided to compromise and post parts of it.

First, a little background. Way back when I was in high school, I decided I wanted to be a field biologist, a second Jane Goodall. I burned with the desire to study animals in their natural habitats, to live a rugged outdoor life. To that effect, I knew I couldn’t be a high-maintenance kind of woman.

This attitude continued through college, through summers working in the field, and even into my post-college years working in office buildings. In fact, that early training has never really left me, which perhaps accounts for my satisfaction to live an unglamorous life shoveling manure and milking cows on a farm.

But clearly not everyone feels the same way. We all know someone (usually a woman) who is high-maintenance, whose raven locks can only be touched with organic grape-leaf and wild-hemp shampoo costing $15 a bottle.

Well, that’s the kind per woman who just sent the snark, who was “absolutely disgusted” with my attitude on fashion. “For some one with no interest in fashion you seem to spend a lot of time mocking those who enjoy doing their hair and makeup and dressing in nice clothes,” she wrote. “I am the type of girl who spends thousands of dollars on handbags and shoes, I have no interest in living in the country or farming.” [Which begs the question, why are you hanging around a blog that focuses on living in the country and farming? Just asking.]

“I find your clothes in the pictures you have on your blog to be embarrassing and ridiculous,” she adds, “but I would never make a post on my blog showing shoes you like that I find ugly and proceeding to mock them. If you don't like how someone dressed that’s your problem, not theirs.” She concludes by saying, “Please consider that before you try to shame another person into conforming to your world view. Now I'm going to take my own advice and find a new blog to read that contains a little less arrogance.” 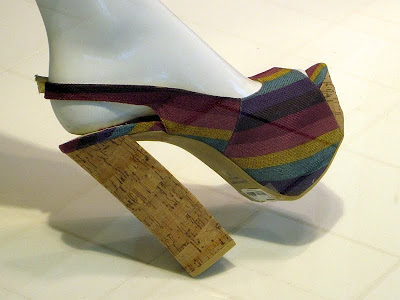 My first thought upon reading her email was, Good riddance to bad rubbish. But then I had a second thought: maybe she’s a little bit right.

You see, I regard high-maintenance women with genuine puzzlement. Unless you’re wealthy, anyone who spends “thousands of dollars on handbags and shoes” instead of sensible things like paying off debt or paying down the principle on your mortgage or even buying some storable food just makes me shake my head in wonderment. I truly don’t get it.

And what will happen to people like this if the bleep hits the fan? What good are their “thousands of dollars” worth of handbags and shoes then?

Yet the fashion industry is unquestionably massive. As I wrote in an earlier post, "I suppose I can't get down too hard on fashion and makeup sites. There's nothing illegal or immoral about them. They feed huge international industries that employ millions. And women have taken an interest in fashion and makeup since the dawn of civilization, so my sour grapes doesn't change that historical fact. I guess my concern is when women become so obsessed with the shallow to the exclusion of the serious, it makes me concerned that they won't be able to handle anything BUT the shallow. On the other hand, I suppose I shouldn't worry. Scarlet O'Hara started shallow and look how she pulled off handling a war."

So for those whom I’ve offended because of arrogance for my views on fashion, I tender my apologies. But I’m not gonna stop poking fun. If that will continue to offend, then you may prefer to read one of the many different blogs on the internet that focuses on fashion.
Posted by Patrice Lewis at 7:18 AM