The decline of reading

Here's a couple of articles which caught my eye recently.

The first article, entitled Should English departments throw in the towel?, opens with the following startling statement: "It’s not that Johnny can’t read. It’s just that he doesn’t want to - at least not any more than necessary. And is that such a crime?" This is the premise of a paper submitted by a professor of English named Alan Jacobs to an academic trade journal called The Chronicle of Higher Education.

Far from being facetious, Mr. Jacobs is making a serious argument that literacy is necessary, but reading for pleasure may not be. He argues that to try and forcefully infuse someone with a love of reading just doesn't work. Those that want to read, will read. Those that don't, won't.

Despite his occupation in academia, he clucks his tongue at literary snobs who baste themselves in "superior virtue" because of their lofty taste in literature, versus the poor common slobs who prefer to read popular fiction (if they read at all). Rather defiantly, Mr. Jacobs refuses to treat this as a crisis and urges the academic environment to simply adjust -- even to the extent of cutting English Departments.

Sad as that makes me, I guess I can't argue with him in one respect: You can't force someone to love anything. And electronic media, you must admit, is seductively attractive. Books are just so, well, passé.

It's just that I couldn't fathom life without books. A great many of them. 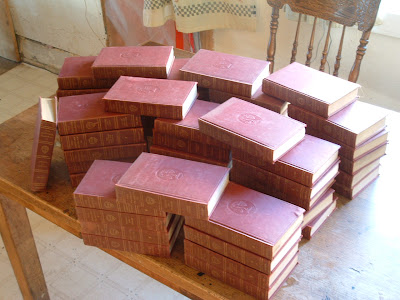 Hard on the heels of this essay, we learn that the esteemed Encyclopaedia Britannica -- facing the realities of the digital age -- is ceasing publication of the print version of its encyclopedias (after 244 years!) in favor of online versions.

"The Britannica," notes the article, "the oldest continuously published encyclopedia in the English language, has become a luxury item with a $1,395 price tag. It is frequently bought by embassies, libraries and research institutions, and by well-educated, upscale consumers who felt an attachment to the set of bound volumes. Only 8,000 sets of the 2010 edition have been sold, and the remaining 4,000 have been stored in a warehouse until they are bought."

I confess, I covet one of those 4000 remaining sets. But we'll make do with our 1990 set of World Book Encyclopedias, purchased for $1/volume when our old Oregon library upgraded to newer versions. Recently I asked our local Idaho library -- which has a crisp and practically unopened set of World Book Encyclopedias sitting untouched on its shelves -- when they plan to upgrade to newer encyclopedias (with an eye toward purchasing their older set). Answer: they won't be.

A chilling quote from the article on Encyclopaedia Britannica cited a reference library in Maine who said, "General-interest encyclopedias are often used by students whose teachers require them to occasionally cite print sources, just to practice using print."

To practice using print... my fingers falter as I type those ghastly words (on my electronic keyboard, not with quill and ink on paper). I guess we have to accept the fact that things change and reading is on the decline.

Meanwhile last week we made it into Coeur d'Alene, where the girls clamored for a trip to the Cd'A Public Library, a beautiful new facility that opened a few years ago. 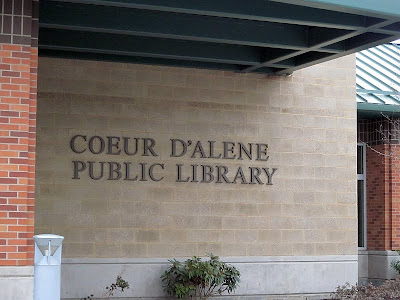 Here they spent an hour browsing and came away with about 25 books, by no means an unusual occurrence. 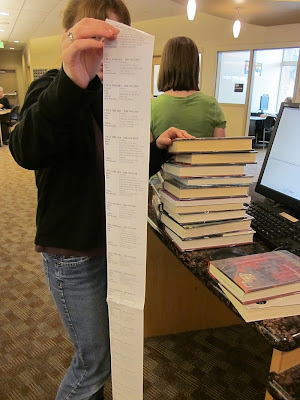 I suppose if we've done nothing else as homeschooling parents, we've managed to infuse our children with an absolute joy for reading and a passion for books (the printed kind). And I for one am delighted with their old-fashioned taste.

Posted by Patrice Lewis at 9:09 PM