Up to this point we've had a mild -- an unbelievably mild -- winter. Couple inches of snow, max. Most of the time we've had bare ground.

Looks like that's all about to change. See those giant pink-and-blue splotches all over the Pacific northwest? That's us. 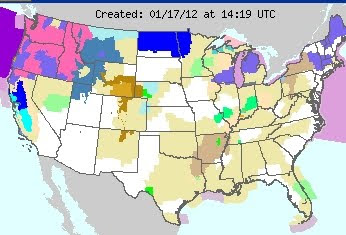 Right now it's howling wind outside, but with only a light dusting of snow. But more is forecast. As in, a lot more.

Granted weather reports have been wrong before, but of course we can't take chances. The forecasts are calling for as much as two feet of snow. Couple that with wind, and we'll have drifts that could be chest high or higher.

And since we're two miles off-road, meaning the county doesn't plow, our road WILL be drifted shut. That's just a fact of life around here, and we expect this to happen two or three times every winter. 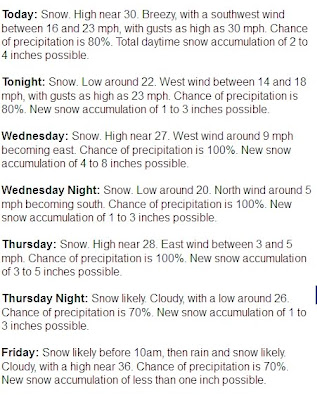 We were supposed to have our steer Nebuchadnezzar butchered tomorrow, but I think we can comfortably assume the mobile butchers won't be able to get anywhere near our place. So Nebuchadnezzar gets a temporary reprieve. 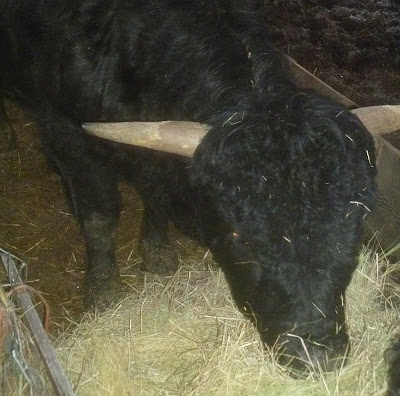 Normally Tuesday (today) is our "city day." The girls both have lessons (music and gymnastics) in the city, and it's a chance for me to do errands, etc. But it also means we don't get back until after dark, and the Palouse Highway is famous for being virtually obliterated during snowy and windy conditions.

I have no desire to become a statistic, especially with the kids in the car, so we're staying firmly PUT this week!

I'll take lots of photos as this storm unfolds...
Posted by Patrice Lewis at 6:42 AM