Some of you may remember our wheat-growing experiment from a few years ago. 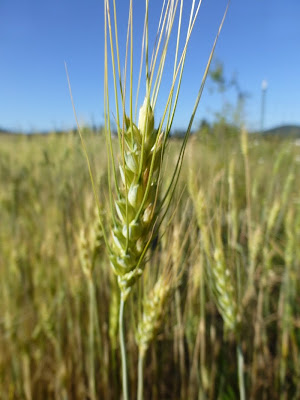 North Idaho is wheat country. Take a short drive anywhere beyond our property, and you’ll see vast swathes of cultivated Palouse prairie. In late summer, massive million-dollar combines rumble across the fields, cutting wheat at a precise height, vacuuming up the grain heads, threshing it, and spitting out the clean wheat from one side and the chaff from the other. These machines are awesomely efficient. Whenever you buy flour at the store, or consume pastry or bread products, you can thank the thousands of hardworking farmers who grow wheat for our country. 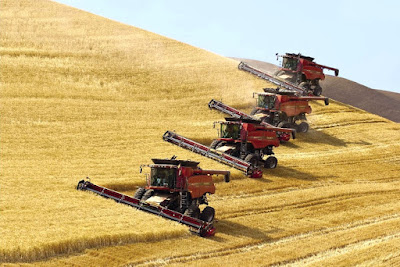 But what about growing wheat on the individual level? That was what our wheat-growing experiment was all about. Was it do-able from the standpoint of a small homestead? How hard would it be?

We set out to learn.

The first time we grew wheat, we plowed the field once in the fall, then sowed hard red winter wheat. This wheat sprouts in autumn, goes dormant over the winter, and grows again in the spring, then is harvested in late summer. It worked great except for one thing: we couldn’t control the weeds, notably cheatgrass. It’s not like we could plow the weeds under while the wheat was growing. We ended up growing half wheat, half weeds. The experiment was a failure. 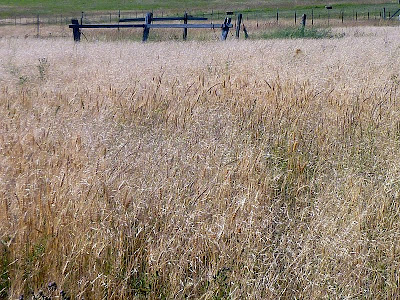 So we switched to hard red spring wheat which, as the name implies, is planted in the spring. We plowed the field three times before planting: once early in the spring, a second time to kill any weeds that returned, and a third time to kill any more stubborn weeds that returned yet again. This crop of wheat was much more successful. (We may try winter wheat again after several years of weed control through cultivation.) 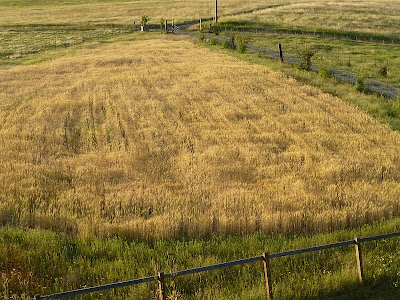 With the exception of plowing the field, everything else was done by hand. We sowed. We scythed. We raked. We bundled.

And we threshed. Or at least, we tried. 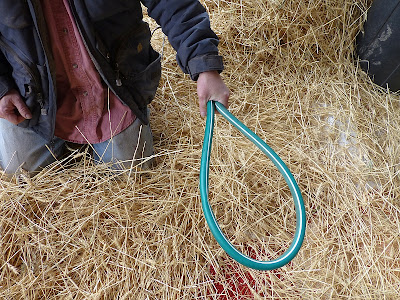 While the whole wheat-growing venture was challenging but otherwise fine (and repeatable), it was the threshing that did us in. Threshing wheat by hand, using flails, is inefficient, wasteful, physically difficult, and wildly time-consuming. In this respect, the experiment was, once more, a failure. Grrr. 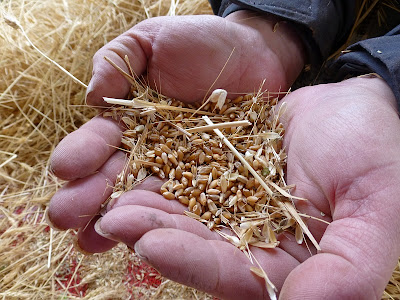 One of the ongoing things we’re trying to do on our homestead is to figure out what works and what doesn’t when it comes to self-sufficiency. Wheat is an integral part of most Americans’ diets, yet threshing stymied us. We needed to find out how to grow wheat with the less-sophisticated hand-powered methods suitable to a small homestead.

We spent a lot of time wondering what a small family farm could use in place of massive combines. After a fair bit of research, as well as some suggestions from blog readers, we came across a treadle-powered wheat thresher:

So, in an attempt to continue our research, we decided to purchase this thresher and conduct a product review regarding its efficiency. How well does it work? What are its drawbacks? How efficient is it? How difficult is it to use? Can it thresh enough wheat to feed a family from year to year?

These are some of the questions we hope to answer. Backwoods Home Magazine has already expressed an interest in an upcoming article on the subject, and I suspect a number of other magazines would be interested as well.

The thresher we purchased came from a place called Back to the Land Store in Tennessee (which closed its retail location shortly thereafter and has plans to open an online-only store). The gentleman I spoke to told me the machines are hand-made by an Amish family living nearby. He said it will thresh about 1.5 lbs. of wheat per minute (at top speed); and the drier the wheat, the better it threshes. The cost of the machine as well as shipping it to Idaho came to around $1200, so it was not a purchase to undertake lightly and it took us awhile to save up for it.

The thresher was shipped in mid-November and arrived without incident. Right now it is being stored in the barn until we have a chance to put it to use next August. 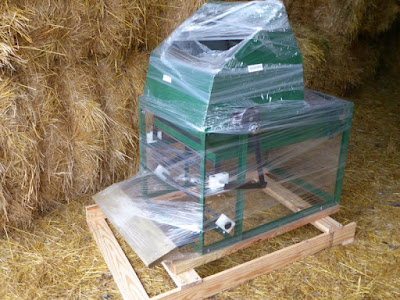 Come May, we’ll re-plow the same field we used before. We’ll repeat the triple-plowing to control weeds. We have seed wheat ready to plant. We have scythes ready to sharpen. Now we have a thresher ready to thresh.

Stand by for a product review!
Posted by Patrice Lewis at 11:38 AM