A couple of weeks ago, I noticed a dead chicken in the driveway area. This isn't an unknown situation -- once in awhile, a bird just seems to keel over for whatever reason -- so I made ready to pick her up and put her in the trash.

Except she had no head. And no neck. It was just a headless, neckless carcass lying there.

Even more unusual, there was no blood and no feathers.

Don and I were stumped. What kind of predator would take the head and neck, but leave the body? And why was there no sign of a struggle -- scattered feathers, etc. -- anywhere nearby?

We concluded it must have been a hawk or something that swooped down, snatched the chicken by the head, and then the body fell off mid-air. Didn't seem overly likely, but we had no other explanation.

Fast forward about a week. We were doing some cleanup in the driveway area before some anticipated snow moved in. Among our tasks was to remove a large tarp that was jammed near a unit of 2x6s. We pulled the tarp flat, folded it up, and put it away.

A short time later, a flash of white caught my eye. I turned and gaped: it was a weasel, skirting the edge of the driveway area -- from the pile of 2x6s, across the length of the barn, over the compost pile, and ... underneath the new chicken coop expansion Don recently finished.

The weasel was carrying something in its mouth, probably a mouse. It dashed under the chicken coop. I was disappointed because I couldn't get any photos, it was moving so fast.

Then it emerged from under the coop, mouseless. This time I had my camera ready. 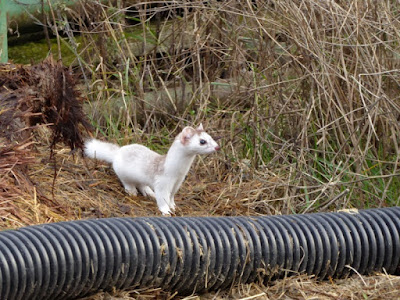 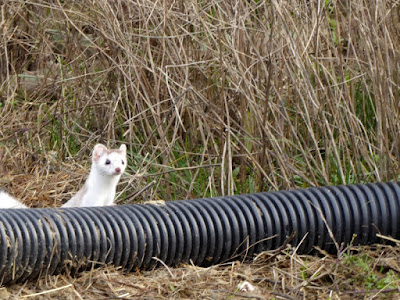 Half the photos I took were blurs, or showed the tiny creature in a full-out dash. He traced his path back around the perimeter of the driveway area, toward the pile of 2x6s. 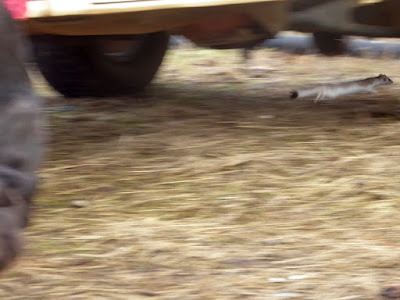 The chickens cackled with alarm as the weasel moved among them, but they dwarfed him in size so I wasn't worried. 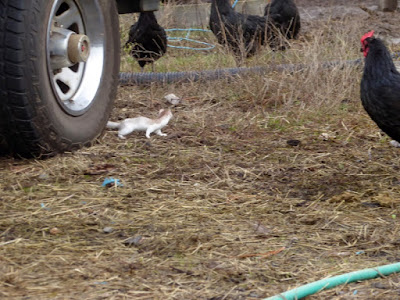 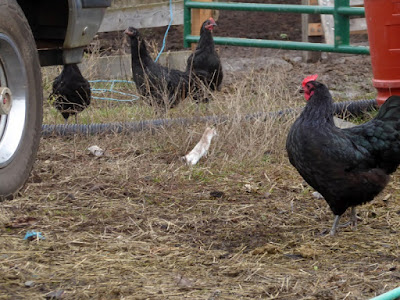 He moved across the front of the barn, on his way back to the stack of 2x6s. Evidently we had disturbed his home when we moved the tarp, and he felt compelled to move to a new location ... underneath the chicken coop. 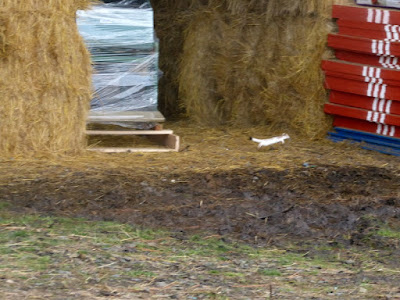 Here he is, momentarily stopping behind a unit of OSB we have in the barn... 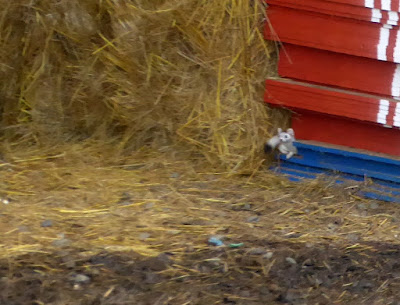 ...and dashing out once again. 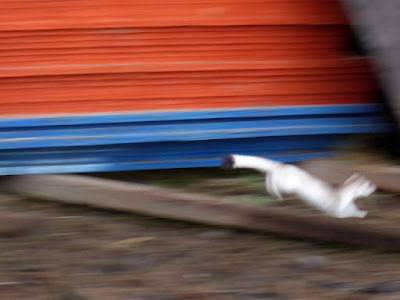 He soon returned, this time carrying something even larger in his mouth: a vole. Clearly he was moving his cache of reserved dinners to his new home ... under the chicken coop. 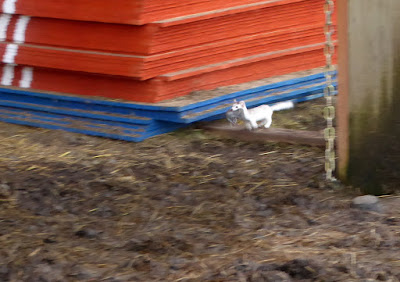 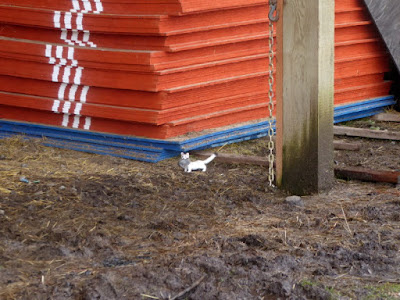 He conveniently paused and let me snatch some clearer shots of him. 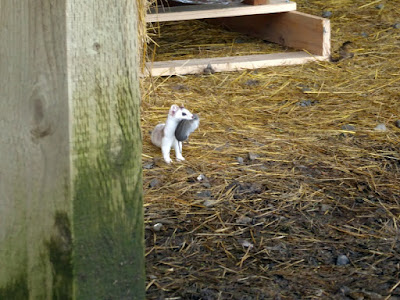 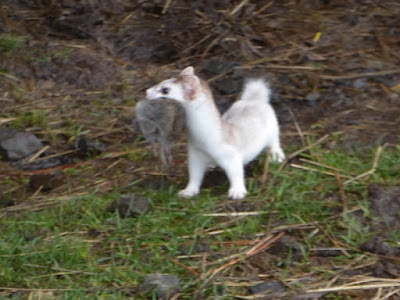 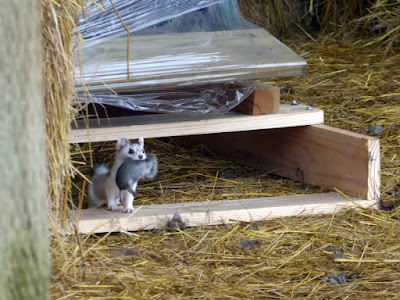 Then he dashed off again, carrying the vole to his new home ... under the chicken coop. 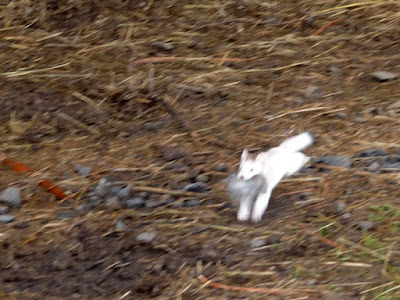 He put the vole under the coop, then peaked out at the corner. 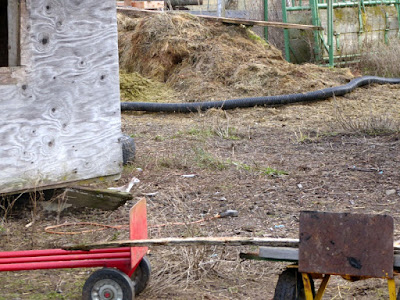 Then he made another dash past the chickens, circling the driveway once more. 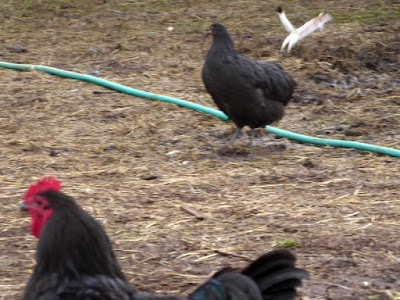 At first we were enchanted by this new visitor. I mean, he's so cuuuuute! Couldn't you just pinch his little cheek? 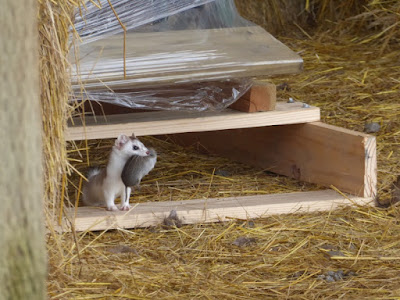 The fact that he was apparently taking up housekeeping directly under the chicken coop concerned us a bit since we have three young chicks from our "October surprise," which would fall easy prey to a predator. However we weren't unduly alarmed by the weasel's presence, even if he was ... right underneath the coop.

That is, until we mentioned the weasel to a more knowledgeable neighbor. Immediately this neighbor started clanging alarm bells and telling horror stories about the devastation weasels can wreak on chicken flocks.

A small amount of internet research confirmed his fears. I knew weasels were voracious predators, but never realized they would attack something as comparatively large as a chicken. 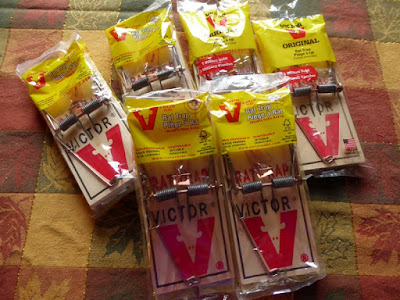 Then he constructed boxes with a sliding lid, large enough to fit two traps. 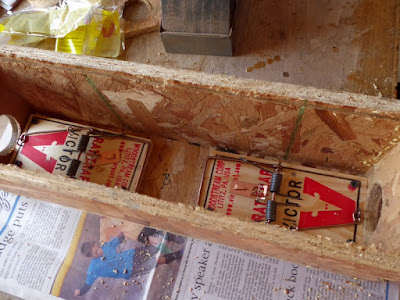 The boxes have holes at either end. Apparently weasels won't enter a box unless they can see an escape route on the other side. The purpose of the box, incidentally, is to prevent the rat traps from catching a curious chicken. 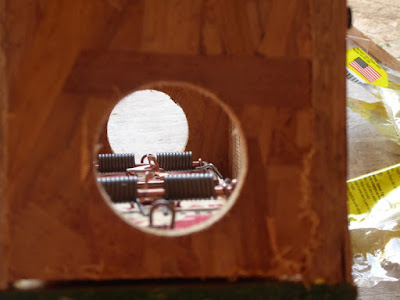 When the boxes were complete... 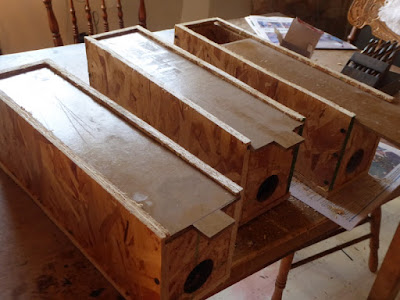 ...we baited them with bits of meat. 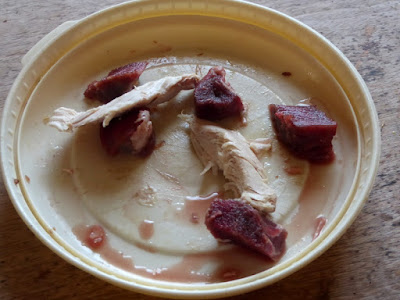 We placed the traps in three strategic locations, including inside the chicken coop expansion. 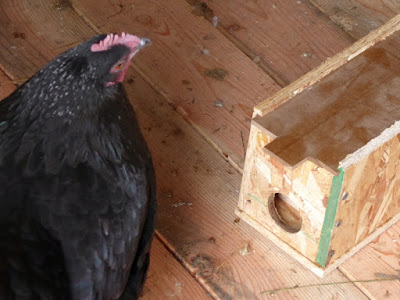 So did we catch the weasel? No. We saw it dashing hither and yon for a couple more days, but we've seen nothing for the past two weeks. Maybe the little predator decided the area was teeming with too much activity, and departed for quieter hunting grounds.

So was the weasel responsible for our mysterious headless chicken? I have no idea. It seems impossible for such a small creature -- even a fierce predator, like a weasel -- to have the sheer strength necessary to rip a head and neck from a chicken's body.

But we'll never know. Meantime, we'll keep those traps handy. We might need them again.
Posted by Patrice Lewis at 6:59 PM