Time for our Friday Roundup, where we post what things we've accomplished (big or small) during the week that moves us incrementally toward being better prepared.

It's Friday night as I begin this post, and Saturday morning as I finish it. In fact, it's a long post, so bear with me as I summarize our week's activities.

Unlike a couple weeks ago when we accomplished precisely nothing, this week has been tremendously productive. Isn't it funny how some weeks are like that?

At any rate, here's our activities for the week:

• We had a new calf born to Rosy, a little girl. She looks so much like her mother that I've named her Minnie, as in Mini-Me (remember Austin Powers?). 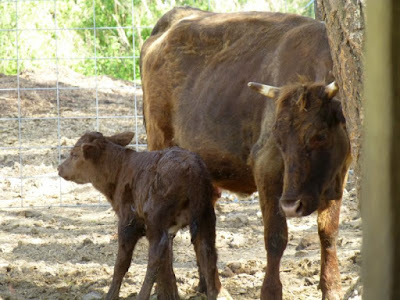 I got photos of the birth from start to finish, so I'll put them up later as a separate blog post.

• We got a huge amount of work done in the garden. Here are last year's "viney tires" (where I grew sprawling things like melons, cucumbers, etc.). The tires were still weed-infested from the winter. Don and I weeded them clean and planted tomatoes rather than vines. 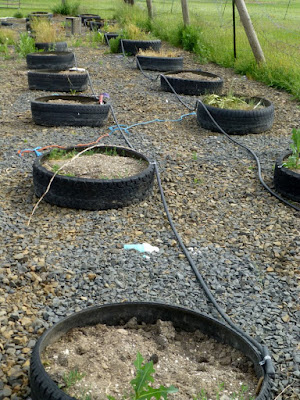 This year I (cough) cheated and bought seedlings from a local woman. 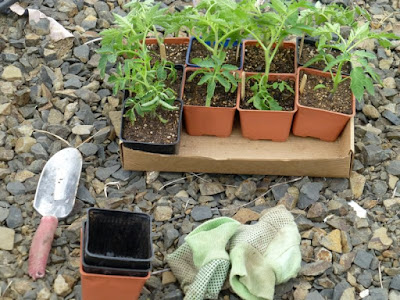 I planted one per tire... 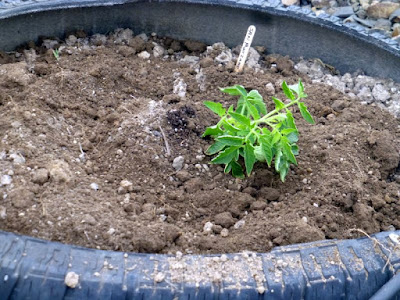 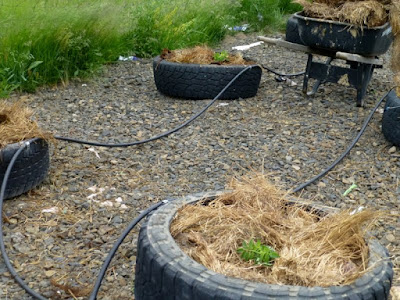 • We dehorned little Adina, who was born last week. 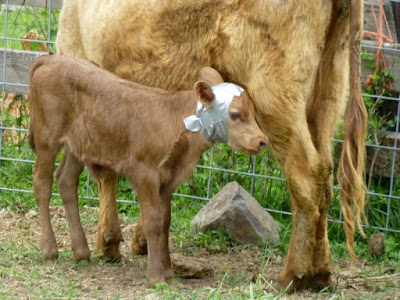 Then we returned Dusty and Dina to the rest of the herd. 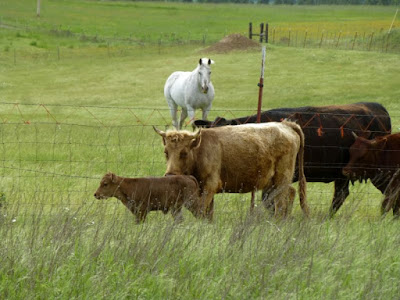 • The strawberries are just starting to ripen, so we've been picking. We're not yet getting the great gushing quantities we'll get in two weeks or so, and for the moment we're all greedily hungry for fresh ripe strawberries, so we're eating them as fast as we pick them. Delicious bliss. 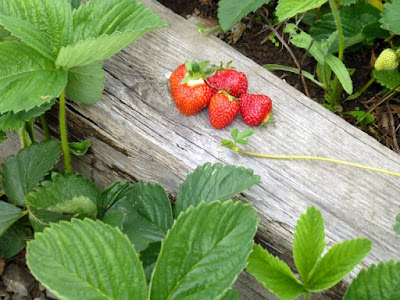 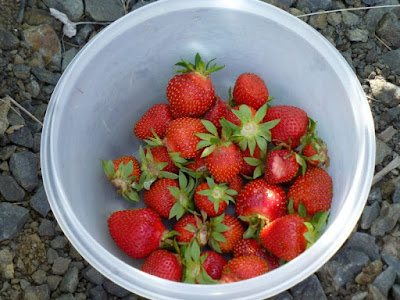 • I finally got around to mulching the new blueberries. 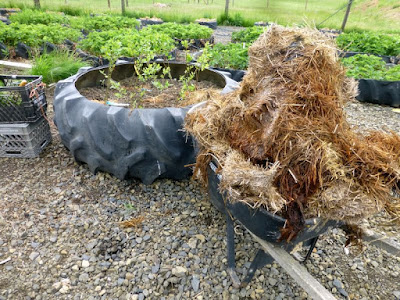 The young plants are doing beautifully and some even have a few unripe blueberries on them. 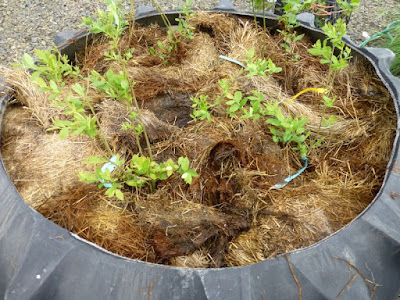 • I'm still doing a lot of weeding, gradually working my way through all the tires to prep them for planting. 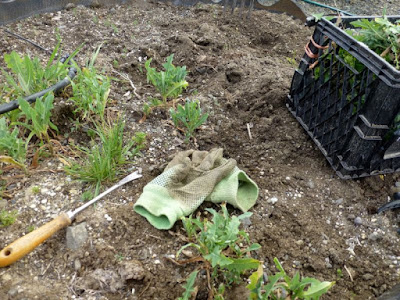 I came across this large mother wolf spider, her back furry with tiny babies. 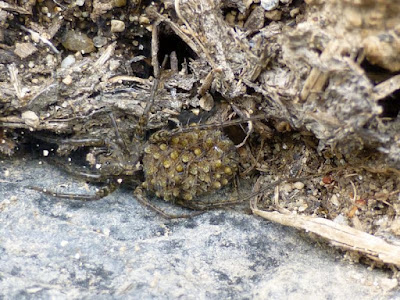 I scooped her up and tossed her outside the garden so I wouldn't accidentally bury her in dirt as I pulled weeds.

Gradually the garden is taking shape. 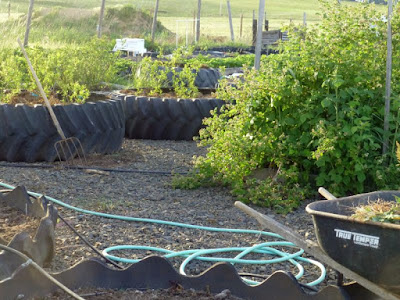 • We (mostly Don) got the drip irrigation hoses reinstalled in the tires... 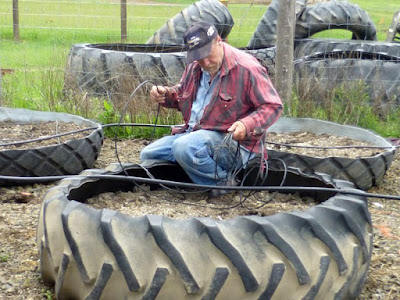 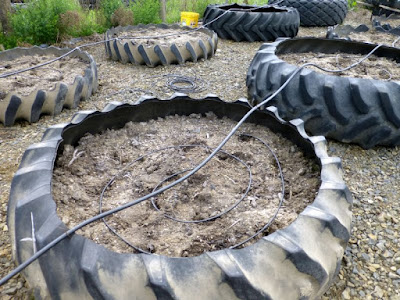 ...and tested the system. 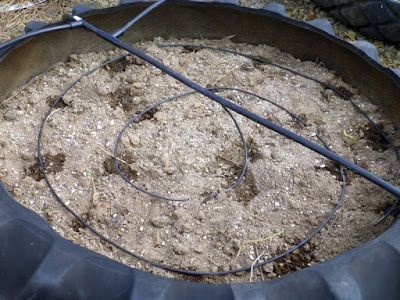 • I got out all the seed potatoes I've been saving all winter and got 16 tires' worth planted (about 320 or so). Because I had so many, I didn't bother cutting them up into pieces with one eye per piece. 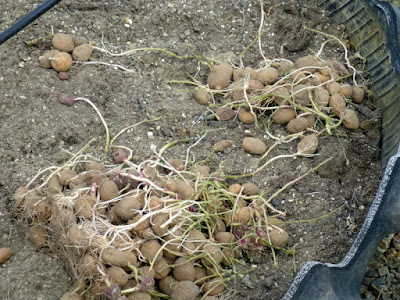 This strange sight (I called it the "Medusa crate") is our one remaining crate of potatoes harvested from last fall. These were stored in the darkest, coolest part of the house, which the potatoes evidently took as a sign to sprout like crazy. Obviously we need a root cellar for optimal storage, which we don't have. 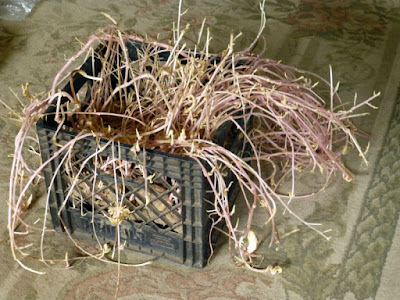 While they're too soft for eating, they're perfect for planting. Since I didn't need any more seed potatoes, I gave these to a neighbor who is just getting around to planting his garden. 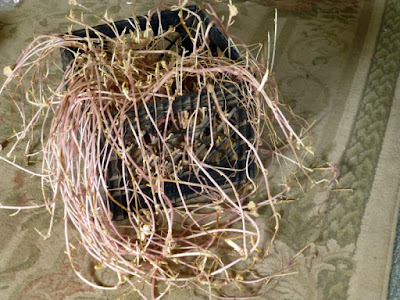 • Don brought me up loads of compost from last year's awning-cleaning and dumped it on a tarp in the garden for easy access. 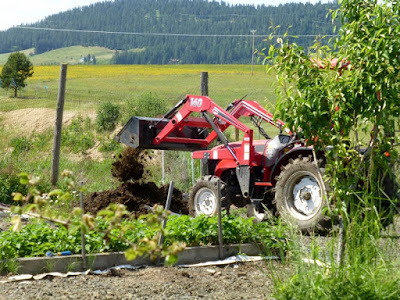 • I got some of the compost moved onto the corn tires. 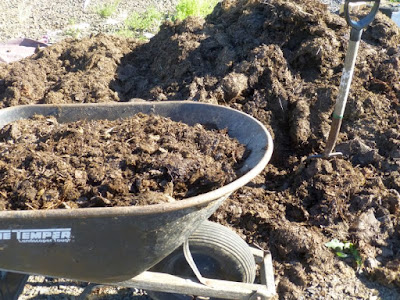 Corn is a heavy feeder, so I put two wheelbarrows' worth of compost on each tire and worked it into the soil. 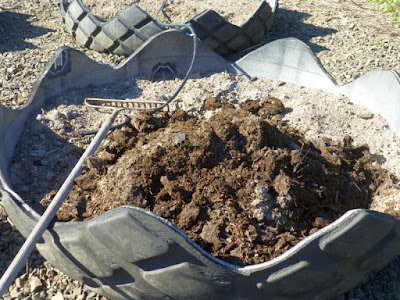 You can see the contrast between composted and un-composted tires. 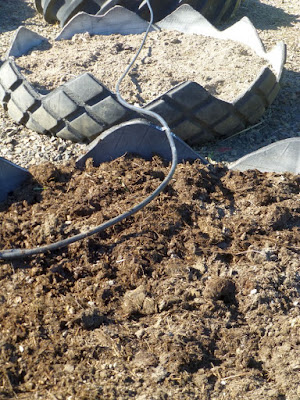 I only got three (out of twenty) tires done, so I'll continue working on that this week. 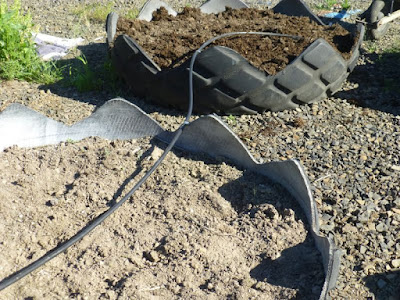 • Don got the drip system laid out in the potato onions (planted last fall)... 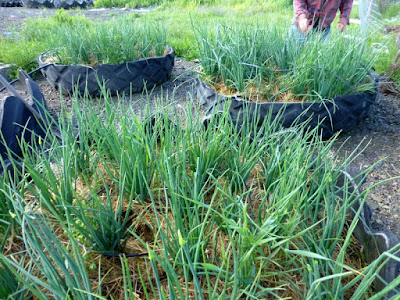 ...as well as the five other tires I had planned for carrots. 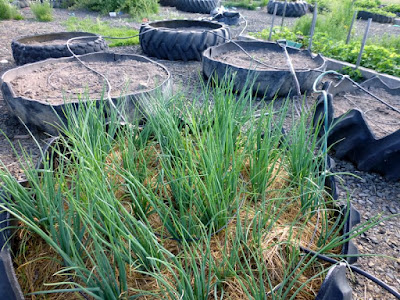 • Yesterday afternoon I got all the carrots planted, about 400 seeds (hopefully they'll all grow). 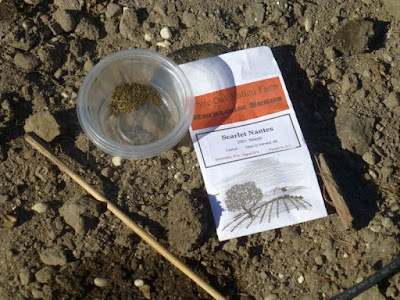 • Don started on a long-overdue project, removing some ratty falling-down fencing in order to replace it with sound, well-built fencing. It's an ongoing project but he got an excellent start. 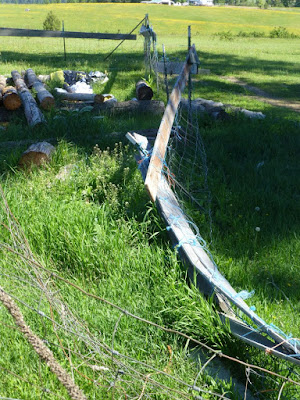 Now it's your turn. What did you accomplish this week?
Posted by Patrice Lewis at 10:14 AM