Seems like the days fly past since once again it's time for our Friday Roundup, where we all pitch in the things we did during the week -- big or small -- that contributed toward self-sufficiency.

We've had a productive week, even working through an early and nasty heat wave (highs in the low 90s, ug). Here's what we got done this week:

• Our cow Victoria (the dark red animal) had her calf out in the pasture, a little bull (here Polly is sniffing at him). 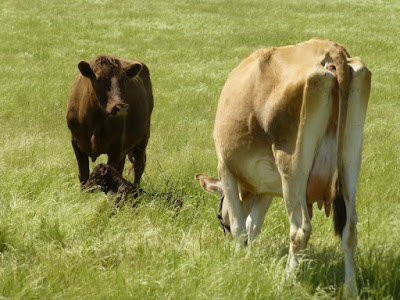 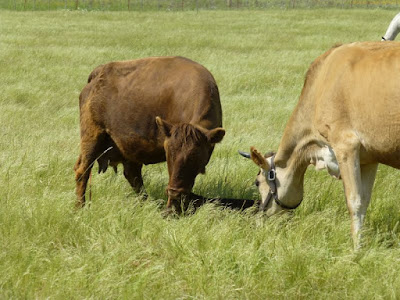 Victoria is an experienced mama so I wasn't worried. We'll have to capture the little guy and castrate in a few days. Meanwhile Younger Daughter named him Jerky. As in beef. 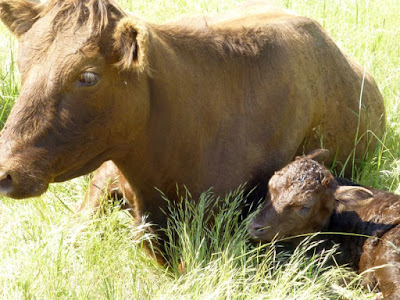 • Our Jersey Giant chicks arrived at the post office. 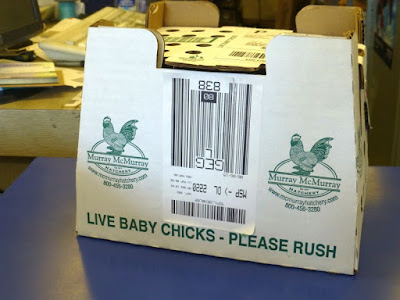 Considering the breed is giant, the chicks are sure tiny. But they all looked healthy (we also have one "mystery bird" the hatchery threw in for free). 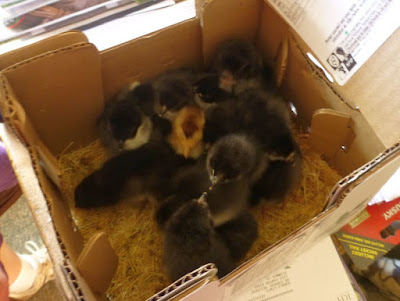 We set up a box with food and water (and later a heat lamp). 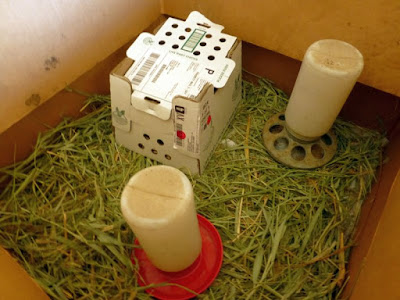 After dipping each one's beak in water (to teach it how to drink)... 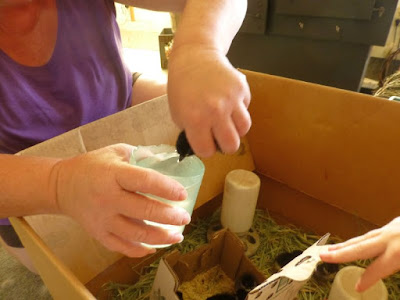 ... they settled into their new home. 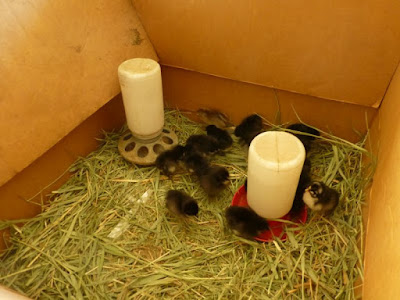 So far they appear to be a very calm breed. The chicks are less "hysterical" when we change their food and water.

• Don worked like mad through that hideous heat wave, finishing up the fence area he tore out last week in order to re-do it properly. He mixed concrete in the tractor bucket... 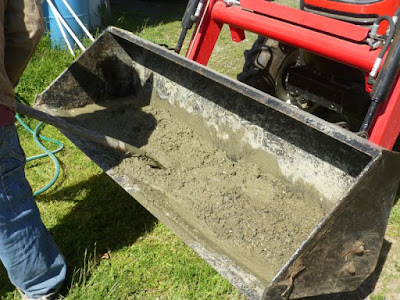 ...straightened all the poles, and set them up. 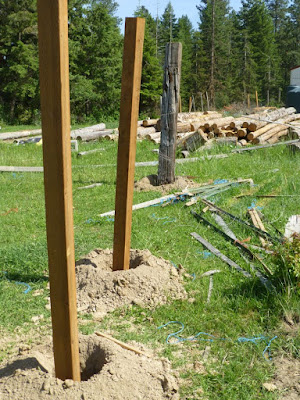 He took a trip to town and splurged on ten cattle panels (sometimes called hog panels). They're expensive, but we're love them because they're sturdy, long, and portable (meaning, we can move them from place to place as needed). We try to buy a few every year, so this is our year's allotment. 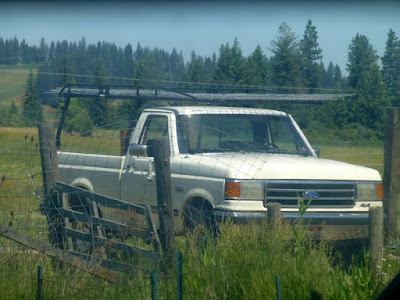 Then he installed the panels to the poles. He wants to fasten boards top and bottom to lock the panels in place (and prevent the animals from pushing them either at top or bottom), but he delayed this step because of the heat. 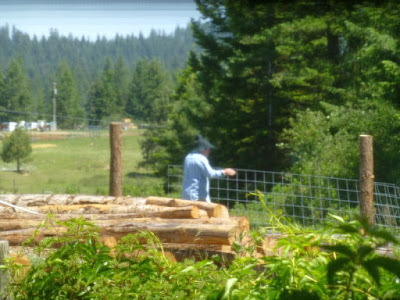 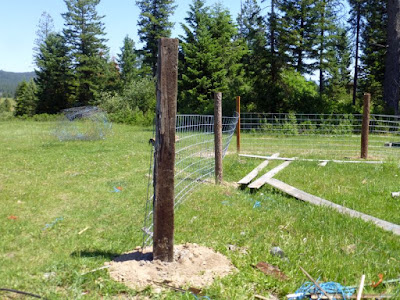 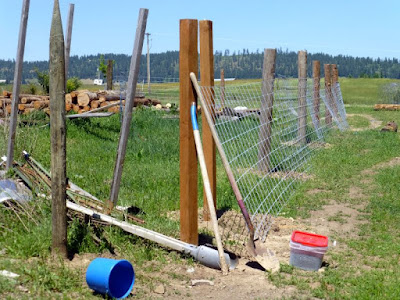 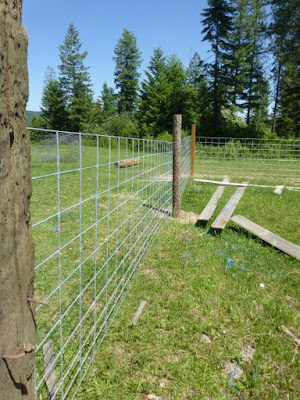 • He also set up the cattle panels in a clever gate system to span the driveway and make a "chute" between one pasture and the other, which means we don't have to rotate the cattle around the entire property before putting them in the woods. At sunset the day Don finished the fence, we tried out the system. We can even close the gate at the end of the driveway so the animals can crop the grass growing along the road. 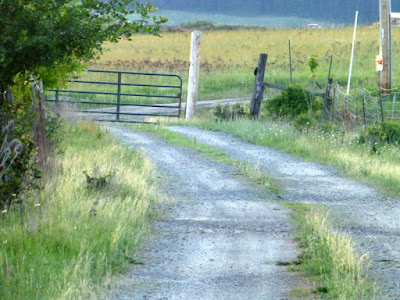 Here Brit is waiting impatiently for Don to open the fence. 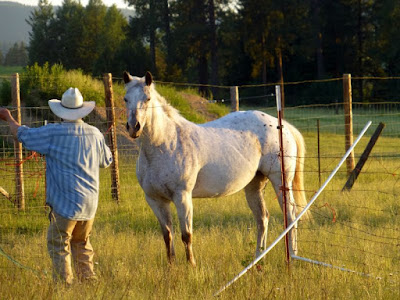 The animals all respond to our universal "Bossy bossy bossy" call, and milled around the fence until we opened it up. 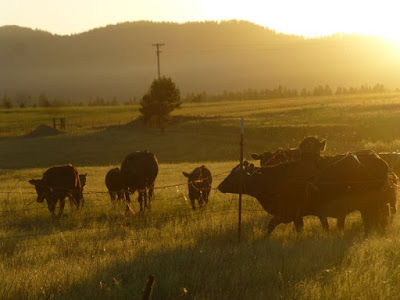 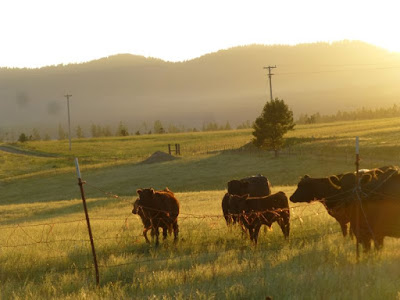 Victoria made it through the gate just fine, but little Jerky (only 24 hours old at this point) got lost, so I heaved him up and carried him across the driveway. 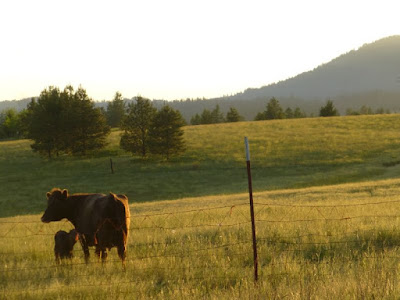 But Don's new gate system worked flawlessly. Within moments the cows were on the cooler wooded side of the property, which offered them shade from the broiling temperatures (although as of this writing, the heat wave has broken, whew). 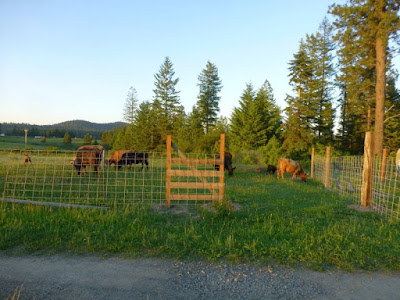 • This isn't really preparedness-related, but I noticed this group of ravens gathered on a distant treetop. 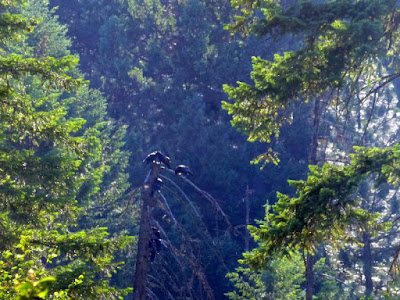 We've been having ravens all over the place lately. Don't know why. 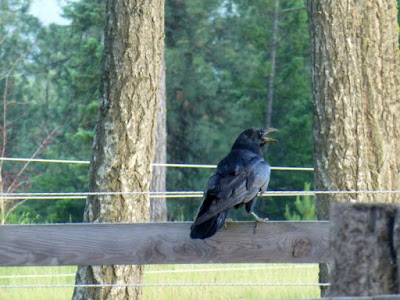 • I skimmed all the cream from the milk which had accumulated in the fridge, and made three pounds of butter (which I froze). 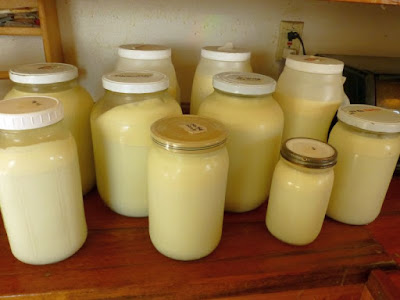 • A neighbor made about a dozen trips over with his trailer to get compost to work into a large garden area. Don loaded it with the tractor. 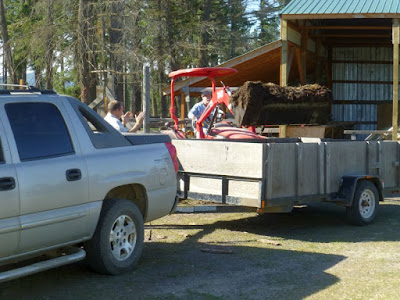 He cleaned out a lot of our compost, which is great since we now have room to re-pile more as it comes. 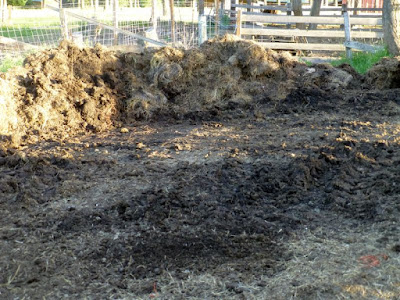 • The girls picked strawberries. Third time this week. The berries are starting to ripen fast. 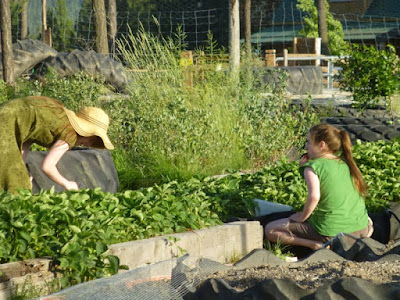 • We got the drip system up for the ancillary vegetables -- bell peppers, cayenne peppers, broccoli -- that I started in the house. 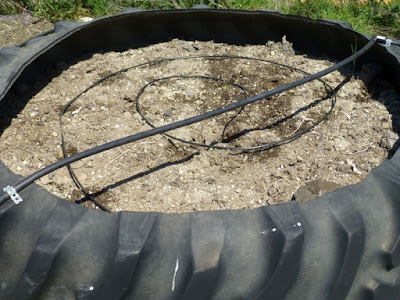 Then I got everything planted. I don't think the broccoli will make it, though. 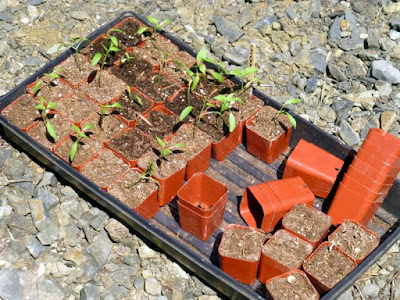 Here are the cayennes. 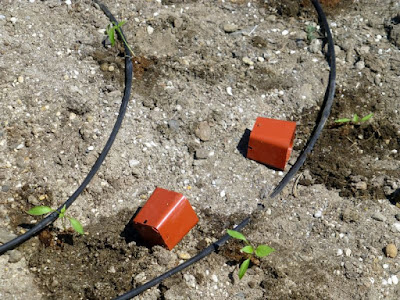 • Didn't get photos, but we got the corn tires topped with compost. The next step is to get the drip system in place, and plant seed. It's awfully late to plant corn, but I have enormous confidence that the short-season open-pollinated variety we tried last year, Yukon Chief, will yield successfully. Last year we planted on June 5 and harvested on August 29, and got 600 ears. I'm hooked on this corn variety.

That was our week. What have you done?
Posted by Patrice Lewis at 9:18 PM