Friday was a hot, humid, thundery afternoon, but the storm clouds dodged around us (which is unfortunate, as we could use the rain). 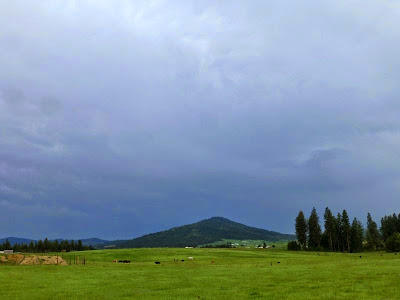 Don and I decided to take a walk. On our way out, we noticed a calf chasing a raven in the field. 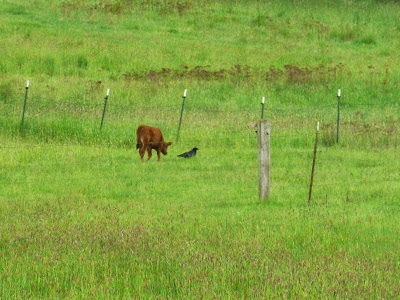 A few other animals got in on the chase as well. 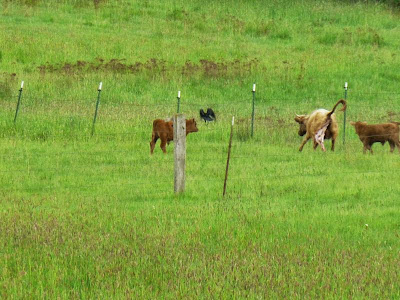 But we didn't think much about it. On the way back from our walk, we noticed the raven being chased by a blackbird. The raven had something in its beak, and I remember commenting that I hoped it wasn't a baby blackbird. 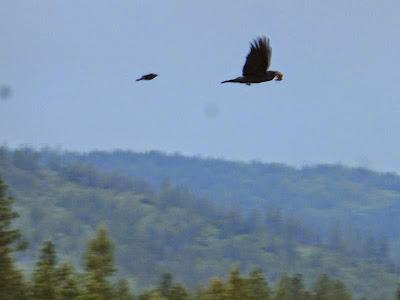 As we came up the driveway, we noticed one of our young heifers, Dusty, off by herself in the corner of the pasture. When cows go solitary, it usually means one thing. 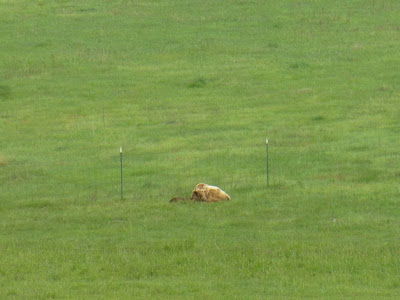 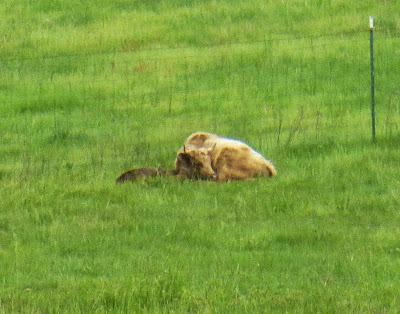 So that's what the Raven was after, and presumably holding in its beak: not a baby blackbird, but part of the placenta. When I downloaded the photos, I was astounded to see that Dusty was in fact chasing away the raven with the placenta still being delivered. 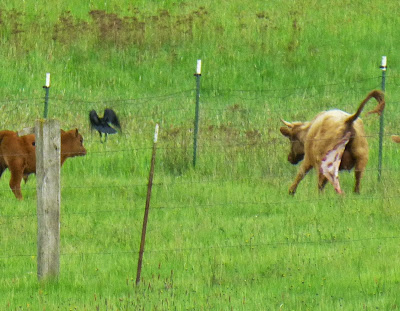 Since the calf was born the farthest possible distance away from the house (of course), we were faced with the task of bringing mama and baby into the corral. We like newborns to be close to home so we can either castrate or dehorn as necessary. But how to haul a 30 or 40 pound baby from five acres away? We decided to use the tractor.

Periodically the rest of the herd came over to see the newborn (I brightened the photo to make things more visible). 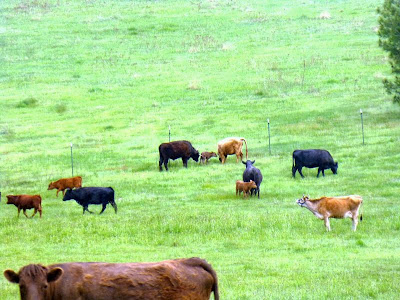 Sure enough, here's the placenta. Bon appétit to the ravens. 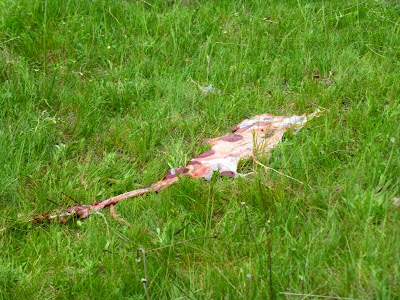 I sincerely wish I could have gotten photos of what followed because (in retrospect) it was hilariously funny. Don drove the tractor to within a few yards of Dusty. I walked over and scooped up the calf and then sat in the bucket of the tractor with the calf in my lap. The baby struggled and the tractor bucket isn't exactly made for sitting, but I managed. Don crept the tractor backward and in fact backed the machine all the way back up the pasture, with me holding a heavy, struggling baby in my lap. (We figured going backward allowed Dusty to see where her calf was.)

Meanwhile the herd, excited at the novelty of not only the new baby but a tractor as well, literally thundered and stampeded all over the field and in wide circles around the tractor as it moved. My camera was jammed in my pocket and I didn't dare let go of the baby to fetch it, which is a shame because it was a splendid photographic opportunity.

By this point I was covered in meconium (baby poop) all across my lap, legs, and arms. We made it to within about fifty feet of the pasture gate when the baby started struggling so hard I was afraid it would hurt itself, so I yelled for Don to stop. Then I scooped it up and we trotted as fast as we could toward the gate. Don opened it and I deposited the baby on the other side.

Now we were tasked with getting Dusty out of the pasture. She was milling around with the other animals, understandably distressed about where her baby went. We couldn't single her out from the herd, so we fetched the girls and managed to get Dusty out of the pasture. But she still didn't "see" her baby (hormones and stress will do that to a cow), so in the end I scooped up the baby again (by this point we found it was a girl) and I put her in the barn, then we separately scooted Dusty into the corral and thereby reunited the two. Whew, what a rodeo! 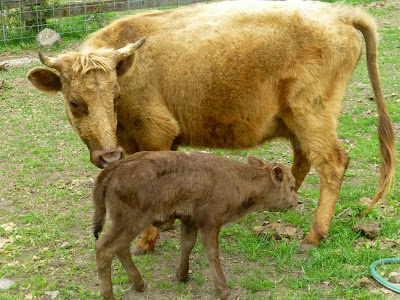 The baby is a very pretty and unusual dusky color similar to her mother's when she was born. Younger Daughter named the baby Adina, so we'll call her Dina for short. 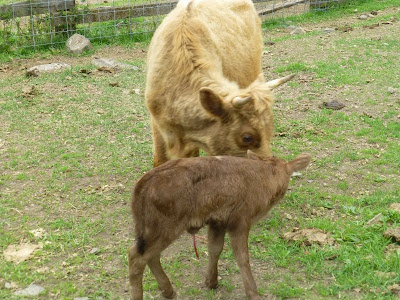 This is Dusty's first calf. She is settling in to be a good mother, though she's understandably suspicious of us at the moment (for stealing her baby!). 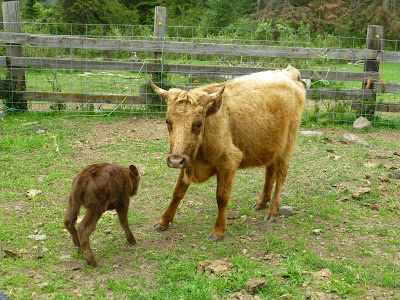 We left Dusty and Dina in the corral and went to fetch the tractor, which was still in the pasture... 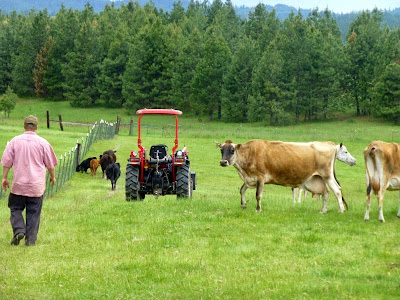 ...then I took a much-needed shower and consigned my clothes to the laundry. 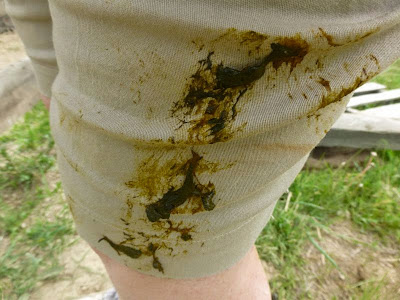 We'll keep Dusty and Dina in the corral for a few days until Dina is old enough to dehorn, after which we'll return them to the pasture. 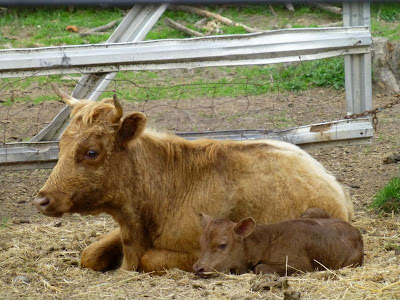 I tell ya, life is never dull around here.
Posted by Patrice Lewis at 5:20 AM