This is for all you history buffs out there -- the Magna Carta was signed 800 years ago today by King John at Runnymede in 1215. 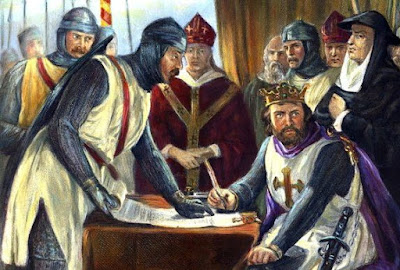 I knew about the circumstances leading up to its signing, of course, but what I never realized was the impact it had on our own country's founding documents -- the Declaration of Independence, the Constitution, and the Bill of Rights. For an interesting partial analysis, click here. 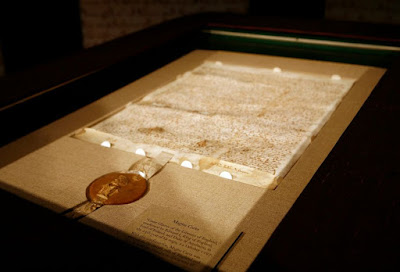 It's true the Magna Carta had very little impact at the time -- it was largely ignored, later annulled, then reinstated but stripped of some of its more radical elements, etc. -- but throughout its turbulent history, its essence was distilled into the notion that ordinary citizens have rights granted from God that kings and tyrants cannot take away. 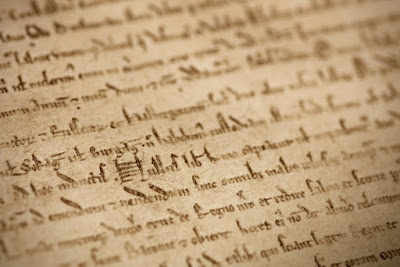 While the document had more to do with the rights of Barons under kingly authority, it went beyond simply addressing individual baronial complaints and formed a wider basis for political reform.

Or, to phrase it better, it was "the foundation of the freedom of the individual against the arbitrary authority of the despot ... intended to secure the individual from the arbitrary exercise of the powers of government, unrestrained by the established principles of private right and distributive justice. ... The Magna Carta limited the unbridled centralized power of the king. It began the process of redefining government's purpose from dominating people's lives into guaranteeing individual rights, culminating in the U.S. Constitution." 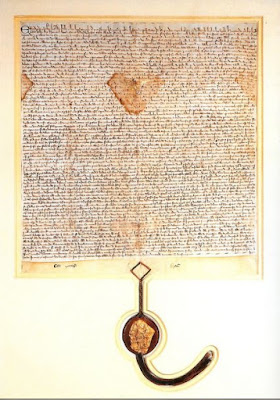 The impact of King John's forced signing has rippled down the centuries and influenced untold numbers of political documents around the world. King John may not have liked signing the Magna Carta (just as our current politicians don't like adhering to the Constitution or Bill of Rights), but its very existence gives hope for the future. That's because the Magna Carta, like our own founding documents, included formal means of "collectively coercing" the king if he disobeyed its principles. 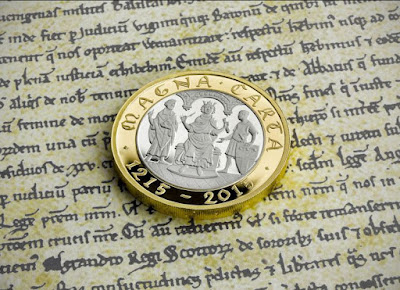 So happy birthday to the Magna Carta!