I am engaged in a writing project with a dear friend who lives in Virginia. We're doing a sort of mini-NaNoWriMo, challenging each other to write a minimum of 1000 words per day (hopefully more) on our current works-in-progress. The advantage of a writer's challenge, you see, is it forces you to forge ahead even though you may not like how a particular scene is unfolding. The idea is that you can discard the dross later. And surprisingly, a lot of what gets written turns out not to be so dross-y after all.

So far we've done quite well, although my friend has been whupping my word count fanny. But it's nice to make progress and force ourselves to work through whatever blocks had been throwing themselves up with our respective stories.

Anyway, yesterday I barely got my word count in, a rather pathetic 1034 words. That's because yesterday morning I hit the ground running and didn't stop until 10 pm. Here's what I emailed to my friend:

4:45 am -- put a batch of bread in the bread machine (Don took some bread out of its plastic bag yesterday evening and it was GREEN)

4:55 am -- start a batch of tankards baking in the oven (to force cure) -- we're shipping tomorrow 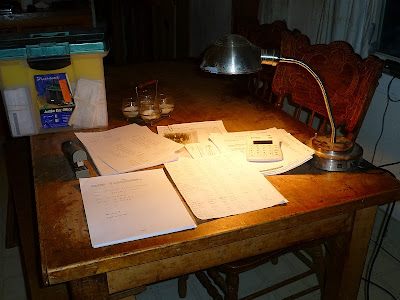 9:30 am -- Younger Daughter brought the chicken waterers into the house and ran them under warm water in the kitchen sink, since they were frozen solid; gave the chickens fresh water

9:45 am -- Scheduled a FedEx pickup for tomorrow -- we have 100 pieces being shipped out. This is more than we anticipated for this customer, but one of the boxes we shipped him at the end of January has been bouncing back and forth between Phoenix and Portland for five weeks (long story) and the customer is short 60 tankards as a result.

10:00 am -- Older Daughter went out to top off the livestock water tanks (a twice-a-day chore), found that the faucet is frozen solid. Most of the hoses are trapped under snow from earlier everything-is-frozen incidences). She asked for my help getting a hose unstuck and into the house to defrost. We'll have to run hoses from the faucet nearer the house, which is not frozen. 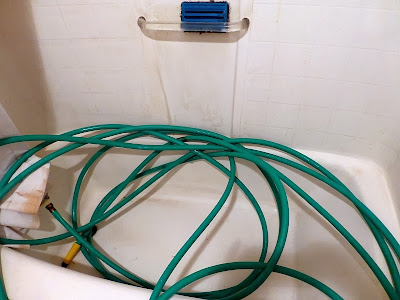 While dragging the snowy hose into the house, I managed to knock a can of Plasite (the brown stuff we use to coat the insides of tankards) off a bucket and onto the porch (we put the Plasite outside because it needs to stay cool or it solidifies). Sent Younger Daughter dashing upstairs into the loft for a fresh roll of paper towels as well as the gallon can of lacquer thinner in an effort to clean up the spilled Plasite, with limited success. We now have a reddish-brown stain about 10x15 inches permanently etched onto the concrete. I told Don I'd just added to the "character" of the house. 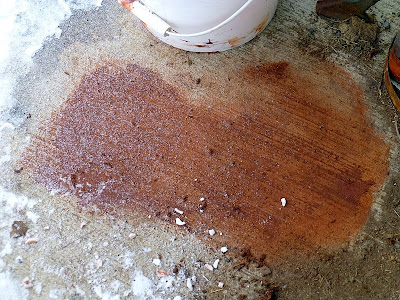 Later I sent her another email:

More venting. I forgot to add, we're packing 100 pieces for shipment, the girls still have to move the bulk of the firewood onto the porch (as well as make guarantee cards for the tankards and spread out 100 sheets of newspapers for packing purposes), I'm cooking dinner for 14 people since we're hosting the neighborhood potluck tonight, and the house is TRASHED.

Yes, it was that kind of day. Our tax appointment is tomorrow and I've already postponed it twice, so I have no excuse to postpone it a third time. Early morning was the only time to get some work done. So I huddled for a few hours in the dark kitchen with a gooseneck lamp for company. 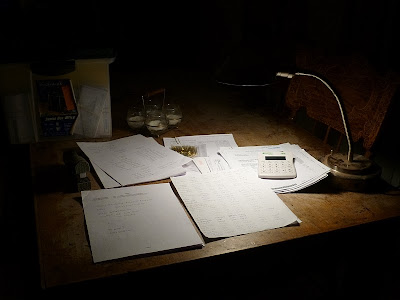 The house was, indeed, trashed. It always happens when we're working hard on a tankard production run. 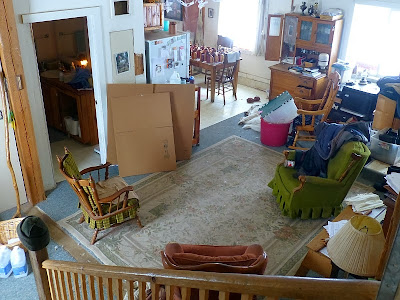 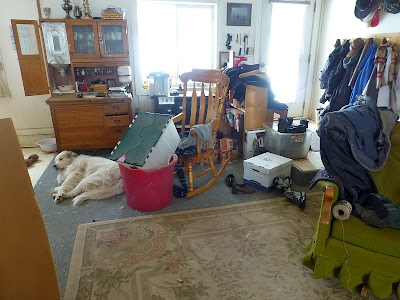 But it was one of those everything-is-hinged-on-everything-else days. We couldn't clean the house until the tankards were baked, tested, carded, and packed.

And I couldn't clean the kitchen until dinner was cooked and in the crockpot. 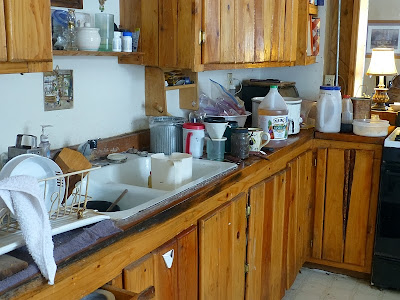 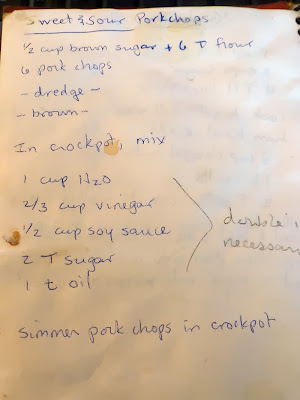 These are simple. Dredge pork chops in a flour and brown sugar mixture... 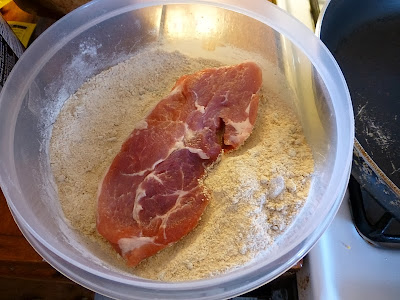 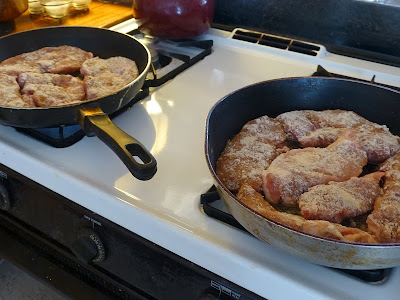 ...and let them simmer in sauce in the crockpot for several hours. 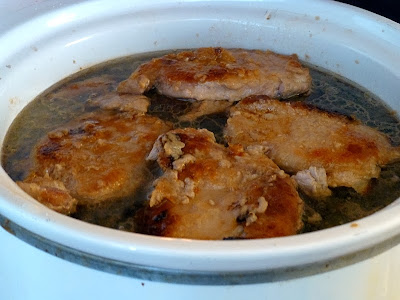 Meanwhile we tested tankards (filled them with water) to make sure there were no leaks. 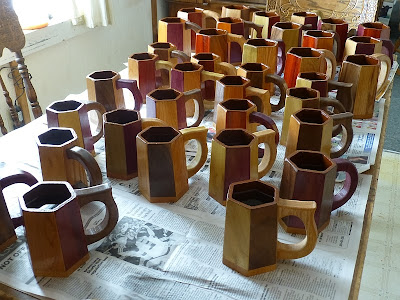 Ones that were already tested were on the floor (guarded by Lydia), awaiting guarantee cards. 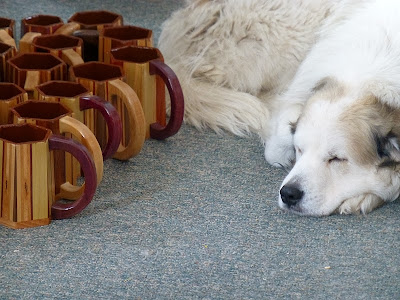 It's the girls' task to make guarantee cards. 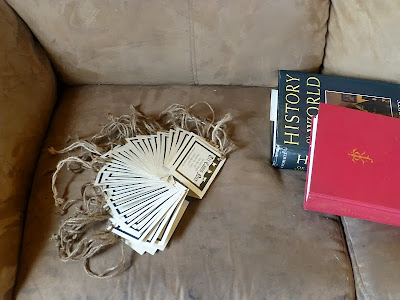 While Don and I worked on tankards, the girls pulled in all the firewood we cut and split yesterday... 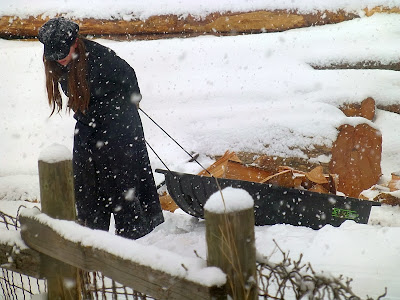 ...and stacked it on the front porch. 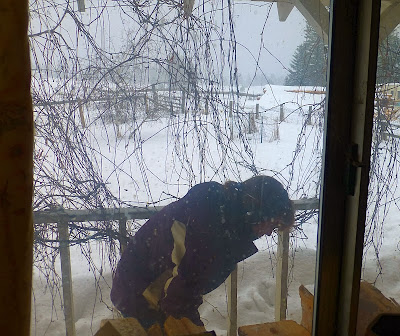 It was snowing cats and dogs the blessed day long. 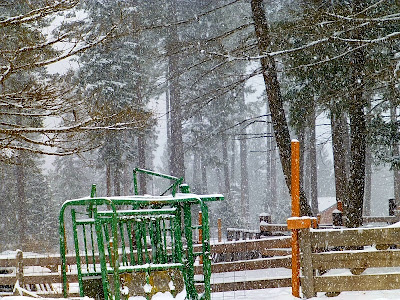 As the day went on, we made progress on our tasks. Here's a box half-way packed with tankards. 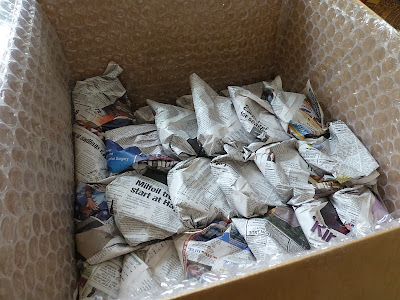 The kitchen got halfway tidy. 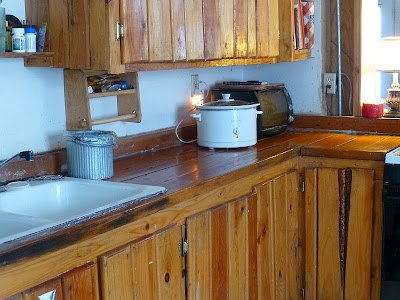 Don paused to scratch Lydia's back, which is always itchy. 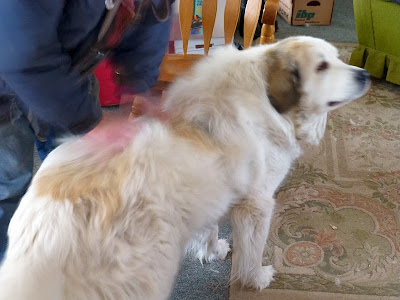 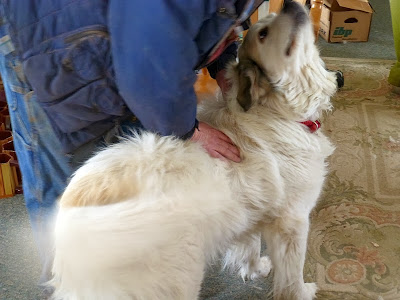 Late afternoon. Time to clean Matilda's stall and feed the beasties. They were very snowy... 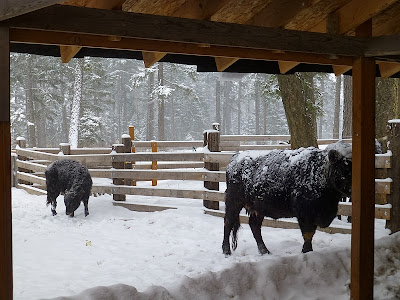 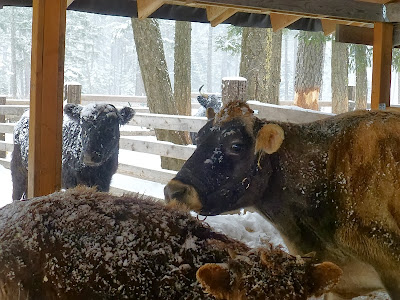 ...which, oddly, they don't seem to mind too much. They often prefer to stand in the snow rather than under the awning. 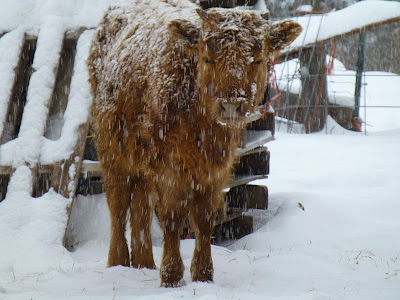 By evening we had things under control. The boxes were packed and ready to ship. 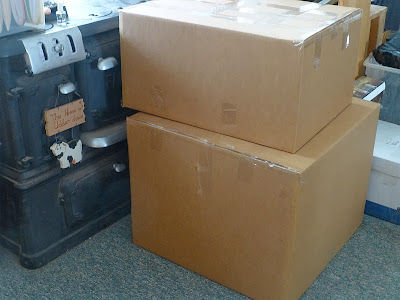 The table was clean... 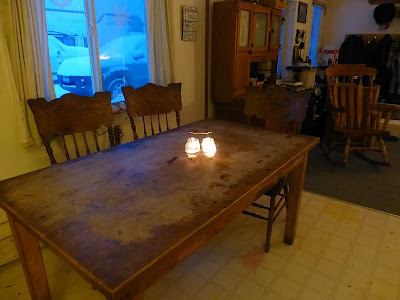 The house was tidy enough to receive guests... ...and I could stop and pour a much-appreciated glass of wine. 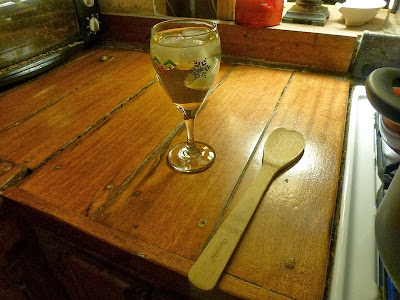 The nice part about our neighborhood potlucks is it allows us to connect on a regular basis with those who live around us. We're blessed to have to many wonderful folks living nearby.

I never did get much more added to my word count, but we got a lot done, so that's something.
Posted by Patrice Lewis at 6:40 AM