Six months in the Middle Ages

I've often heard it said that if the bleep were to hit the fan in the form of a collapse of the electrical grid, then we'd all be plunged back to the 19th century. I actually remember reading a comment one time in which an older man gave a verbal shrug and said, "What's the big deal? Our great-grandparents lived when there was no electricity and they got along just fine."

These kinds of conclusions always leave me sputtering in disbelief because it portrays just how little people understand the complexity of our modern society and how dependent we are (directly and indirectly) on electricity for everything.

I shouldn't have to point out three major flaws with the idea of 19th century America: (1) Everyone grew up without power, so it's not like anyone was abruptly plunged into an unknown and frighteningly primitive lifestyle; and (2) the infrastructure for life without electricity was already in place; horses, mules, and oxen were already trained to pull carriages, wagons, and plows; everyone had the tools and equipment necessary for nonelectric living; and society was built, literally built, around the idea that everything was done by manpower or horsepower; and (3) the population in America was much much lower, both in rural areas and especially in urban areas.

In short, it's my private speculation that if America were to suddenly lose power nation-wide, we wouldn't be plunged into 19th century America. Instead we'd be plunged into the Middle Ages where life was short, brutish, and full of back-breaking hard work.

But enough philosophizing. There was a link on Survivalblog a couple days ago which I found fascinating. It seems a Russian man (who is a serious history buff and historical reenactor) will be participating in a sociological project lasting six months in which he will live exactly like a Russian peasant lived during the Middle Ages. Specifically the article states: A historical reenactment group is attempting to recreate medieval daily life outside Moscow. In an experiment launched in Khotkovo, just a few dozen kilometers from the hustle and bustle of Europe’s largest megalopolis, a 24-year-old man will spend six months alone in a medieval-style farmstead. The idea is to see if a modern person can survive in a 9th-century environment, with no access to electricity, the Internet or other modern amenities, and what impact living a hermit’s life will have on his psychological state. 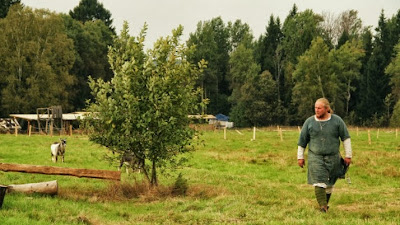 As something of a history buff myself (including Medieval and Renaissance history), I find this project both fascinating and intimidating. To truly live a Medieval lifestyle, especially that of a peasant, means life is likely to be short, brutish, and full of back-breaking hard work.

If nothing else, the big strapping 24-year-old man engaging in this experiment will emerge with a DEEP appreciation of what our ancestors endured on a daily basis. I do, however, have a bone of contention in the final paragraph of the article, which states: People with a passion for historical reenactment can spend a whole year making replicas of period costumes and weaponry to show them off at a gathering that may last for only a week. With Sapozhnikov, this passion has been brought to its logical conclusion. His escape from the stresses of the modern world into another era with a more simple way of life is a dream cherished by many. 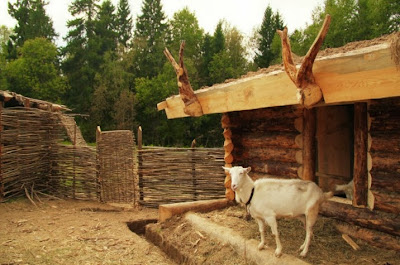 An interesting experiment, nonetheless.
Posted by Patrice Lewis at 7:57 PM