The importance of a work ethic

This week Don has been employing Enola Gay's oldest son, Master Hand Grenade, to help build an awning on our barn for additional shelter for our cattle this winter.

This young man is doing a lot of stuff he's never done before, but he attacks each step with enthusiasm and willingness. More importantly, he's courageous. Due to some birth difficulties, Master HG's sense of balance isn't the best, but that didn't keep him from tackling heights and climbing on roofs. Don has come away with a deep appreciation for Master HG's work ethic. 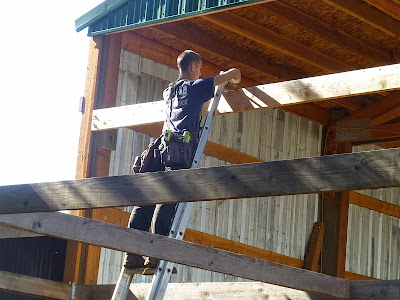 I never worry about people who have a work ethic, because that alone will carry them far in life, no matter their age. I know a couple in their 50s who, despite high levels of education, kept body and soul together by pulling weeds after the husband lost his job. He later found a position commensurate with his work experience and education, and I would like to think his present employer was impressed that he preferred to pull weeds than take easy government money while unemployed.

It's those who lack a work ethic that concern me. The lack of a work ethic isn't just an annoyance that someone refuses to pull his weight. It's an attitude that permeates one's entire life and has repercussions on everything from employment potential to how you raise your kids. And above all, a solid work ethic impacts how you fare in a bad economy.

The problem is that too many people don't know how to work. I don't mean they're physically or mentally incapable of doing the job; I mean they don't see the need to apply themselves any more than they want to.

Over at The Dependent Independent, Lee discusses how a work ethic could impact things if the bleep hits the fan. Worth a read.

Posted by Patrice Lewis at 9:44 AM