With freezing nights upon us, we've been harvesting the garden little by little and storing the produce wherever we can. We don't have a basement and it would be very difficult to dig a root cellar (heavy clay soil, poor drainage -- a hole in the ground simply fills with water). We eventually have plans to build an above-ground root "cellar," but until that happens, we have to make do however we can.

Today I dealt with the onions. Onions are ready to pull when the tops flop over. While nearly every onion I planted grew, I realized we didn't plant nearly enough. We love onions and use a lot, so next year I'll plant more.

A few days ago I pulled up the onions. The yield from the first bed filled a large basket. 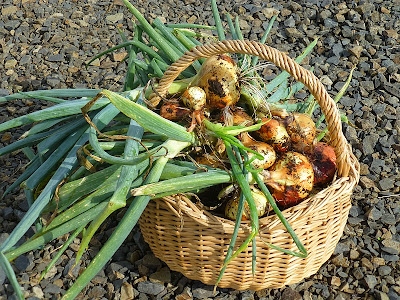 I filled an additional crate with the onions from miscellaneous other locations (no photo, sorry).

I put the crate and basket by the woodstove for a few days so the onions could dry. This morning, since the outer skin was dry and papery, I decided to try my hand at braiding onions.

I found a link on how to braid, but while that showed me the general idea, it sure as heck bore no resemblance to reality, as I found out. 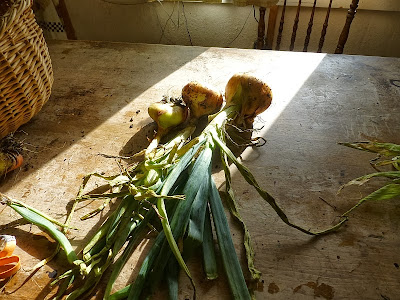 First thing I did was trim the roots to about an inch long. (Why this is important, I have no idea. It's not like onion roots are terribly big.) 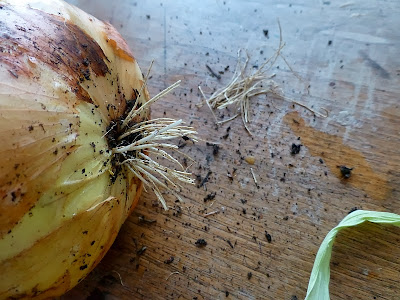 I also brushed off the extra dirt. 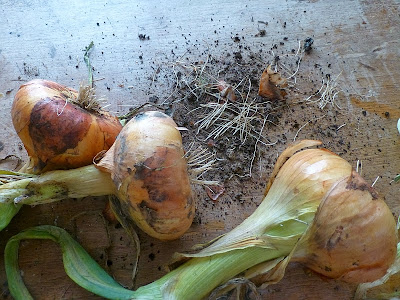 The online instructions suggest a braid of thirteen onions, beginning with the largest three. 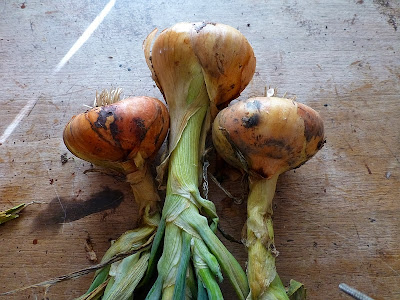 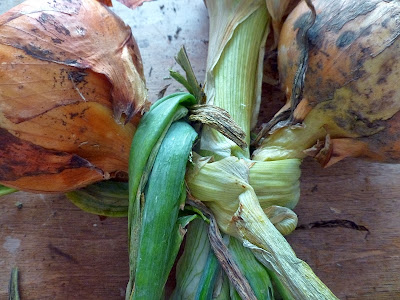 I added a fourth onion and kept its stem aligned with the center onion, then braided everything twice. 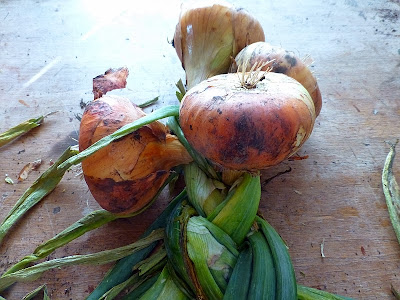 After this things got kinda messy. The idea is two new onions are added as the braid increases, with their stems mingling with the existing braid. In reality, the stems were so thick (or too thin) that unevenness quickly took over, and it was hard to tell which side to mingle the new onion stems with. It was also awkward to stop and prep a new onion each time I needed to add one. But I blundered through as best I could. The idea, presumably, isn't to get them into picture-perfect photogenic braids. The idea is to keep them together while allowing them to stay exposed to the air. 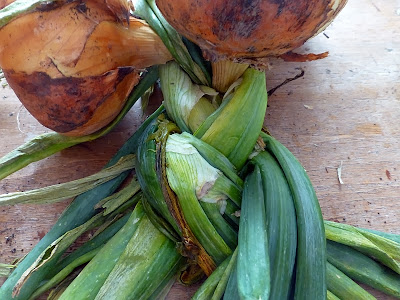 After thirteen onions are braided together, the ends are tied with a piece of twine. 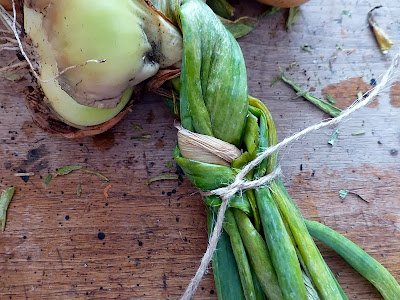 I couldn't deny the end result was very pretty... until I picked it up. The braid must have weighed twenty pounds. Here's another thing I realized from the online instruction guide -- if you're using BIG ONIONS, don't braid thirteen of them together! The "thirteen" rule should only be for small dainty onions, not these whoppers I got from the garden. 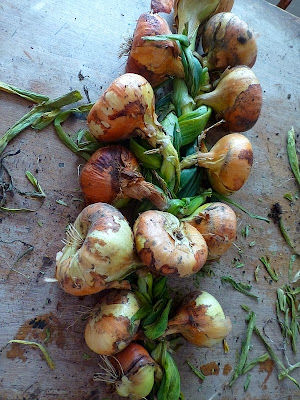 However I didn't come to this conclusion until later. Gamely I tried another braid, but this time I prepped thirteen onions first by trimming their roots and brushing off the dirt. This also allowed me to sort for the largest three to use as the base. 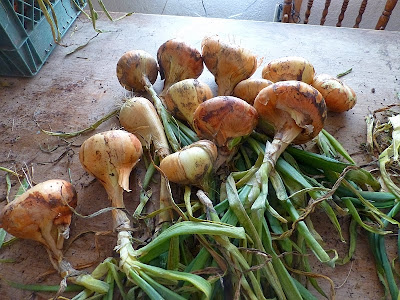 Again I felt like I was blundering my way through, but the result was pretty and I started to feel a wee bit smug, always a dangerous thing. 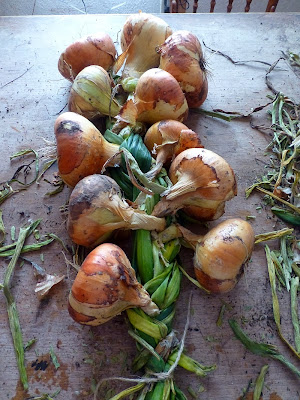 I braided two more strands, which used up most of the onions. 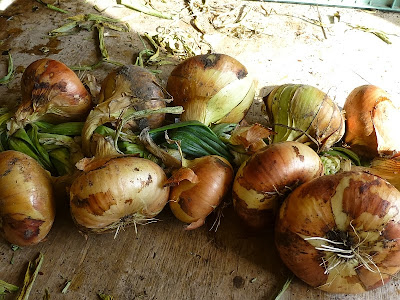 This left the kitchen a mess (make a note: next time, do this outside)... 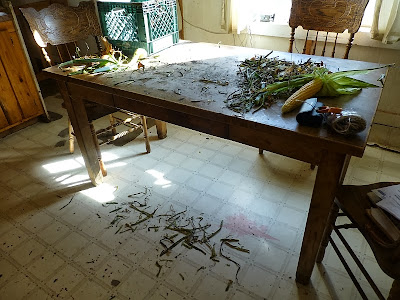 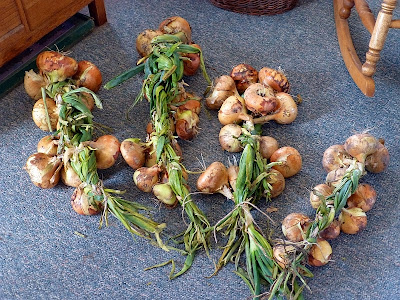 After giving the matter some thought, I decided to hang the onions upstairs where it stays cooler in the winter (onions are best stored in just-above-freezing temps, but we don't have that option). So I trotted out to the barn and fetched some sturdy hay bale twin, then came back in and lifted up two braids of onions to bring them upstairs.

Ooof. They were heavy. As I said, I'm guessing about twenty pounds for each braid. I got them hung and came back down for the next two braids. However as I climbed the stairs, one braid broke and a bunch of onions tumbled out. 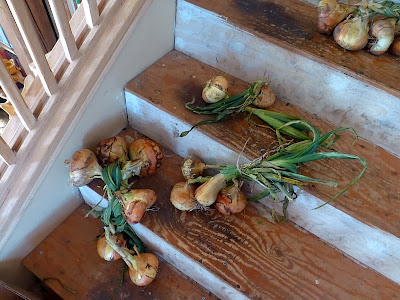 Turns out the braids were too heavy and the stems too slippery. I brought the partial braids back to the table and tied them up in half-braids. 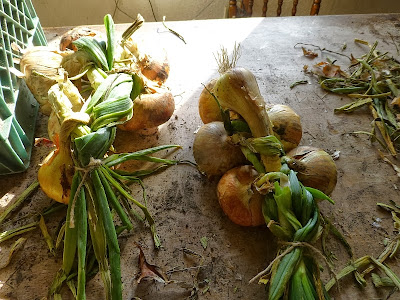 While I was doing this, I heard a CRASH from upstairs. Same thing happened -- about half a braid simply slid out from a too-heavy braid. 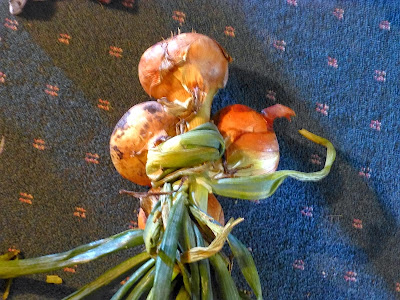 Make a note: when using big honkin' onions, thirteen are far too many for a single braid. Next time I'll braid them in braids of about five onions. I tied off the half-braids and suspended those along with the two still-intact longer braids. 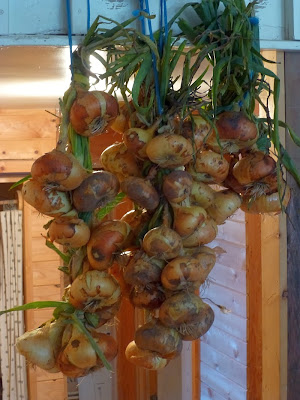 Despite all the ridiculous blunders, this isn't a bad way to store onions (at least, until we have a root cellar). I'm guessing the upstairs will smell of onions all winter, but that's okay. 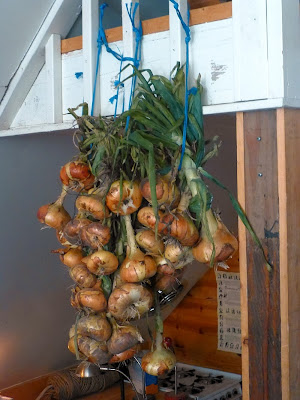 I had a few remaining onions, so I just trimmed off what stems they had and put them in our onion basket for immediate use. 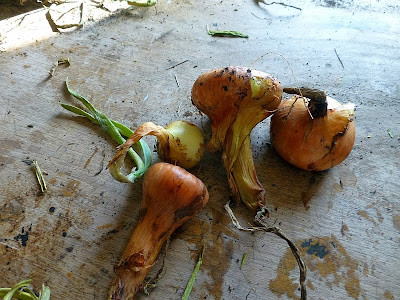 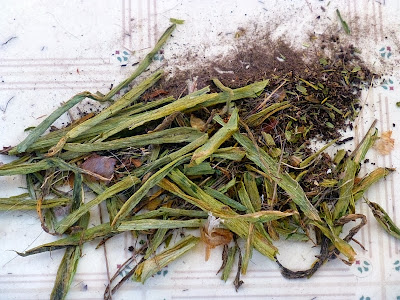 I know there are many ways to store onions -- hanging in mesh bags, even knotting them individually in old panty hose -- but since I had neither mesh bags nor old surplus panty hose, this solution seems to work despite the difficulties.

In short, live and learn!
Posted by Patrice Lewis at 12:40 PM

Email ThisBlogThis!Share to TwitterShare to FacebookShare to Pinterest
Labels: onions