Ever since mid-December when we battened down the hatches for some high winds and snow, we've had six young roosters tucked into an inside cage in the chicken coop. 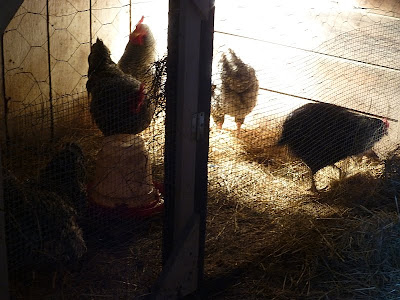 Since we used the incubator to hatch two batches of chicks last summer, the young roosters have been gradually coming "online." For the last few weeks these boys had been wreaking havoc on the ladies, so life was much happier for the hens with these randy fellows out of reach. Nonetheless it was past time to put these boys in the freezer.

So early Wednesday morning when it was barely light, Don and I bundled them into boxes padded with a bit of straw, and I drove them to the butchers. On the way I collected two extra roosters from a neighbor who had a surplus. 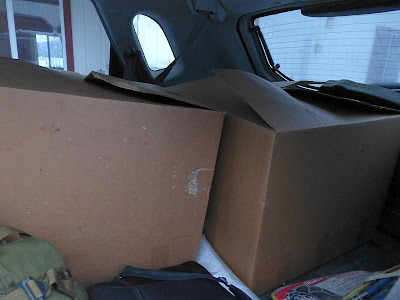 The butchers are located at the top -- and I mean the TOP -- of this range. 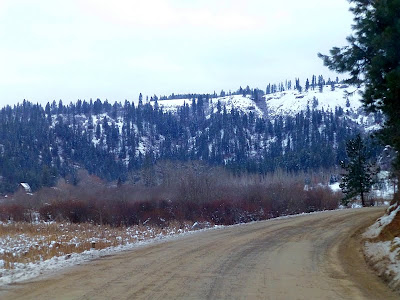 It's four-wheel-drive conditions this time of year. 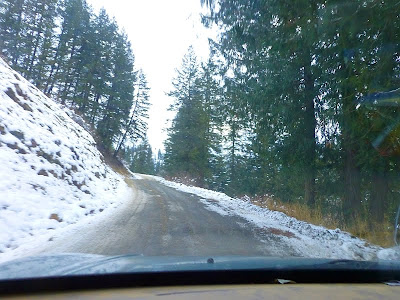 But once I crested the hill and got to the flat on top... 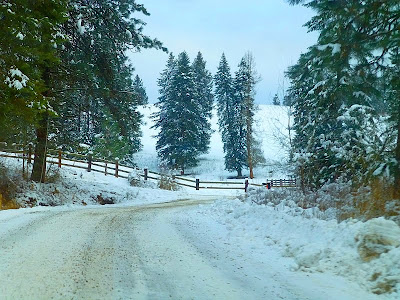 ...I'm greeted by one of prettiest little farms in the region. Sure wouldn't mind owning this place! 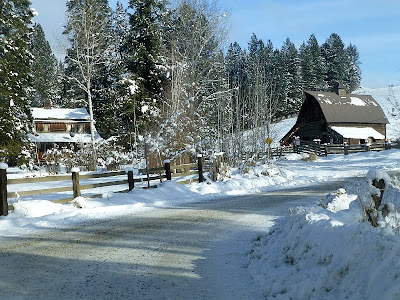 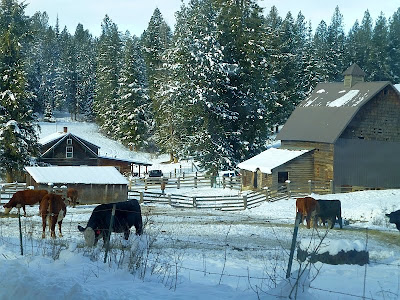 I drove a mile or so more until I came to the butchers. They had everything set up. 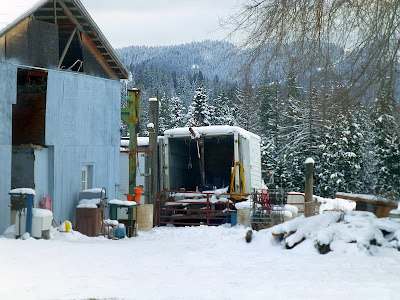 The orange items are killing cones, the barrel beneath it catches the blood. 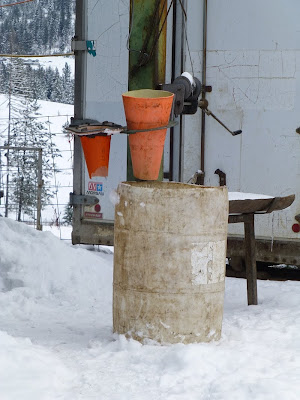 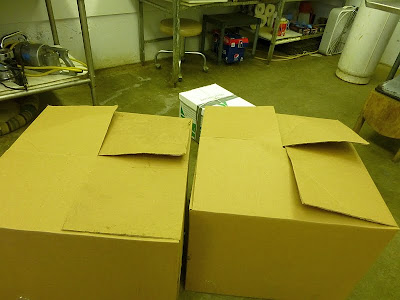 While the butchers were doing their dirty deeds, I drove back into town to do some errands and wait for their call. I passed a bunch of bald eagles perched in trees by the river. 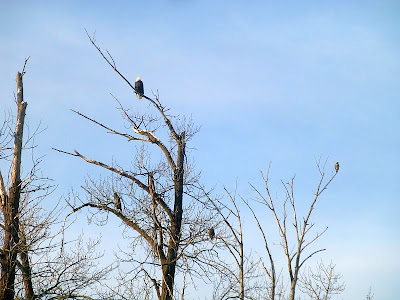 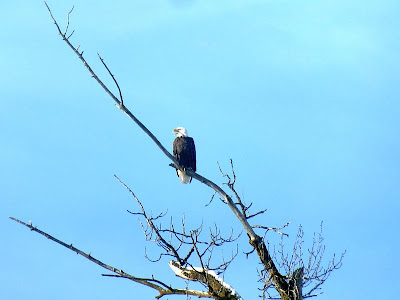 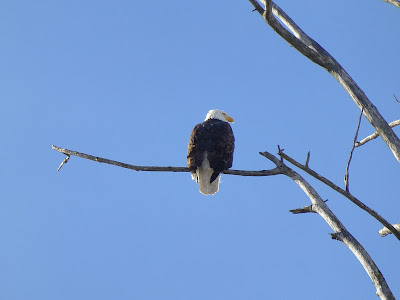 This probably isn't an eagle's nest, it looks more like an osprey's nest. 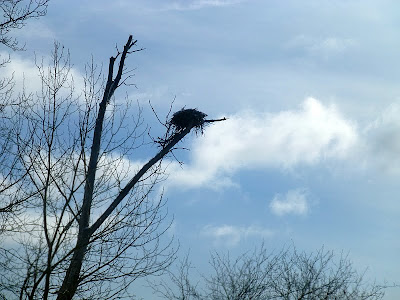 Anyway, the boys came home in a lot smaller of a box than the one they went in. 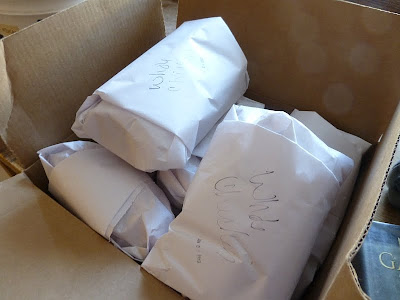 Now they live in our freezer.

After some discussion, we decided to keep our older rooster Snap. He's a good rooster, tame with us and not hard on the hens (some roosters are vicious to the ladies). 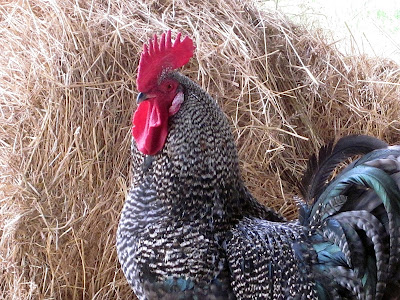 We also decided to keep this young fellow, one of Smoky's bandits (in the middle). 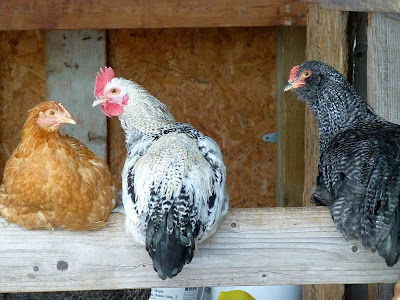 This is what he looked like as a chick. 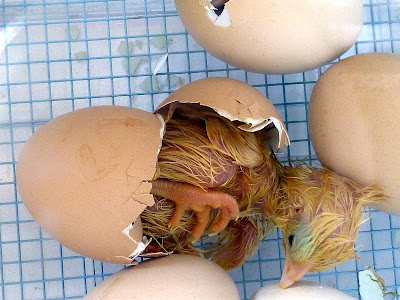 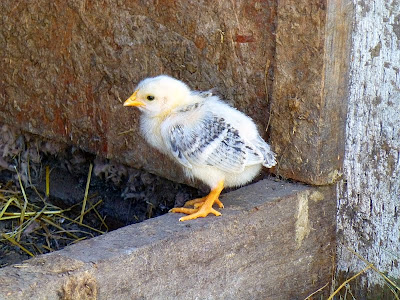 We haven't named him yet, but he seems very good-tempered (unlike the randy bunch we just sent to the freezer). Although we hatched him ourselves, his egg came from a friend who raises purebred Delaware chickens, which are considered a rare breed. They're beautiful birds and lay large brown eggs. This boy is also totally unrelated to any of the ladies, so he's a good one to keep.

With the surplus roosters gone, it was time to muck out the chicken coop again. 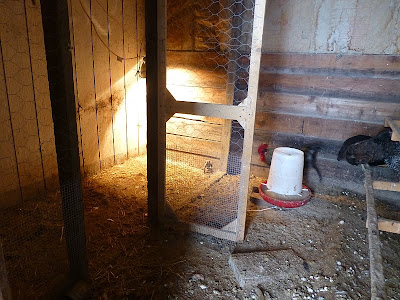 Smoky settled down to watch me. This bird is truly endearing. No wonder she made such a good mama. 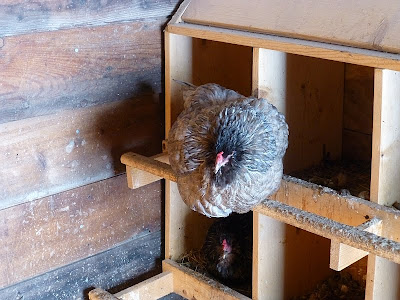 After a couple hours of hard work, the coop was clean and lined with fresh hay... 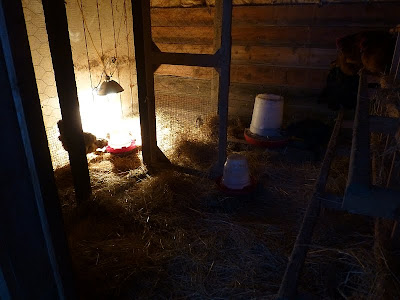 ...just in time for the birds to start settling in for the night. 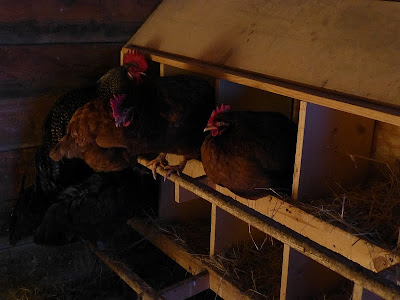 Yep, back to normal in the chicken coop.
Posted by Patrice Lewis at 8:30 PM