The amount of snow we received was a pittance -- only four inches or so. We got some wind which whipped into pathetically small drifts. In all, no biggee.

Until this morning. The high winds that were predicted for today DID come true, and boy did we get whumped. The wind actually tipped over an old refrigerator we have against the barn and skidded it sideways down the driveway until it lodged against a snow drift. The wind was screaming. Shrieking. Howling.

Naturally we lost power around 8 am, but only for an hour or so. No surprise, I could imagine trees coming down all over the region, hitting power lines and toppling wires. My hat's off to all those hard working linemen who go out in weather like this to restore electricity.

Around noon, the power went off again, and there it stayed until 7 pm this evening. 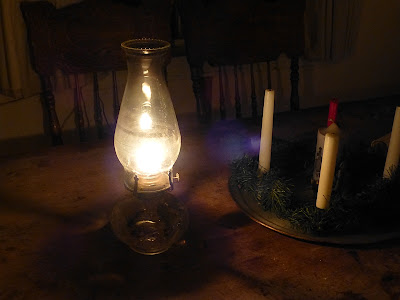 We stayed toasty warm because of the woodstove, but we lost water (our well pump is electric). Fortunately the girls had taken showers during the interim when the power was on. I taped the handle of the toilet so no one would accidentally flush, and we lined the bathroom garbage can with a plastic bag for holding used toilet paper.

Unfortunately during the interim with power, we didn't think to top off the livestock water or check the chicken water, which are normally evening chores.

I also didn't think to do dishes, and I faced a messy kitchen with no running water when the lights went out again. I finally heated some water on the stove (propane -- it works just fine without power) and washed the dishes, using two large bowls for double rinse water. (Worked great.)

Losing power was, as I told some neighbors this evening, the very best thing that could happen to all of us out here in our rural community. It gave us a chance to assess holes in our preps.

Our immediate hole, we found out, is water. I had about twenty gallons stored and we were nowhere near running low, but the thought that we could run low gave me some concern. We watered the chickens using stored water, and the cattle had enough water in their stock tanks for the day, so that was fine; but had the power been off for a few days, we'd be hauling water for the livestock and filtering pond water for ourselves using the Berkey filter. I also found some empty jugs that should have been filled with a few more gallons of water for storage (I made sure to do that this evening after the power came back on).

Our neighbor's hole in their preps, as they learned, was lighting. Night falls early this time of year in north Idaho, and they only lights they had available were candles. After seeing how well our oil lamps worked, they promised themselves to get some for future needs.

(By the way, you can turn a Mason jar into an oil lamp by purchasing inexpensive fittings from a company called Southern Lamp & Supply. A bulk pack of seven fittings (item # 7BR3273) costs $18.95. I believe they also sell glass globes, though I always scour thrift stores for extra glass globes and stockpile them as I find them.)

We spent much of the day reading and otherwise puttering around the house, getting detail work done that we normally don't bother with when we get so distracted with computers.

One funny thing that happened was a batch of bread I had in the bread machine went belly up. 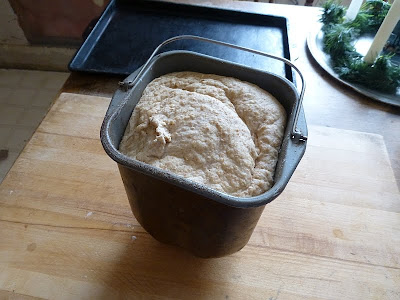 With all the other distractions of the morning, I totally forgot about the bread until the dough was stone-cold, so I didn't think I could revive it by baking it in a loaf pan. 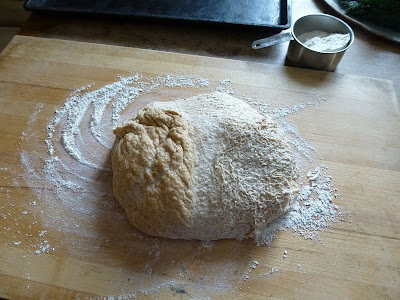 But, since I didn't want to waste the dough, I decided to try making bread sticks, just for giggles. I rolled the dough to about 1/4" thick... 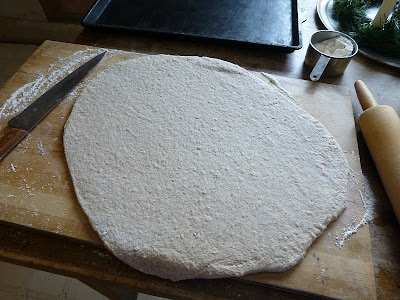 ...cut the dough in half, then sliced it. The slices were of various lengths. 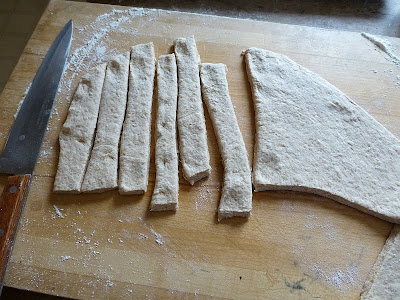 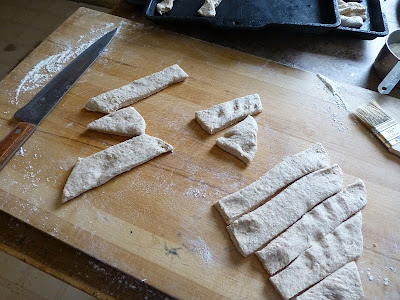 Then I twisted the slices and put them on cookie sheets. They tried to untwist, but not too badly. 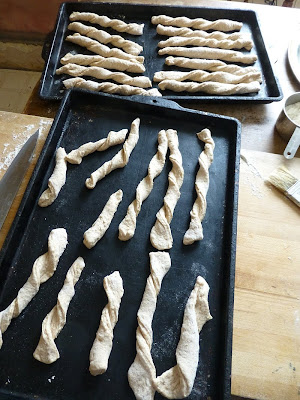 Then I melted some butter, minced garlic, and a bit of basil. 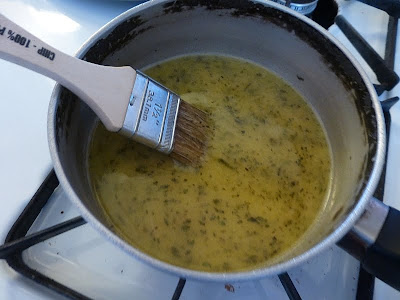 I brushed all the twisted dough with garlic/basil butter. (This is why doing dishes without running water was kind of a hassle -- lots of oily residue to clean up.) 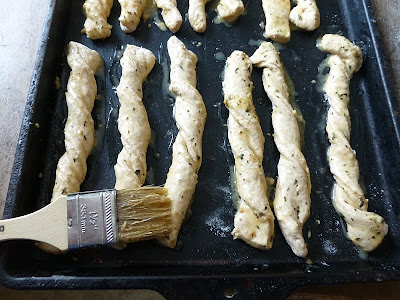 Then I sprinkled them generously with Parmesan cheese. 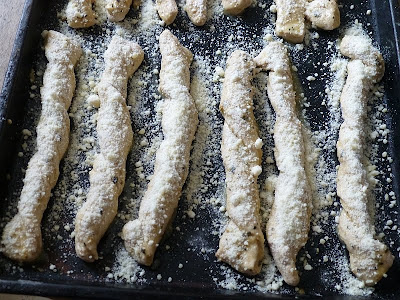 I baked them for about 15 minutes at 400F. And ooh la la, what a taste! They were soft, not crunchy like commercial bread sticks, but delicious! Talk about making lemons into lemonade! These were ALL GONE within a few hours. It was a fine experiment for a day without power. 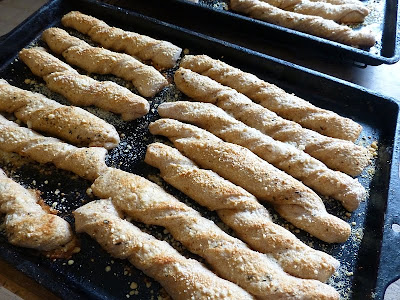 The power came back on (thanks, linemen!) around 7 pm, giving us much to think about in terms of increasing our preparedness. Sometimes it's good for our easy, comfortable lives to be interrupted to remind us of our blessings.
Posted by Patrice Lewis at 8:46 PM