Doubtless most of you have seen or at least heard about the controversial Time Magazine cover featuring a mother breastfeeding her almost four-year-old son. Many people reacted with disgust to the photo for two primary reasons: (a) the defiant attitude of the mom and the peculiarly “unbonding” attitude of the boy; and (b) the concept of breastfeeding children who are older. 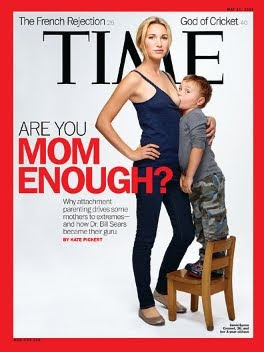 Critics of the cover say that the in-your-faceness of the photo will set back the advances of breastfeeding by years. I don’t know any woman who wants to stand in the shoes of the mother in that cover.

The focus of the articles in this particular issue of Time has to do with pediatrician Dr. William Sears and his Attachment Parenting method of raising babies. In a nutshell, Dr. Sears and his wife Martha (a nurse) promote baby wearing (using a sling), breastfeeding, co-sleeping, and other elements of bonding. They are the parents of eight children (adopted and natural), including one with Down syndrome. Believe me, if anyone understands the broad range of childhood situations, it’s these people.

Dr. and Mrs. Sears give what they call the “Seven B’s” of Attachment Parenting as follows: 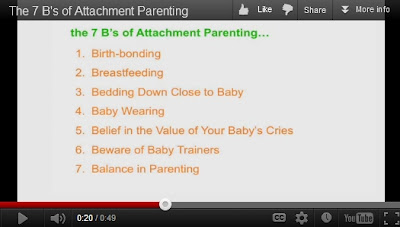 When my girls were babies, Dr. Sears’ book (appropriately called The Baby Book) was my baby bible. We adopted many of his recommendations. I am a huge fan of Dr. Sears’ methods. 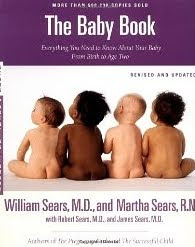 When our girls were babies, we lived in a tiny house and we had no room for playpens changing tables, wind-up swings, etc. Heck, we barely had room for a crib (it was in the living room for Older Daughter’s first year). Therefore it was a natural thing to sleep with the girls when they were babies. A secondary advantage is I never had to get up in the middle of the night to feed. All I had to do when a baby cried, as I so vulgarly explained to concerned friends, was roll over, stick it in her mouth, and go back to sleep. Don made a safety side-panel for the side of our bed and the baby slept on my side (rather than between us). That way I could be alert to any noise, hunger, or wet diaper issues with them. And let me tell you, there is nothing more heart-melting than to lie in bed and gaze at your sleeping baby. It’s a bonding experience like few other things. We transitioned each girl into her own bed by the age of two.

I breastfed both girls until they were about two as well. It seemed like a good and natural balance for me and the girls – long enough for nutrition and bonding and closeness, short enough that toward the end it was nothing more than momentary comfort as they became independent toddlers.


Dr. Sears strong advocates the use of a sling for babies, so the child can be on the mother’s body much of the day. Oh my goodness, I agree!! There are few baby products in the world more simplifying for a mother than a sling. I used slings with the girls constantly. There is no finer way to go through one’s day. The baby is content because he’s right where he ought to be (with mama), plus he gets to see and be involved in everything his mother is doing – washing dishes, talking on the phone, feeding the chickens, grocery shopping, etc. And the mother can go about her day unconcerned that baby is bored or getting into something he shouldn’t. When a baby falls asleep in the sling, the mother can either continue to carry him, or she can lay him gently in his crib and let him continue his nap.


My theory about many of the problems today – which is why I remain a huge fan of Attachment Parenting – is that our culture does everything it can to physically separate a mother and her baby. Strollers, cribs, playpens, even daycare… everything, it seems, is designed to keep a baby physically separated from his mother. Somehow baby-closeness is considered unnatural or even – yikes – unneeded.

Yet worldwide, that’s abnormal. In more (cough) “primitive” cultures, a baby was expected to be skin-to-skin (or at least cloth-to-cloth) with his mother for many months after birth. This isn’t to say babies were never allowed to be placed on the ground so they could learn to crawl, but rather that when not learning to move independently, a baby was happiest on his mother.

Now an interesting thing has come out of Dr. Sears’ theory: it seems babies raised with the Attachment Parenting method turn out to be better adjusted and more secure than babies raised with a hands-off philosophy. One of the things Dr. Sears said that always stayed with me was this: Needs that are not met as babies come back to haunt people as adults. (That’s not a direct quote, but that’s the gist.) It makes sense to me. If babies are forced to be “independent” from the person they need the most (their mother), how does this affect their mental health and emotional security as adults?

If babies have constant access to their mother during the stage in life when they critically need it – say, the first two years – then this natural need has been filled and they can move on to the next stages of increasing independence throughout childhood and into adolescence. While I can’t vouch for everyone, I know that’s the case with our girls. They received the bonding and physical closeness they needed as babies, and now as teens they’re respectful, mature, and increasingly independent. They have no emotional insecurity or neediness (beyond normal adolescent concerns).

How breastfeeding – literally the most natural thing in the world – could be considered “controversial” escapes me. The nutritional and emotional benefits of breastfeeding are absolutely beyond question. I realize there are circumstances under which women can’t breastfeed (physical limitations, breast complications, and of course adoptions, etc.), but the data are indisputable for breastfeeding benefits.

But for how long? Can you breastfeed a child for too long?

Interestingly, I was able to witness a situation with a family in which breastfeeding was only one component of an extremely unbalanced situation. I related this to a large extent in an earlier blog post (here) about two boys being raised in an emotionally unhealthy home with a dominant mother and an emasculated father. The mother believed in unlimited breastfeeding, and I witnessed an incident where her four-year-old son was physically abusive to his mother until he got to nurse. The fact that she gave in to his abuse and let him breastfeed was just the symptom of how messed up this family’s dynamics were.

Unconsciously, I think that’s what people are responding to when they see that Time Magazine cover: a visceral aversion that it’s the child who is ruling the roost. It’s not that Attachment Parenting is bad; far from it. Rather, it’s that some parents don’t know how to transition from the needs of babies to the training and discipline necessary for toddlers and preschoolers.

What are your thoughts?
Posted by Patrice Lewis at 10:30 AM