When we asked her what she wanted for her birthday, she replied "A new pair of ear buds and some fun tea." So we got her some ear buds, and let her choose some fun teas. (Note: the blueberry tea is terrific.) 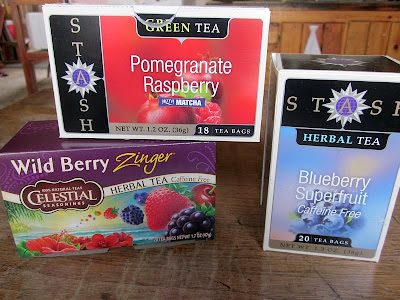 Yesterday we made our annual excursion to the Moscow Renaissance Faire for a day of fun and as Younger Daughter's birthday excursion. Together with our friends (the children of Enola Gay and Sir Knight), the kids dressed in costumes of sorts, a kind of rakish combination of steampunk and Renaissance.

Here's the group from my car: 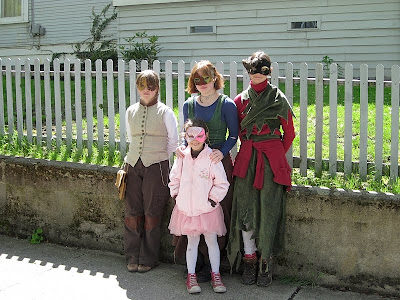 ("Now do something goofy!") 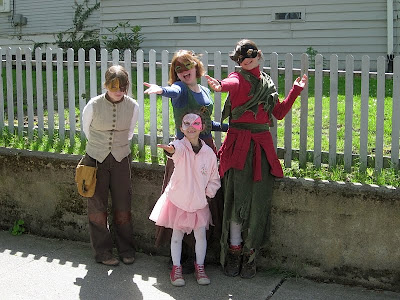 Here's the entire group once the other party found a parking spot and joined us. 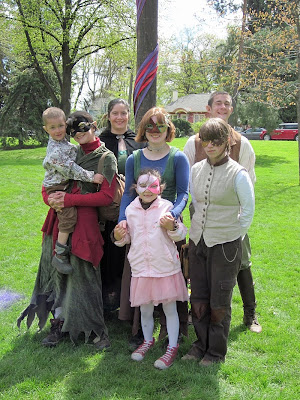 Having spent years doing Renaissance Faires (and becoming something of Ren Faire snobs as a result), by no stretch of the imagination could this festival be called a true Ren Faire. It's more like a hippy festival. But it's an absolute hoot and has become a favorite outing.

The first thing we saw on the main stage was a group playing eight xylophones hand-made in Zimbabwe out of gourds, PCV pipes, and other materials. Eight xylophones is something you don't hear very often and it was a really neat sound. 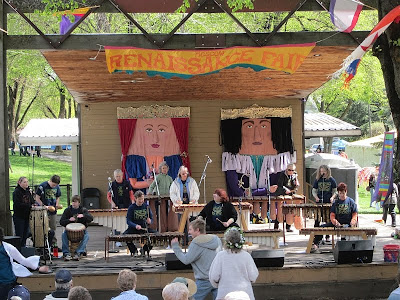 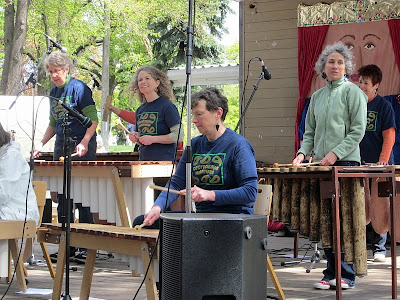 On the smaller stage was a group called the Potlatch Junior Jammers which was a terrific group of fiddlers. 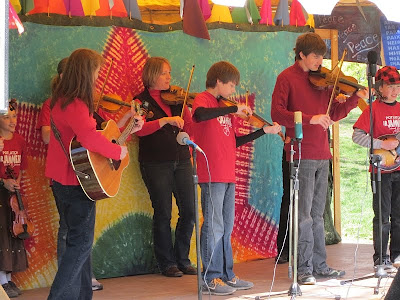 This young lady had a smile the whole time. 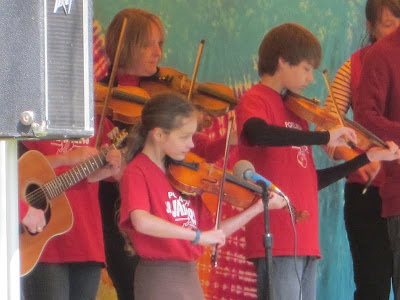 As proof that this is nowhere near a "real" Renaissance Faire, consider this popular booth: Tie-Dye Everything. 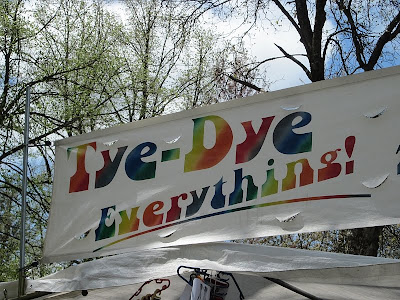 This would never be found at a true Ren Faire, but boy was it colorful. And if you ever have a sudden urge for tie-dye boxer shorts, this is the place to go. 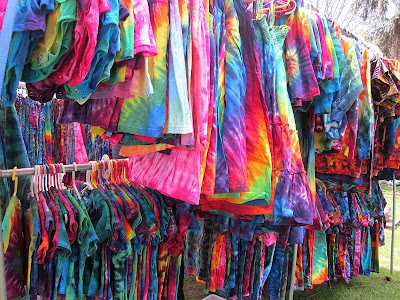 I liked this wooden Noah's Ark one vendor was selling. 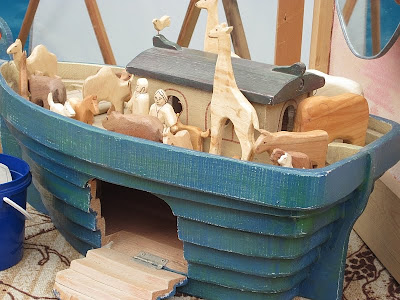 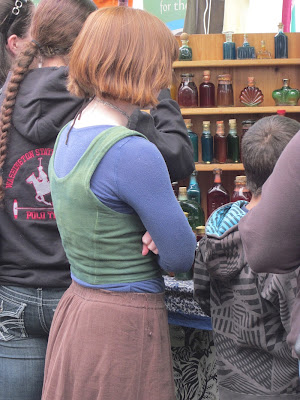 Bungee bouncing was quite popular. 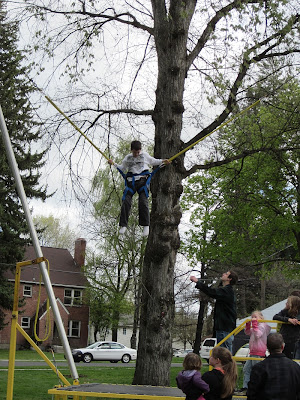 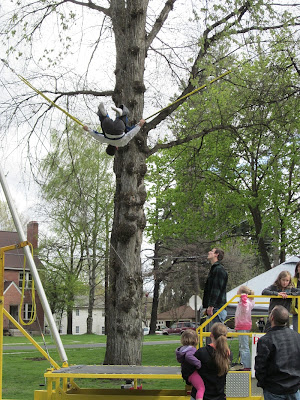 A couple of jugglers on cleverly-disguised stilts. 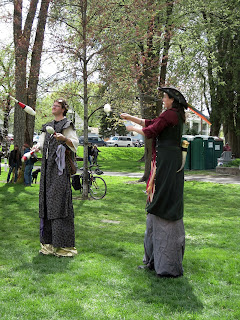 Every year the fair sets up a tent full of "recycled" (i.e. what would otherwise be garbage) materials for children. 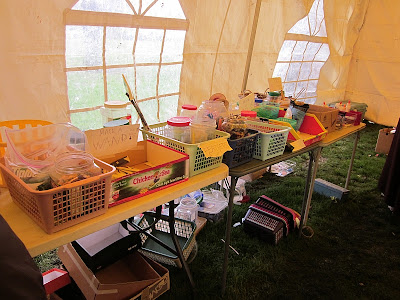 Here children are invited to come in and make glittery crowns or cardboard swords or whatever else they like. Terrific idea. 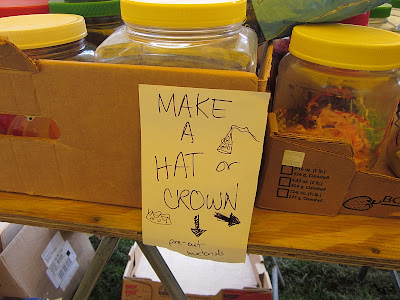 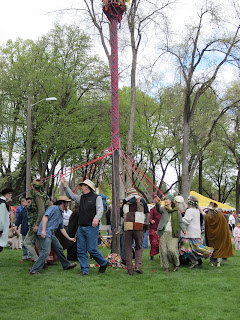 Since it was Younger Daughter's birthday celebration, Older Daughter wanted to find a gift that was the most obnoxiously immature she could find. This was the result of her search. Younger Daughter named it Squishy and won't admit that she's rather fond of it. (It grows on you...) 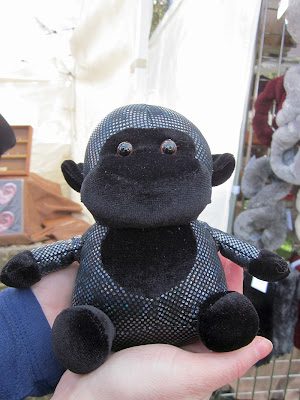 Every year a raptor rehabilitation facility has injured (and therefore unreleasable) birds on display for public education. This is a great gray owl, arguably the largest owl in the world (there are some species which are heavier, but none are bigger). I used to survey great gray owls when I worked as a field biologist in Oregon many years ago, but never had the privilege of seeing one up close. Gorgeous. 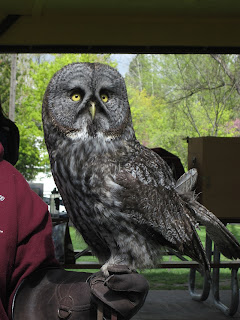 A popular aspect of this fair is the dragon, cleverly made of (mostly) netting so children can go under it. Here are Princess Dragon Snack and Master Calvin, hiding among the colorful ribbons. 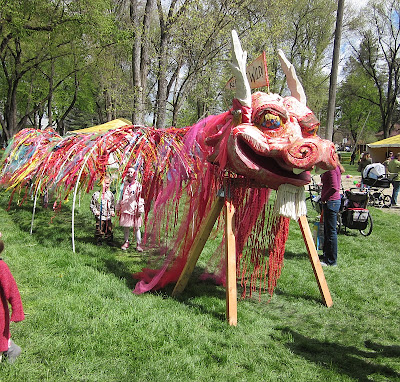 Toward the end of the day, the dragon goes on a parade around the park and all children are invited to participate (which thrills the youngest kids, as you can imagine). Older children support the dragon's lightweight frame on umbrellas. Way cool. 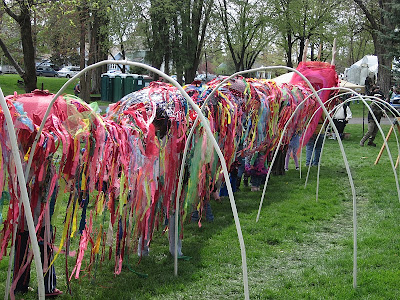 Here's the dragon on parade... 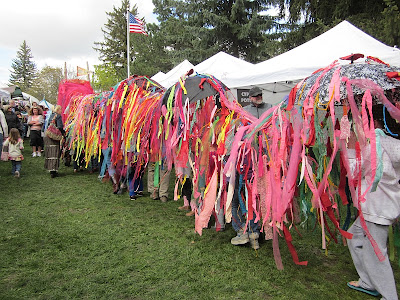 ...with a delighted Master Calvin participating (his older sister was holding an umbrella). 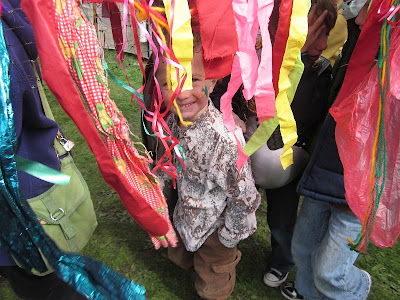 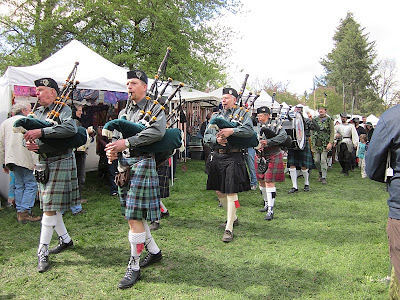 ...with this interesting slogan on their drum ("Caveat auditor") -- which, if my Latin doesn't fail me, means "Let the listener beware." Funny. 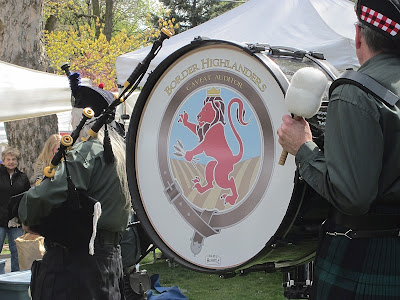 We left the fair in the late afternoon, after which the littlest kids zonked out in the car. As a dear friend used to phrase it, "And a good time was had by all." 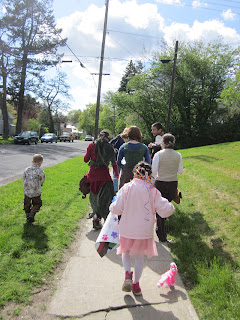 Posted by Patrice Lewis at 7:54 AM