Rockin' out to John Denver

I found this amusing. 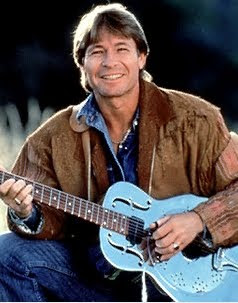 Wisconsin man cited for 'rocking out' to John Denver

FOND DU LAC, Wis. – Police responding to a complaint of loud noise have cited a Fond du Lac man for "rocking out" to the music of John Denver. A cop who responded to the man's apartment last week could hear Denver's music through the door.

The officer pounded on the door but the man didn't answer. Finally the officer found out the man's name from a neighbor and called to him, bringing the man to the door.

When asked why he had the music so loud, the man said he was "rocking out."

The Reporter newspaper in Fond du Lac reported that the 42-year-old was cited for unnecessary loud noise. The ticket could result in a fine of about $210.

The reason I found this so funny is I'm a huge John Denver fan - I have been since I was fourteen - and I've been known (ahem) to "rock out" a few times myself. Or at least belt out his songs at the top of my lungs while doing housework.
Posted by Patrice Lewis at 7:21 AM