This photo has been circulating for over ten years. As a result, many urban legends have sprung up surrounding it, most originating from the pro-life crowd. And with good reason. It's one of the most remarkable pictures ever taken.

For those unfamiliar with this picture, it shows a groundbreaking medical procedure to correct a spina bifida condition in utero. The doctor removed the uterus from the mother, operated on the fetus, and re-inserted the uterus back in the mother. The surgery was successful.

In the midst of the surgery, the baby's hand reflexively grasped the doctor's finger. 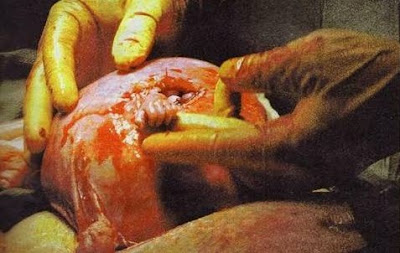 Whatever your views of abortion, I think you'll agree the hand grasping the doctor's finger is NOT a blob of protoplasm, as the pro-abortion proponents would have us believe. Blobs of protoplasm don't grasp fingers. It is a living human being in there, not yet ready to face life. It's easy to see why the pro-lifers adopted this picture to rally for their cause.

Here's some additional information on the surprising controversy surrounding the photo.
Posted by Patrice Lewis at 9:32 PM