Many readers have asked how things are going with little orphaned Anna, whose mother Polly died last Sunday. If there is a shortage of photos with this blog post, it's because things have been somewhat of a rodeo around here and taking pictures was not a priority.

Anna was born on March 2. This puts her at about seven weeks old, far too young to lose her mama -- or her mama's milk.

Therefore our priority was to get Anna to take a bottle. We mixed up calf milk replacer (formula) and heated it to the right temperature, and poured it into a calf bottle. 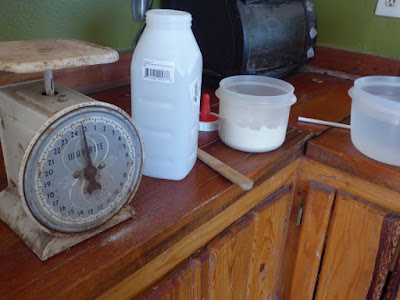 Then we got Anna into a small pen, put a rope around her neck, pushed her against the wall (which takes the "fight" out of a cow), and tried to get her to drink.

We tried and tried and tried. We massaged her jaw and throat; we held the bottle at different angles; we squeezed milk into her mouth (not enough to choke her, of course). It wasn't that Anna was necessarily fighting us; it's just that she wouldn't drink, no matter how long the nipple was in her mouth. After ten or fifteen minutes' of trying, we would get maybe -- maybe -- two or three ounces down her. We tried this five or six times throughout the day, same results.

Anna wasn't alone in the corral. We also had Amy (Matilda's adult calf) and Amy's little unnamed bull calf in there as well. Our last hope was Amy.

Monday night we separated Amy from the two calves, which were tucked into a small pen. This added an additional noise level to our farm. Now it wasn't just Anna bawling; it was also Amy's calf, indignant at being separated from his mama; and Amy herself set up a lot of bellowing. Suffice it to say no one got a good night's sleep.

Yesterday morning Don got up early and we got Amy into the squeeze chute and tried, for the first time, to milk her. Considering she was agitated and annoyed at being separated from her calf and stressed from being in the unfamiliar squeeze chute, she did splendidly. I milked out just a little over a quart, not bad for a first-time milking.

We returned Amy to the barn, released her calf to her, strained the fresh warm milk, and poured it into the bottle. Then once again we tried to get Anna to nurse.

"Come on, little baby, this isn't formula, this is fresh milk," we told her, but she would have none of it.

Frustrated, we released her out of the pen -- and she dove, literally dove, for Amy's udder. She began nursing like there was no tomorrow.

Now lest you think this option hadn't occurred to us earlier, we should point out that Amy hasn't been overly kind to little orphaned Anna. She tends to shove the little brat away whenever she notices her. Therefore we coudn't depend on Amy's uncomplaining cooperation when it came to letting Anna nurse.

But we discovered something yesterday -- when Amy's own calf is nursing, she doesn't really care if there's an extra calf back there. And Anna, canny lass that she is, always positions herself in the very back, as far away from Amy's line of sight as possible. 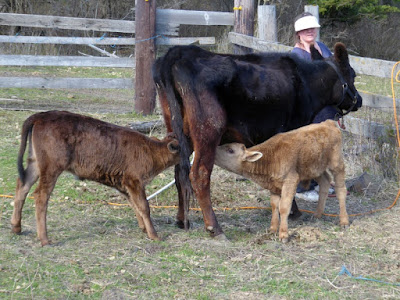 So we devised a new strategy, and so far it seems to be working. At night we separate the calves (this morning all was quiet in the barn until 5:45 am and I slept like a rock). In the morning I milk Amy. Then I lead her back into the barn, release the calves, and hold Amy's lead rope so she'll stand still, so as to allow both calves to take as much milk as they want and need.

Then we release Amy out of the corral to join her herd-mates and graze on the very small amount of fresh grass that's finally starting to grow. The calves stay in the corral, where they have food, water, shade, and shelter.


(Amy's unnamed bull calf on the left, Anna on the right.) 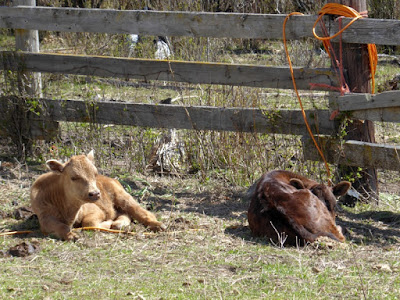 Once or twice during the day, we go get Amy and return her to the corral, where the calves attack her avidly, then we put her back outside. 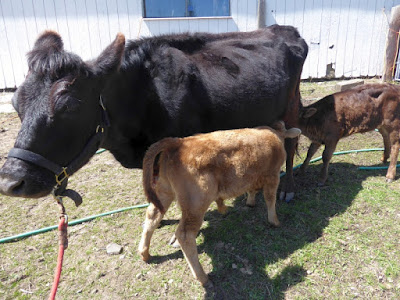 In the evening, we fetch Amy again, and let the calves nurse on her while holding her lead rope. 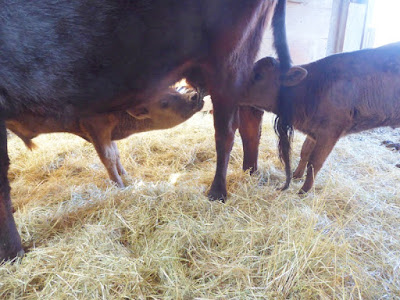 Then we let her loose in the corral with the calves, where everyone settles in with their dinner. Just before dark, we put the calves into the small pen for the night.

So far so good.

Despite her occasional aggression -- more like annoyance -- toward Anna, dear Amy has been an absolute trooper. It's asking a lot of her -- nursing two calves as well as being milked in the morning for us, but her body and milk production will adjust. 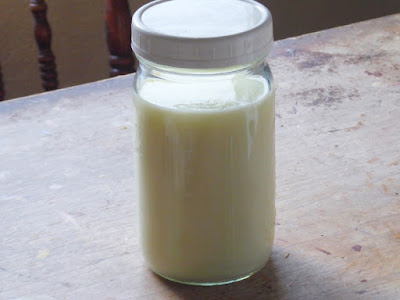 Nonetheless we're going to start graining Amy, something we haven't done for any of our cows in years. We'll also watch her health -- if she gets too skinny, we'll stop the morning milking and just let her nurse the two calves.

This schedule will severely restrict our movements away from home for the next few months, but needs must when the devil drives. We're just so -- SO! -- grateful Amy was in the wings, ready to rescue little orphaned Anna from the loss of her dear mother.

Such is life on a farm.
Posted by Patrice Lewis at 8:07 AM